On June 5, both ICRA and CRISIL downgraded the commercial paper of DHFL to [ICRA] D and CRISIL D, respectively, on account of delay in servicing the scheduled debt obligation worth Rs 950 crore, on June 04, 2019 ICRA and CRISIL have downgraded the commercial paper of DHFL on account of further deteriorating liquidity conditions.

Yet again the debt funds have been hit hard after the rating agencies further downgraded debt papers of Dewan Housing Finance Corporation Limited (DHFL), a non-banking finance companies with a focus on housing finance, as it failed to make the scheduled debt payment on June 04, 2019. Two funds from DHFL Pramerica Mutual Fund--Medium Term and Floating rate--suffered a loss of 53 per cent and 48 per cent respectively in one day. Of the total 163 scheme invested across categories, 91 registered a fall of more than five per cent. Even for an equity fund, such a fall in NAV will scare the investors, for debt funds who deliver close to 7-8 per cent in a year such a drastic fall in the NAV must have sent chills down the spine of the investors.

However, some of the investors may have seen this coming as DHFL has been going through a liquidity crisis and its debt papers have seen a series of downgrades over the past few months. But it had still not defaulted before this.

On June 5, both ICRA and CRISIL downgraded the commercial paper of DHFL to [ICRA] D and CRISIL D, respectively, on account of delay in servicing the scheduled debt obligation worth Rs 950 crore, on June 04, 2019. Both the rating agencies have downgraded the papers from 'watch' to 'negative' ratings, on account of further deteriorating liquidity conditions.

According to filings by DHFL on the exchange, other rating agencies CARE and Brickwork have downgraded other debt papers including fixed deposits and non-convertible debentures on account of delay in the scheduled payment.

As per the rating agencies, commercial paper worth Rs 850 is due for payment in June out of which Rs 750 crore are due on June 7, 2019. CRISIL said with inadequate liquidity and low visibility of fundraising, it expects the CP to default on maturity. Only a miracle can save this default.

The extent of damage

According to the data provided by Value Research, a total 163 (across categories) schemes had exposure to the debt papers of DHFL worth Rs 5,236 crore as on April 30, 2019. 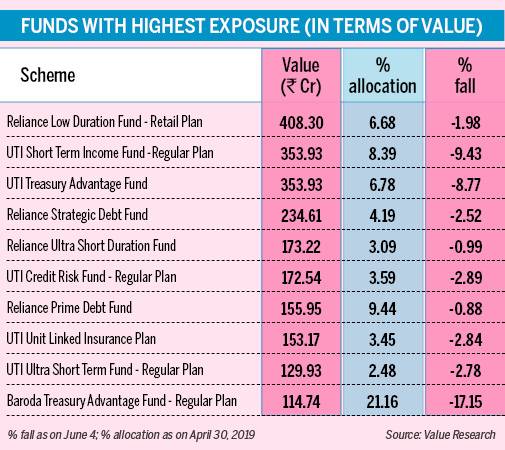 In terms of schemes, Reliance Low Duration had the highest exposure worth Rs 408 crore, however, it accounted for only seven per cent of the assets of the fund. There are two debt funds from UTI--Short-Term Income  and Treasury Advantage with assets of Rs 354 crore each with the second highest exposure to DHFL papers.

In term of percentage three of the DHFL Pramerica Mutual Fund schemes- Medium Term, Floating rate and short maturity had the highest exposure of 37.42 per cent, 31.94 per cent and 30.47 per cent respectively. 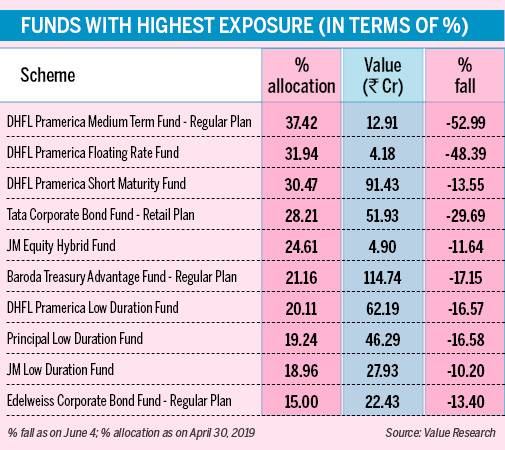 The extent of fall in these funds was higher than the percentage allocation. As the portfolio data is of April, it is possible that to meet the redemption requirements, the funds may have sold few liquid papers during May, which may have resulted in the allocation of DHFL papers going up further.

Also, the fall in NAV will depend on the extent of write off which may go up to 100 per cent in case of unsecured debt papers.

"The damage has already been done therefore investors who have already invested in these funds should wait and watch as there is hope that DHFL may pay the debts as it is trying to sell its assets to pay its debts," says Tarun Birani, Founder & CEO, TBNG Capital Advisors.

Also, DHFL says technically it has one more weeks time to pay the dues. So, investors may stay invested.

Tata Mutual Funds has already given the investors side-pocketing option in three funds--Corporate Bond, Medium Term and Treasury Advantage, which ends on June 14, 2019. SEBI allowed side-pocketing last year. It allows the debt portfolio to be segregated into two parts separating the troubled papers from rest of the portfolio thus protecting the interest of the investors, who were invested in the fund at the time of default and had taken the hit. If the company pays back, same is paid to the investors who were holding the fund units at the time of default.

Under side-pocketing investors are given the option to redeem the units of the mutual funds without an exit load. Those investors who redeem their mutual fund units under this option will get the NAV of the main portfolio.

A piece of advice

The recent multiple rating downgrades have again highlighted the inherent risk in debt fund. Debt funds are not risk-free as they have been at times mis-sold to retail investors. Investors should understand that debt funds have two types of risks one credit risk that is the risk of default (which many debt funds are experiencing right now) while the other is interest rate risk, which is the fall in the NAV due to the interest rate scenario.

Therefore, it is important that investors should understand these risks before investing in mutual funds, which are tax efficient as they provide indexation benefit on the gains after three years.

Mutual funds are not as safe as fixed deposits and if you want the safety of capital it's better to go for fixed deposits. But the tax advantage makes them a good alternative for people in the highest tax bracket. But there are multiple fund categories with different duration and credit risk profile. So, understand which one is best suited for you to achieve the goal before investing.

Also, stay away from funds which take concentrated bets and invest in lower rated papers. Take the advice of advisor if you think you can't do it on your own.