Even as smaller Indian companies are looking to grow their business in the US market, the larger focus is on leading pharma companies because the top 20 of them contribute 75 per cent to total pharma exports from India 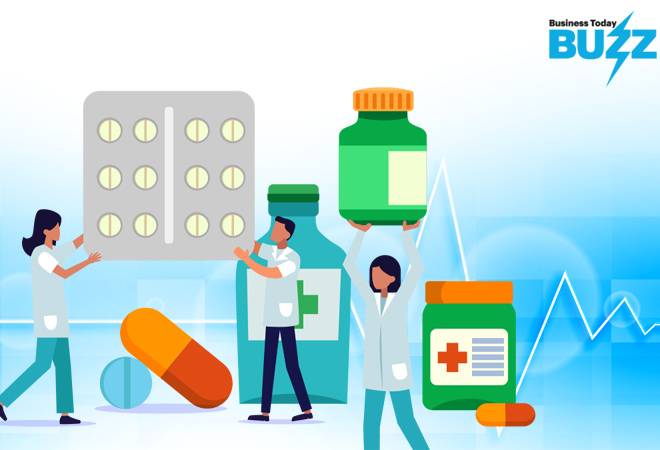 Most leading pharma companies such as Sun Pharma, Dr Reddy's, Lupin, Cipla, Biocon and Aurobindo Pharma concluded the June quarter on a positive note. In many cases, the results surprised the markets against expectations. The common link running across company results was a better showing in the US market, partly driven by lower expenses (Sun Pharma and Dr Reddy's) and stronger growth in markets outside the US (Dr Reddy's).

Analysts point out that lower expenses were largely driven by reduced R&D spending in the quarter, which is expected to increase over the next quarters. Better results were also on account of improved growth in the Indian market. However, one of the reasons for better growth in the domestic market was the low base. The sector had seen periods of negative growth post the introduction of goods and services tax. Even now, many domestic pharma companies complain of an environment that does not enable new investments as focus is more on reducing drug prices. Some industry players, who declined to be identified, pointed out that their distributors have started reducing inventory from about 40 days earlier to around 25 days today, which is hurting pharma sales. 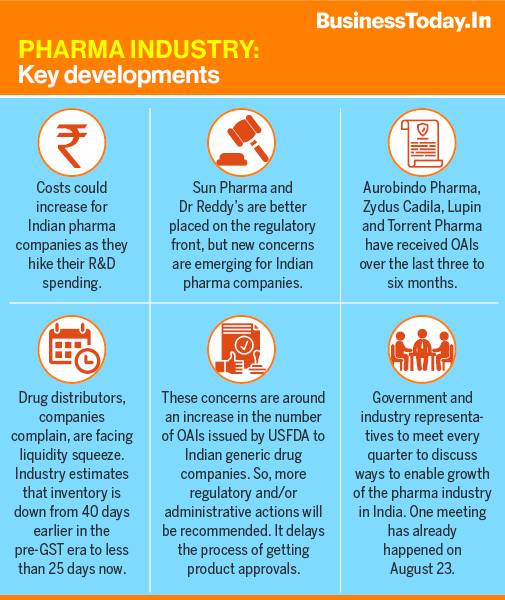 Even as smaller Indian companies are looking to grow their business in the US market, the larger focus is on leading pharma companies because the top 20 of them contribute 75 per cent to total pharma exports from India. These are big numbers. Out of the $38 billion that the Indian pharmaceutical industry generates by way of revenues, little over $19 billion comes from exports. The US alone contributes close to $6 billion to this.

Meanwhile, Q1 results of pharma companies need to be seen in the context of an industry that has been reeling under regulatory overhang from the US drug regulator - US Food and Drug Administration (USFDA) - on the back of intense competition, buyer consolidation and price erosion in the US, the biggest market for many pharma firms outside India. On the regulatory front, Sun Pharma, the biggest Indian pharma company, has made some progress, while Dr Reddy's, which could resolve warning letters by the US drug regulator against its two other facilities, is awaiting inspection only on one facility.

So, where should pharma companies focus on in the days ahead? Global data and consulting company IQVIA, formerly known as Quintiles and IMS Health, in a study in February pointed out, "Declining prices in the generics market due to rising competition from the surge in ANDA (Abbreviated New Drug Application) approvals and consolidation of distributors, has taken a toll on the generics market value. Although generics market size has grown in the past from $47 billion in 2012 to $71 billion in 2017, the annual growth rate has been constantly declining from 22.8 per cent in 2013 to 0.8 per cent in 2016. The trend is likely to continue for the next few years with even negative growth rates before the market stabilises and comes back on track by around 2020."

Analysts point out that the US market is not really about growing with the market but gaining the market share in a market that has been seeing a declining rate of growth. This requires quicker approvals to market products in the US. When companies such as Teva, Mylan and Sandoz announce that they are walking out of certain products, it opens up opportunities for Indian pharma companies to fill in the gap, something that Indian companies have done in the past.

Notably, the patent cliff that had appeared in 2014/15 is now behind us. It also means that scope for the extraordinary 10 to 12 per cent growth is unlikely to happen. The growth rate in the US market could therefore be in the single digit. This typical cycle follows every time major product patent expiry period is crossed and the scope for generic players to enter arises. For instance, in late 2011, global major Pfizer's patent on Lipitor, its blockbuster anti-cholesterol drug , expired in the US, then it went generic.

If Indian companies manage to come up with even low double-digit growth, it will still be a formidable achievement because that would imply an ability to gain market share from multi-national companies. Analysts point out that today, Indian companies hold close to 70 per cent of market share of Lipitor generic in the US. The generic market of Detrol LA, a drug used to treat frequent urination, was initially controlled by global companies but later Indian companies such as Torrent Pharma carved out a major chunk of the market share. Today, in terms of value, Sun Pharma along with Taro contribute $2 billion to US generics. Dr Reddy's, Lupin and Cipla put together contribute close to $4.5 billion. Other Indian companies such as Intas and Mankind put together, could be at around $4 billion. All combined still holds a small share in the total value of the market. So, there exists huge potential in value terms. It is not surprising, therefore, that leading Indian pharma companies are talking of complex generics, where volumes could be low but potential is high - inhalers, select oncology drugs, insulin or long-acting injectibles.

Quick approvals are what needed in a competitive environment. The Chinese, European and US companies are not going to sit back and watch. Analysts feel Indian companies need to cover some distance in their research and development (R&D) part. If a company gets its facilities right along with the product R&D and correct filing, it will be in a better position to get the approvals. Most are still grappling with getting the facility-compliance in place.

However, new challenges have emerged on the approval front over the last three to six months. This is because the number of Official Action Indicated (OAI) that the USFDA has issued to Indian generic drug companies has gone up. Issuing of an OAI means the regulatory and/ or administrative actions will be recommended. It is usually issued when the regulator finds a plant to be in an unacceptable state of compliance in relation to good manufacturing practices. If there is an OAI, it means regulatory approvals could get delayed. Some of companies that have received OAIs over the last three to six months include Aurobindo Pharma, Zydus Cadila, Lupin and Torrent Pharma.