According to S Eswara Reddy, the Drug Controller General of India (DCGI), the new rules for regulating e-pharmacies are expected to make it mandatory for all online pharmacy players to get registered with the central government The current regulatory environment for e-pharmacies needs clarity, as two courts - Madras High Court and Delhi High Court - have given conflicting orders in past.

Imagine a young man living in the US uploading a doctor's prescription online and getting medicines delivered back home in India to his ageing parents. This could soon be a reality, according to S Eswara Reddy, the Drug Controller General of India (DCGI). He says the government has finalised the rules after receiving comments from various stakeholders. The rules are currently under active consideration of the health ministry. Once approved, the new rules to regulate the sale of medicines online will come into force.

The current regulatory environment for e-pharmacies needs clarity, as two courts - Madras High Court and Delhi High Court - have given conflicting orders in past. The former stayed the ban on sale of medicines online, while the latter upheld the stay on sale. 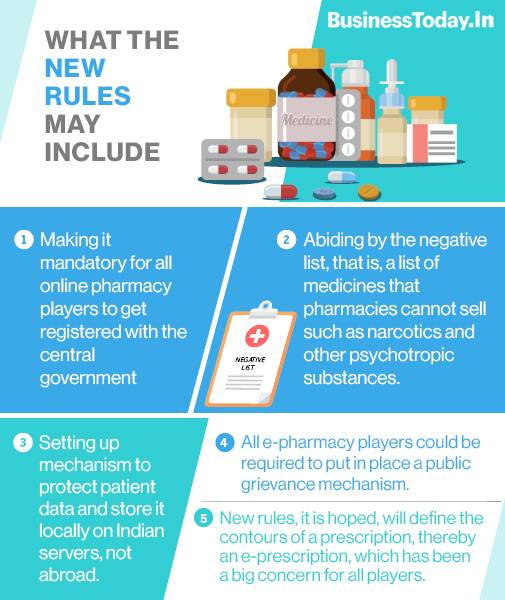 Offline stores dominate the pharmacy space spread across 7-8 lakh retail outlets with a market size of around Rs 1,30,000 crore. Pharmacy chains such as Apollo Pharmacy and MedPlus lead the space. Different reports suggest online market size anywhere between Rs 3000 crore and Rs 7,000 crore with several small players and about half a dozen leading players such as Netmeds, 1mg and Medlife.

Offline players, particularly single store entities, are apprehensive about disruptions that online players may trigger given their penchant for dishing out big discounts. However, analysts feel due to discount model (as much as 20 per cent out of around 25 per cent margin), e-pharmacies will continue to burn cash considering each player, whether online or offline, go to same stockists to procure medicines. The remaining margins that they retain (between 5 to 8 per cent) post discounts, are inadequate to compensate for huge logistics costs and other warehousing expenses that e-pharmacies need to incur.

While one may argue that it is in the nature of the online business to burn cash initially, analysts believe the discount model will not be sustainable in the pharma space and eventually e-pharmacies will have to review their discount strategies. Meanwhile, offline players, especially mom-and-pop pharmacy stores or single store promoters, expect a decline in footfalls. They may have to shell out discounts in line with what online providers offer.

Analysts and some of smaller stores argue that larger pharmacy chains may still be able to provide discounts and survive thanks to economy of scale. At the moment, all are waiting to see what the regulator will do to ensure that new rules on e-pharmacies do not disrupt the market to a great extent. However, offline providers can work with customer-mix as most offline players give discounts of 10 per cent or more only  on high ticket items and almost no discount on small ticket purchases - say under Rs 200.

The nature of product demand may also differ. Typically, online players are likely to see more demand for chronic medications - lifelong need - such as those for hypertension or diabetes. Patients are unlikely to order home delivery for antibiotics, pain-killers and urgent antidotes such as tetanus injection; all that requires immediate attention.

DCGI Eswara Reddy is, however, hopeful that the new rules, once in place and implemented, will address most of concerns. The new rules are expected to make it mandatory for all online pharmacy players to get registered with the central government. They may be asked to abide by the negative list, that is, a list of medicines that pharmacies cannot sell such as narcotics and other psychotropic substances. They may also have to lay down measures to ensure patient data protection. Data could be needed to store locally on Indian servers, not abroad. There could be a provision to inspect online registration holders to check if they are following the norms and dispensing medicines against prescriptions as defined under the new rules. All e-pharmacy players may also be required to put in place a public grievance mechanism. They may have to run 24x7 grievance cell for patients and for those who require details of a drug. Most importantly, the rules are expected to clearly define the contours of a prescription, thereby an e-prescription that is a big concern for all players.

Dr Madhukar Gangadi, the founder of MedPlus chain of pharmacy stores, expects "more clarity on the definition of e-prescriptions" and hopes the government will try to address some questions such as how and when the measures would be put in place to enforce the new rules, what kind of prescription changes will be put in place for offline stores and measures to check unhealthy business practices. MedPlus is the second largest offline pharmacy chain in India after Apollo and has about 1700 stores across seven states - Andhra Pradesh, Telangana, Karnataka, Tamil Nadu, Maharashtra, Odisha and West Bengal. Meanwhile, offline pharmacy chains may launch their own online arms and start giving out digital bills and electronic receipts instead of paper bills.