FSSAI could be willing to bring the change from the top, but Indians will become more health conscious if the authority also sustains its customer outreach, as changes in food habits need to begin from home. 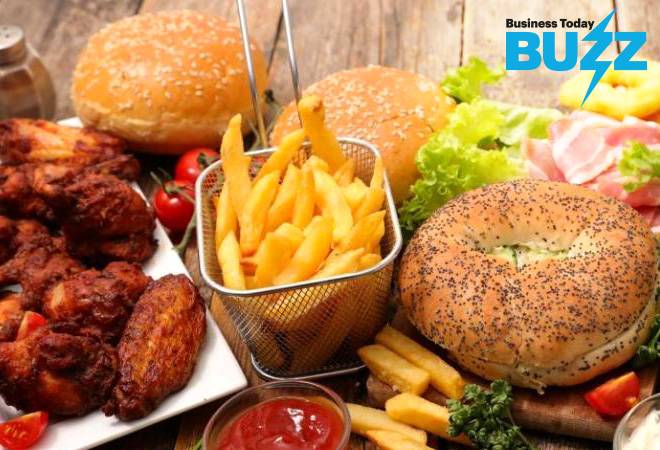 In the last week of June 2019, FSSAI came out with a draft notification Food Safety and Standards (labelling and display) Regulations, 2019 to enable citizens to know more about the composition of food products, for making informed choices.

A homegrown snack food, traditional sweets and restaurant chain company recently decided to reduce the salt content of raita, an Indian condiment, served across its food outlets. The decision did not go well with customers who started complaining about the taste difference. The company reasoned that it was a healthy practice that they intended to follow, but ended up providing extra salt powder to those who insisted on the 'authentic' taste.

What prompted the company to experiment this was a  commitment it had made to  the Food Safety and Standards Authority of India (FSSAI) a year ago, to make its food service outlets a responsible place to eat by voluntarily promoting safe and healthy eating practices through the introduction of recipes with reduced fat, sugar and salt.

An extra sachet of sugar, salt or ghee could perhaps enable Indian food service industry (National Restaurant Association of India estimates the market size of the sector at Rs 4,23,865 crore in 2018-19) maintain a balance between their commitment to be a responsible eatery and keep their customers happy.

In the last week of June 2019, FSSAI came out with a draft notification Food Safety and Standards (labelling and display) Regulations, 2019 to enable citizens to know more about the composition of food products, for making informed choices. The notification said that "in a bid to encourage consumers make healthier food choices", the draft regulation calls for mandatory display of "red colour-coding on front-of-the-pack labels on packaged food products that have high-fat, high-sugar and high-salt content levels". 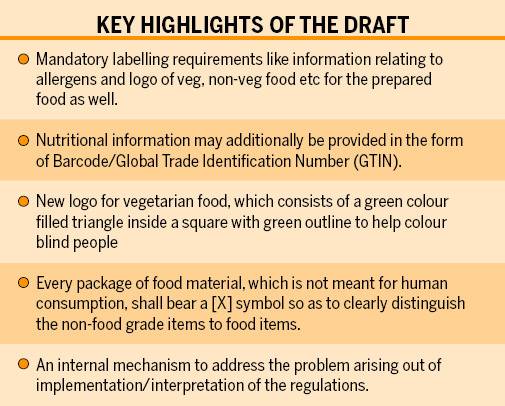 This requirement, proposed to be implemented in a phased manner over three years is what is worrying the industry. "Once it is implemented, 90 per cent of Indian products will have red labels. All your heritage drinks and rasgullas will be framed as bad products. They (FSSAI) want all Indian ethnic and traditional foods to be stopped," Subodh Jindal of All India Food Processors Association (AIFPA) complains.

The packaged food companies have also been asked to declare nutritional information such as calories (energy), saturated fat, trans-fat, added sugar and sodium per serve on the front of the pack. In addition, food labels will declare per serve percentage contribution to RDA (recommended dietary allowance) on the front of the pack. But, the 'colour coding' is what troubles the industry most as it tends to show their products in poor light while the health 'risks' associated with every such product is purely based on the quantity of consumption, frequency of consumption, health of the consumer and a host of other factors.

Pawan Kumar Agarwal, CEO, FSSAI, is well aware of challenges ahead. "While we were developing regulations, we knew as a nation we should move towards a reduction in salt, sugar and fat consumption in the country as the current level of per capita consumption (of all three) are high. So, we started off with a campaign. On July 10, 2018, FSSAI launched the Eat Right India campaign and in that function, several companies had given their voluntary commitment to reduce the salt and sugar content in their products," he says.

On 16 October 2018, FSSAI flagged off a 'Swasth Bharat Yatra', a pan India cyclothon, to spread the message of 'Eat Right Movement' across the country. The six-track cycle rally that began from six different locations covered the entire country and culminated in New Delhi in January, 2019. "Swasth Bharat Yatra was aimed at creating the mass awareness. A slew of measures is needed. But this change has to come from the top (processed food producers). This by no way meant to decelerate the growth of food processing sector. FSSAI is committed to innovation, but that does not mean you produce unhealthy foods," Agarwal says.

In fact, the new labelling requirement is the last of a series of amendments FSSAI has  been planning to promote healthy diet and food safety. As part of its supply and demand side interventions, it want food labels to serve as a primary link of communication between the manufacturer and consumer and cover both food safety and information of consumer interest.

The comprehensive revision of Food Safety and Standards (Packaging and Labelling) Regulations, 2011 saw the drafting of three separate regulations to specifically deal with packaging, advertisement and claims and labelling. The FSS (Packaging) Regulations and FSS (Advertising and Claims) Regulations were notified in 2018. The labelling one is the last in the series.

In addition to the nutritional information and colour coding, the new labelling regulation also prescribes provisions for labelling food allergens as an important tool to reduce risk of exposure and prevent anaphylaxis for individuals with food allergies.

Days before the draft notification, Mondelez International, the makers of Cadbury chocolate and Oreo biscuits, announced the launch of a new variant of its popular Diary Milk Chocolate with 30 per cent less sugar content in the Indian market. "This is the most significant innovation in the brand's history in India. As we continue to define the taste of chocolate, we understand our consumers, and are conscious of our commitments to them. Cadbury Dairy Milk 30% Less Sugar is another very special innovation that will provide our Cadbury Dairy Milk fans with a less sugar option without compromising on our world-renowned taste and quality," Deepak Iyer, President, Mondelez India, said.

The company states that the new less sugar variety has been in development for almost two years with a dedicated team of scientists, nutritionists and chocolatiers at the company's research and development facilities in India and the UK. "The team has been working to find a way to achieve the much-loved Cadbury Dairy Milk taste whilst delivering 30 per cent less sugar with no added artificial sweeteners, colours or preservatives. By harnessing our leading-edge understanding of ingredient technologies and taste science, the team successfully replaced the physical functionality of the sugar in solid chocolate in a way that preserves the structure of chocolate and stays true to the unique texture and taste profile of Cadbury Dairy Milk."

Last year, Swiss multinational food and beverage giant Nestle had also announced a similar launch where a new variety of Milkybar Chocolate contained 30 per cent less sugar while retaining the taste. The company is known to be working to reduce sugar content in all its products by 10 per cent without any change in taste.

With its Eat Right India campaign, FSSAI is also joining global food regulators that are trying to get industries cut down on the sugar content on their products.

"We recognise it is a contentious issue. Therefore, we have taken a lot of time even to come out with the draft. In fact, we even withdrew an earlier draft a year ago when we found out there were more views to be heard. An expert committee (with a cardiologist and two eminent nutrition experts as members) was formed to look into the matter. Views of all stakeholders were considered before preparing the current draft," Agarwal says.

The authority though is willing to address all issues that are pending. It will accept suggestions and objections from stakeholders until July 31. It has also proposed a three-year multi-phase implementation timeline for the new regulation to become applicable in the country.

Food processors, especially small and medium scale units are in no mood to relent. Coming days will see intense lobbying from both sides and the implementation of the regulation will depend on the outcome of pulls and pressures that are likely to follow now.

FSSAI could be willing to bring the change from the top, but Indians will become more health conscious if the authority also sustains its customer outreach, as changes in food habits need to begin from home.