Numbers speak for themselves. Non-performing assets (NPAs) under Mudra have doubled in absolute terms to Rs 17,651 crore over the last two years

A Reserve Bank of India (RBI) committee on micro loans has advised to double the maximum loan cap on collateral free Mudra loan under the Pradhan Mantri Mudra Yojana (PMMY). However, there are concerns around asset quality deterioration. The fact that Mudra loans that have been extended for tenures of three to five years are yet to complete their first full cycle to provide any significant insight into non-performing assets (NPAs), the idea seems inadvisable.

The committee headed by the former Chairman of Securities and Exchange Board of India (Sebi) U K Sinha has proposed to increase the limit from Rs 10 lakh to Rs 20 lakh. The nine-member committee had two bankers and an RBI official, but none of them have dissented. For many bankers in Mumbai, the new recommendation of giving collateral free loans with a target including geographical targets is nothing but a risky proposition.

Numbers speak for themselves. Non-performing assets (NPAs) under Mudra have doubled in absolute terms to Rs 17,651 crore over the last two years. The NPA in percentage terms doesn't look alarming at over 2.50 per cent, but NPA figures hide more than they reveal, say experts. Normal NPAs in micro loans (less than Rs 1 crore category) are above 8-10 per cent. So, what are main gaps in the four-year old scheme and how should they be fixed before scaling it up? "There should be alternative tools to assess the creditworthiness of borrowers who do not have collateral. The government should encourage an ecosystem of free flow of data (from various government sources), which will help in lending based on cash flows," advises R Gandhi, former Deputy Governor, RBI. Rajnish Kumar, Chairman, State Bank of India agrees. "We haven't seen high level of delinquencies in Mudra loan."

The Mudra scheme had been started with an objective for banks to provide loans up to Rs 10 lakh to the bottom of the pyramid to start a business (mobile repair, beauty parlour) and support existing micro enterprises. The very idea of giving loan targets does not work in case of commercial enterprises. Within a year of the launch, the government had started giving geographical targets as well with the help of Mudra Agency, the nodal agency to facilitate loans through banks and non-banking financial companies. Currently, many banks have managed to achieve targets as they bracketed their earlier schemes of giving micro loans under Mudra umbrella - Shishu (up to Rs 50,000), Kishore (Rs 50,000 to Rs 5 lakh) and Tarun (Rs 5 lakh to Rs 10 lakh). After Mudra loans scaled up above Rs 7 lakh crore, banks started finding it hard to meet targets. The target for banks in 2018-19 was Rs 3 lakh crore. Banks and NBFCs put together disbursed only Rs 1.87 lakh crore by February 2019. While banks did manage to achieve the target in next two months, but by doling out a large number of loans in jiffy. Many banks are meeting these targets by buying out portfolios of small finance banks and NBFCs. Bankers in private say that there should not be a push by way of targets. "It should be left to the judgment of banks with an overall thrust on micro loans," says a banker.

Some experts question the banking model of funding micro enterprises. There are full-scale banks such as Bandhan Bank and a dozen small finance banks, which specialise in micro loans. These new banks are best suited to disburse Mudra loans profitably. Experts suggest RBI should encourage these new entities, especially small finance banks to scale up. The new RBI Governor Shaktikanta Das has recently decided to offer small banking licenses on tap. 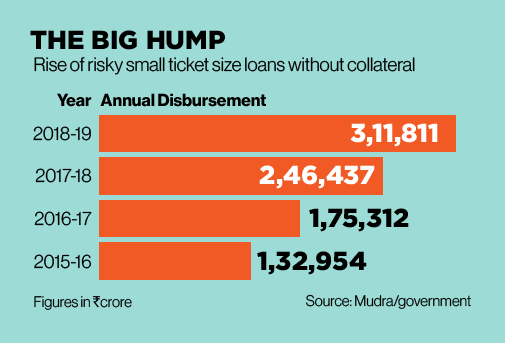 The use of new digital tools is another area where Mudra Agency can do a lot as new fintech players have devised ways to finance micro loans based on returns on goods and services tax and other proxies. Public sector banks, which are dominant players in disbursing Mudra loans, do not have digitised tools or flexibility to work with fintech players to get genuine borrowers on board. Similarly, the NPA analysis of difficult regions or sectors is also not there. The use of technology or latest tools are must in case of small sized loans as operational cost increases with the high volume and lower ticket size loans. Banks need to build red flags in the system. There are social media tools in the digital world and proxies like GST return filings and other databases that help in building a good risk management system. Instances of fraud are another challenge. There have been over 2,000 such cases so far where people fled with banks' money. There are also instances of fund diversion.

The Mudra nodal agency has to play a greater role in building capabilities within the organisation. The RBI committee on micro loans talks about skills such as underwriting and risk management. In fact, Mudra should be able to raise funds on its own as it enjoys a triple A rating. "A re-imagining of Mudra is necessary including assessing the rationale for continuing it as a subsidiary of SIDBI," states the report. Ideally, Mudra should have higher refinancing limits for banks. Currently, the government is not providing funds and banks are funding it from their own balance sheet. The guarantee offered by Mudra too is insufficient. In collateral free loans, a guarantee from a nodal agency plays a big role as it provides comfort to lenders. The former RBI Governor Raghuram Rajan had earlier cautioned that the next crisis in India's banking sector could come from loans extended to un-organised micro and small businesses (Mudra) and credit extended through Kisan Credit Card. It's high time to overhaul the scheme before it turns unmanageable the way corporate lending did over the last three-four years.