The industry growth in double-digit looks unlikely in near future as most analysts still estimate it to be in the range of 8-10 per cent, going forward

The going has been good for leading information and technology (IT) companies in India. IT giants such as Tata Consultancy Services (TCS) and Infosys posting a robust growth in the March quarter have only added to the enthusiasm. However, the industry growth in double-digit looks unlikely in near future as most analysts still estimate it to be in the range of 8-10 per cent, going forward.

"TCS and Infosys is by no stretch of imagination a reflection of the market. We are expecting only around 7.5 to 8 per cent growth for the overall market. The growth has been sluggish because the client decision-making has been sluggish for past few quarters. Therefore, at an overall level, we feel, 2019-20 will not be very different from 2018-19," says Sudin Apte, CEO and Research Director at Offshore Insights. He feels there are isolated cases of companies - both in large and mid-cap space -- that are doing well and standing out but that should not be seen as reflective of overall IT sector. These include TCS, Infosys, L&T Infotech and Mindtree. Even leading players, while talking about their growth, mention it in the context of the environment. For instance, Rajesh Gopinathan, Chief Executive Officer and Managing Director, TCS, said, "This is the strongest revenue growth that we have had in the last fifteen quarters. Our order book is bigger than in the prior three quarters, and the deal pipeline is also robust. Despite macro uncertainties ahead, our strong exit positions us very well for the new fiscal."

"In the current  quarter, TCS and Infosys have done well but we are talking about the future and from what we can gather going forward, there will be demand headwinds, which could be a major concern. Also, the large deals that some of the leading companies like TCS and Infosys have talked about in the last four to five quarters adding to their growth momentum, may not be so free-flowing," cautions Sudheer Guntupalli, Technology Analyst at Ambit Capital.  He points out that in-line with expectations, BFSI (Banking, Financial Services and Insurance) and Retail in US were the verticals which benefitted the most because of trickle down of US tax reforms. "We don't expect BFSI to be as supportive as in the past year. Post the negative surprise related to US Federal Reserve's March 2019 indication of no rate hikes in CY19, we foresee further caution or even budget cuts," he adds. This should reflect its impact in next two quarters, especially for the companies that have higher exposure to BFSI and Retail, which typically covers most of leading Indian IT companies barring Tech Mahindra that has a relatively lower exposure to these verticals. 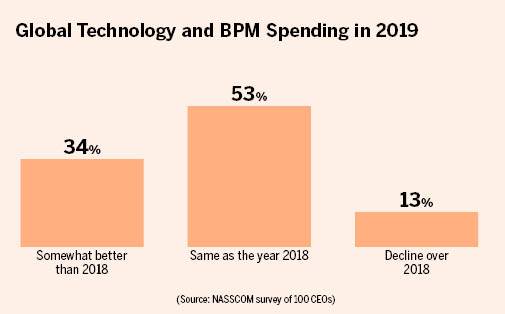 Add to this, he says, a scenario of decline in IT budgets in CY19 or even a deceleration (for example, JP Morgan) would be a double whammy for Indian IT. "Given the pricing pressure here, any such tilt implies that IT sector will have to overcome this pricing pressure in order to report the same FY19's growth."

Not quite willing to see this as a scenario where the best may be behind us (unlike some who believed the best was indeed behind us), Aniket Pande, lead analyst-  IT and telecom, Prabhudas Liladhar, preferred to see it only as a scenario where the headwinds seemed more than tailwinds as compared to last year with supply side concerns coupled with macro-level concerns.  He feels most of the mid-cap companies need to be more cautious now. 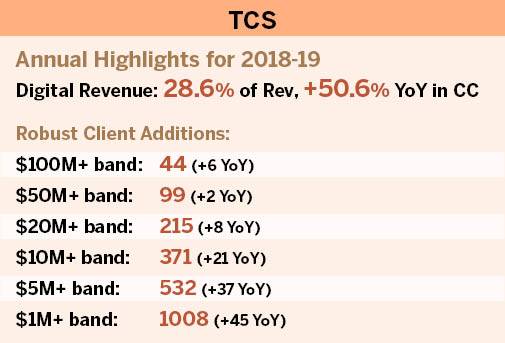 What may add to the problems is supply side constraints as companies need a ramp-up in digital talent and larger share in revenues from digital services. In fact, it is here that most analysts expect to see some hit. According to a senior official of a leading Indian IT company, who did not wish to be identified, "There is no dearth of demand for digital but the problem is expected in the gap between demand and the available talent, making it all the more necessary to invest more into re-skilling." Describing the overall scenario as still very positive for the IT sector, B V R Mohan Reddy, founder and executive chairman of Cyient and the former chairman of Nasscom, feels given the increasing demand for digital services, the biggest challenge for the industry is going to be around re-skilling or up-skilling people, which is where the Nasscom's initiatives on future skills development become important.  For most leading players, digital services is still at about a third of total revenues. The digital rates are better than traditional services at the gross margin level but apparently, the cost of selling these services is higher than the cost of selling traditional services, which may be one reason why at the EBITDA margin level, the digital services do not seem higher than return-fetching traditional services. 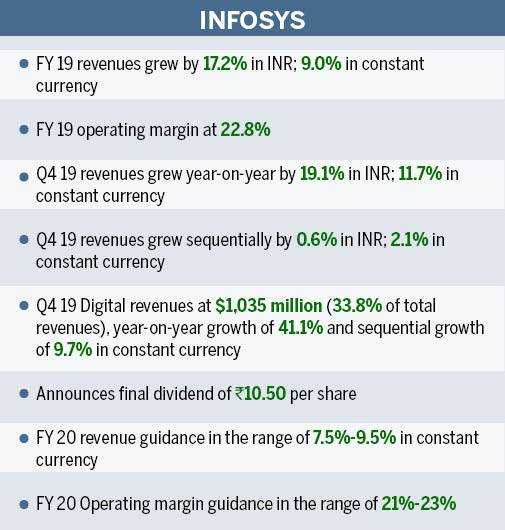 Some within the industry still feel the immigration of talent from India to US is going to be a big challenge, which is why they will need to invest more in localisation (hiring locally) but this may lead to more onsite cost, which in turn could impact margins. While BFSI is the key vertical for most Indian IT companies, the concerns in retail, another major vertical for major players, also cannot be overlooked. "Recent earnings season hinted at continued robust outlook in retail. However, given a steady decline in US' consumer confidence and the usual volatility of IT spend in this vertical, we expect that to be unlikely. It may take 1-2 more quarters for these demand headwinds to translate into deceleration in these two verticals," says Guntupalli of Ambit Capital.