Budget 2020: According to the government's MNREGA website, person days generated so far stood at 208.54 crore in the current fiscal

The budgetary allocation for Mahatma Gandhi National Rural Employment Guarantee Program (MGNREGA) has been decreased when compared with the revised estimate of FY 2019-20, despite an acute funds shortage faced by the employment guarantee scheme.

In the Union Budget 2020-21, the government has allocated Rs 61,500 crore for MGNREGA scheme, which is lower than last year's revised estimates of Rs 71,002 crore by 13.4 per cent. The government had allocated Rs 60,000 crore to this program in the Union Budget 2019-20 but the allocation was later increased by around Rs 11,002 crore as the year progressed. The allocation towards this program has seen a consistent year-on-year decline between FY16 and FY19 at 29.1 per cent, 14.4 per cent and 12.1 per cent, respectively. This, however, jumped by nearly 15 per cent after the allocation was revised in the current fiscal. Overall, the government's expenditure towards centrally sponsored schemes has marginally improved to 7.3 per cent in FY21 from 7 per cent growth in the revised estimates of FY20. 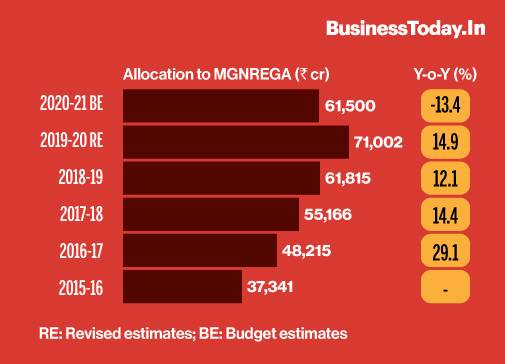 According to the government's MNREGA website, year-to-date percentage utilisation of total available funds currently stands at 83.6 per cent compared to a little over 100 per cent in the previous fiscal. In the past four years though, the only year 2017-18 saw utilisations below 100 per cent, at 97.9 per cent. Person days generated so far stood at 208.54 crore in the current fiscal. This measure stood at 267.98 crore in the fiscal year 2018-19.