Union Budget 2019: More than 26.25 lakh people have been admitted across the country under Ayushman Bharat. To this end 15,224 hospitals have been empanelled.

However, this appears to be only the beginning of the scheme that aims to bring 50 crore people under its ambit, as mentioned in the BJP manifesto. The BJP government also plans to set up 1.50 lakh Health and Wellness Centres (HWC) under the scheme by 2022. 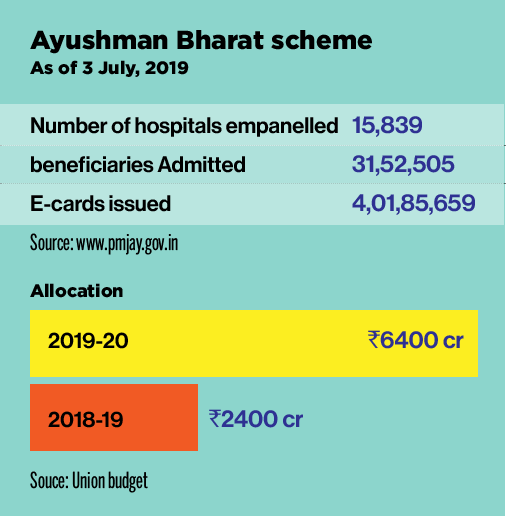 The BJP government is also planning to provide telemedicine and diagnostic laboratory facilities at the HWCs by 2022. It will enable quality primary medical care to the poor at their doorstep. They also plan to create an essential devices list and a separate pricing policy for medical devices to ensure their accessibility to the masses.

Additionally, the BJP mentioned in its manifesto that they are planning to start 75 new medical and postgraduate medical colleges. Increase in the number of childcare facilities threefold, reduction of malnutrition, reduction in cases of tuberculosis and increase in the doctor-population ratio to 1:1400 are also part of the BJP's plan for the healthcare sector.

The BJP government is also trying to get four more states - Delhi, Odisha, Telangana and West Bengal - that had opted out of the Pradhan Mantri Jan Arogya Yojana (PM-JAY), under its ambit. "It is important that the benefits of the visionary scheme like Ayushman Bharat should reach all deprived and vulnerable people in the country. I will make all efforts to convince the remaining states and Union territories (UTs) to bring the benefits of the scheme to their people and ensure that no eligible person is deprived of these benefits," said health minister Harsh Vardhan.