Covid-19 vaccine: How much can Serum Institute, Bharat Biotech jack up prices?

If their previous statements are any indication, hiked prices of vaccines could be anywhere between Rs 1,000- Rs 2,000. Poonawalla had earlier said the vaccine could be sold at Rs 1,000 per dose to private players, while Bharat Biotech's Krishna Ella said prices were likely to go up initially 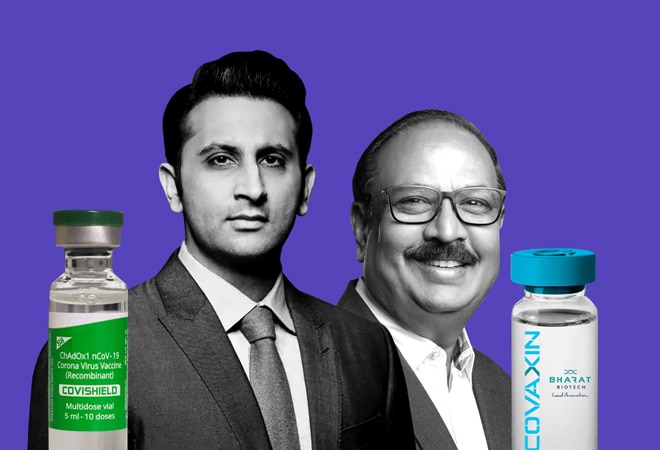 Within just the past 10 days, India's active case tally has doubled from 10 lakh to 20 lakh, making it the second-worst affected nation

India has allowed vaccine makers like Serum Institute of India (SII) and Bharat Biotech to fix vaccine rates at "liberalised" rates while opening up vaccination for all above the age of 18.  During Prime Minister Narendra Modi's meeting with top health department officials, the government decided that its Phase-3 vaccination strategy will focus around "liberalised vaccine pricing and scaling up of vaccine coverage".

What this means is that companies will be able to raise prices when they sell the vaccines to states and private players. Companies are expected to plough in the profits they make to significantly scale up operations to meet country's growing demand. Apart from helping in augmenting vaccine production and availability, the move will also "make pricing, procurement, eligibility and administration of vaccines open and flexible", the government statement said.

As per the Centre, vaccine makers will have to set aside 50 per cent of vaccine doses to the central government for carrying out  ongoing free vaccination drive for those above the age of 45, while the rest can be allocated to states and private players at pre-fixed rates. The companies need to disclose the price of the vaccines to be distributed to states and private players before May 1, the date when phase 3 of the vaccination will start.

"Private vaccination providers shall transparently declare their self-set vaccination price. The eligibility through this channel would be opened up to all adults, i.e. everyone above the age of 18," the statement added. The decision to open up vaccines for everyone above 18 has been hailed across the board but many are wondering if the price of vaccines will be much higher than what the government is currently charging.

Under the agreement with the central government, both Serum and Bharat Biotech are supplying vaccines at Rs 150 and Rs 206, respectively (excluding taxes). If previous statements of vaccine makers are any indication, the hiked prices of vaccines could be anywhere between Rs 1,000- Rs 2,000. Adar Poonawalla, chief executive of the world's largest vaccine maker Serum Institute, has said in the past that the vaccine could be sold at Rs 1,000 per dose to private players, as against Rs 200 for the government.

"We have given a special price of Rs 200 for the first 100 million doses only to the Government of India on their request that we want to support the common man, vulnerable, poor and healthcare workers. After that, we'll be selling it at Rs 1,000 in private markets," Adar Poonawalla had said on January 12.

Poonawalla during his previous interactions had also said that vaccine companies were sacrificing on what he called "super profits" by selling vaccines at $2-3 per dose (roughly around 200). "The average price of this product (vaccines) is $20 upwards in the world," he had said in a TV interview on April 6.

In January, Bharat Biotech chairman Krishna Ella had said the prices of vaccines could go up initially. "In the beginning, the cost may be a little higher in the vaccine field, but as the scale-up of production increases, when market competition builds up, the price is automatically controlled by the market," he had said.

Similarly, Russia's Sputnik V, which has been given approval in India, is expected to be priced around $10 per dose. As per the Russian fund, the price of Sputnik V is less than $10 per shot globally, but it's still in discussions with the government to fix the price for India.

India's rising Covid tally has forced the government to double down on its action against coronavirus. Within just the past 10 days, India's active case tally has doubled from 10 lakh to 20 lakh, making it the second-worst affected nation after the US. High prices of vaccines could block access to millions as not everyone from the non-priority group will be able to afford them.

Also read: Vaccine for all above 18 from May 1: Key highlights of govt's Phase 3 strategy

Also Read: Delhi under complete lockdown for six days, from tonight till April 26

COVID-19: Bombay Oxygen shares up 256%; it doesn't even make oxygen