Crypto Winter is here! Why are cryptocurrency investors fleeing?

The market credibility of cryptocurrencies is at stake even as investors become victim to plummeting market value.

The market credibility of cryptocurrencies is at stake even as investors become victim to plummeting market value.
Dipu Rai

The cryptocurrency markets are under pressure. On Wednesday, June 15, the market capitalization of cryptocurrencies dropped below $1 trillion, from above $3 trillion in November 2021. As cryptomarket volatility intensifies and investors continue to dump risky assets, the future of ostensibly decentralised currencies appears at best uncertain.

Why it is crucial?

The present crypto crisis differs from that of 2018. Back then, Bitcoin's value dropped by 80%. However, it recovered and reached new heights. This time, though, the market credibility of cryptocurrencies is in jeopardy. It is likewise not showing any indications of revival. Brian Armstrong, CEO of Coinbase, expects "another crypto winter." 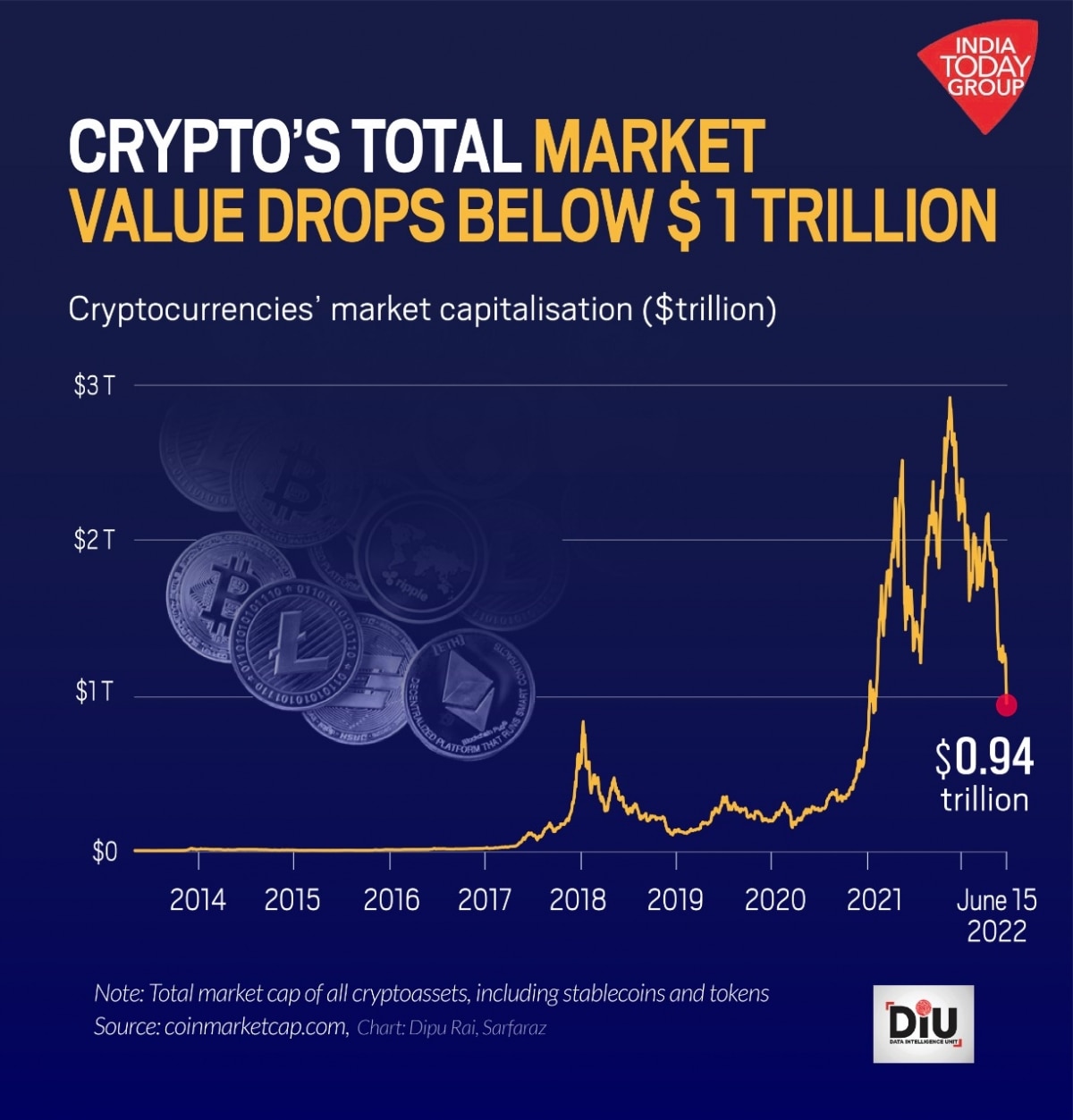 Why is crypto crashing?

The issue began two weeks ago when the stablecoin TerraUSD, Luna's sibling currency, lost its peg to the US dollar. Luna is algorithmically linked to TerraUSD. After the collapse of TerraUSD, Luna practically vanished. In just a few days, its worth plunged from $20 billion to nearly nothing. This resulted in a trail of investor victims.

The experimental bank Celsius's suspension of withdrawals was an additional major market shock. Customers have purchased Celsius's loan service, which was backed by their cryptocurrency deposits.

"The actual use case of cryptos has been dwarfed by the massive infrastructure of speculation built upon it. This is a natural correction going on now. As the use cases increase, cryptos will again be able to bear expanded speculation," Dr Sanjay Sharma, a cryptocurrency expert, told India Today.

In terms of value, cryptocurrencies are currently worth less than $1 trillion, or one-third of what they were worth seven months ago. Bitcoin, the largest digital currency in the world, fell to $21,105, its lowest level since the end of December 2020. As a bigger selloff ensued, several cryptocurrencies followed the same path.

Tuesday, Coinbase stated that the cryptocurrency exchange will eliminate approximately 1,100 positions, or 18% of its employees. In addition, organisations such as BlockFi and Crypto.com apparently eliminated hundreds of positions.

“Layoffs are starting to happen in pure-play crypto companies like Coinbase, Gemini and BlockFi, but larger institutional and investment groups like Fidelity are continuing to expand their crypto operations with a long-term view that will go on for years,” Dr Sharma further said. Ajeet Khurana, the founder of Reflexical, a cryptocurrency advisory service, noted that due to the limited scale of crypto markets, a small shift in liquidity has a significant impact on the price.

He said, “During the Covid-19 period, the increased liquidity caused the market to go up eight times, and now reduced liquidity has caused it to fall.”

But beyond market forces, India faces other challenges. Khurana told India Today that the country “suffers from the liquidity crunch too, but has the additional challenge of a negative regulatory overhand, as well as the imposition of TDS which drains trader's investable capital and reduces market depth. I see the market remaining subdued for a few more quarters, though there will be intermittent spikes.”