SII Chairman & Managing Director Cyrus Poonawalla said that the company will be offering a compensation of Rs 25 lakh to each of the families of the deceased, in addition to the mandated amount as per the norms 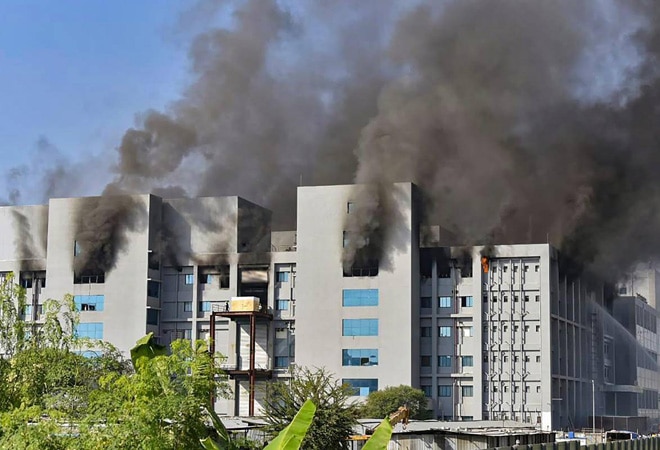 Serum Institute of India (SII) Chairman & Managing Director Cyrus Poonawalla on Thursday expressed sorrow on the loss of lives due to the fire that broke out at its under-construction facility in Pune. He said the company will be offering a compensation of Rs 25 lakh to each of the families of the deceased, in addition to the mandated amount as per the norms.

Rama Shankar Harijan, Bipin Saroj, Sushil Kumar Pandey, Mahendra Ingle, and Pratik Pashte were the five contractual labourers who lost their lives on the spot while doing electrical work when the fire broke out.

Harijan and Saroj were from Uttar Pradesh, Sushil Kumar belonged to Bihar, and both Ingle and Pashte were Pune residents.

"Today is an extremely sorrowful day for all of us at Serum Institute of India. Regrettably, there were losses of lives in the fire that broke out in our under-installation facility situated at the Special Economic Zone at Manjri," Poonawalla said in a statement.

"We are deeply saddened and offer our condolences to the families of the departed. In this regard, we will be offering compensation of INR 25 lakhs to each of the families, in addition to the mandated amount as per the norms. We would like to extend our gratitude to everyone for their concerns and prayers in these distressing times," he added.

Earlier in the day, at least five workers were killed in the fire that broke out at SII's plant at Manjri in Pune. The plant is spread over 100 acres of area in the city. Although a team of 55 firefighters sprang into action to doze off the fire, they could not save the life of the five aforementioned contractual workers.

Fire department chief Prashant Ranpise said smoke was very thick and they used 42-metre long ladder to rescue the people inside the building.

However, they could rescue only six people. While the five labourers could not find an exit, so got stranded in one corner of the building and passed away due to suffocation.

SII is manufacturing the Covishield vaccine for COVID-19, developed by the Oxford University and AstraZeneca. It is one of the two vaccines that have been granted emergency approval in India.

Earlier, SII CEO Adar Poonawalla, in a tweet, reassured all governments and public that there would be no loss of Covishield production due to multiple production buildings that had been kept in reserve to deal with such contingencies.

Later in another tweet, he said, "We have just received some distressing updates; upon further investigation, we have learnt that there has unfortunately been some loss of life at the incident. We are deeply saddened and offer our deepest condolences to the family members of the departed."