"I'll tell you exactly where to invest, and how to invest": Trump to India Inc

Talking to leading CEOs and promoters from Indian corporate sector at the US embassy here on Tuesday, Trump appreciated their investments in the United States and encouraged them to invest more 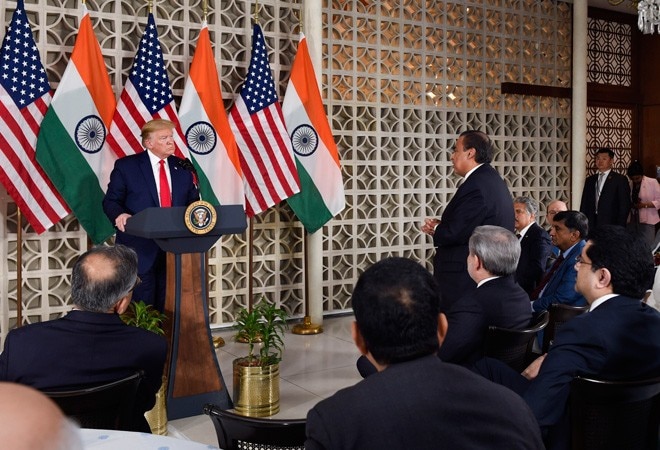 On the final day of his India visit, Unites States President Donald Trump held an interaction with the creme de la creme of India Inc ranging from sectors as diverse as steel and hospitality and automobiles, pharma and information technology. Talking to leading CEOs and promoters from Indian corporate sector at the US embassy here on Tuesday, Trump appreciated their investments in the United States and encouraged them to invest more.

"If you would like to ask some questions and find out how much you should invest in the United States of America, I'll tell you exactly where to invest, and how to invest. We just did a lot of business with India where they are buying $3 billion worth of helicopters," Trump said.

Opening the session, Tata Sons Chairman N Chandrasekaran, talked about initiatives undertaken by his companies to train people in the US, which was well received by the US President.

"You're up to 15 million people being trained by great companies. And I don't think government can teach jobs like that. Government is not equipped to do that. We could put all the money we want into government to do it and they are not just equipped to do it. So thank you very much," Trump said.

Responding to a remark by Chandrasekaran about tax and regulation cuts, Trump said: "I have a lot of people in your position, running the biggest companies in the world, say that tax cuts are very important, but regulation cuts may have been more important."

WATCH HERE:Trump interacts with Mukesh Ambani and other business leaders

Next up, Anand Mahindra, Chairman of Mahindra Group, shared details about investments made by his company to manufacture postal service delivery vans in the United States. Mahindra said that his company had made an investment of $1 billion and had shortlisted for producing over 100,000 postal delivery vans. Once the bid would be confirmed in August, the company would invest another $1 billion in the venture, Mahindra said. To this, Trump said "Good luck".

Hari Bhartia, Co-founder and Co-Chairman of Jubilant Bhartia Group, turned the conversation towards pharmaceuticals and healthcare, where he asked Trump his opinion about an Indian pharmaceutical company setting up manufacturing operations in the US.

"Healthcare is very important to Republican Party, I will tell you. We haven't been talking about it, we have been doing. We got rid of the individual mandate which was a disaster in Obamacare. We are now taking the shell of Obamacare and really running it well. But we would like to terminate it and put in great healthcare," Trump responded.

He added, "When you look at what Bernie Sanders and other want to do for the Democrats (regarding healthcare), it will never work because they'll never be able to do it. It's not gonna be good, even if did work, and it's totally unaffordable, which for you would be a big problem."

Reliance Industries Chairman Mukesh Ambani took the dais next to talk about his company's investments in the US energy sector and its achievements in the Indian telecom sector. Trump followed this remark with the question: "Are you going to do 5G too?"

Ambani responded in affirmative, adding that Reliance Jio, his telecom venture, is the only company without any affiliation with a Chinese company for 5G network. A smirking Trump remarked: "Oh good, put a bid in."

The Reliance Industries Chairman also pointed out that acquisitions in the US had become smoother in recent years, and Trump responded that it would be so "as long as I am here".

Next up was Kumar Mangalam Birla, Chairman of Aditya Birla Group, who went on to talk about two recent acquisitions by his company in the United States. Birla also talked about investments by the Aditya Birla Group in aluminium production.

Later talking to Lakshmi Mittal, Chairman of world's largest steelmaking company ArcelorMittal, Trump appreciated the "incredible job" his firm has done in the US steel industry. "Steel industry was dead in our country. There are a lot of industries you could do without, but steel you need from a military (point of view), and aluminium you need. The job you have done is incredible."

The US President also referred to a prospective facility by ArcelorMittal in Alabama.

Responding to a remark by Infosys CEO Salil Parekh, Trump said: "Now money can come in when your money's offshore. Before it was impossible, both bureaucratically and the rate was so high that nobody would pay it. Now we have billions and billions of dollars."

OYO Rooms CEO Ritesh Agarwal, who introduced the hospitality major as a young start-up, told Trump that OYO has opened 313 hotels in the US so far. To which Trump said, "I actually know of your company. Not such a small company, by the way. Good job."

Before opening the floor for question, President Trump talked about the ongoing menace of coronavirus. "I have talked to President Xi. It looks like they're getting it under control more and more. I think that's a problem that's going to go away but we lost almost a 1,000 points yesterday on the market. Things like that happen," he said.