Restricted mobility under coronavirus lockdown curtailed consumption and clamped demand that mercilessly pummelled the revenues of around 3,100 companies The damage is done and expectedly, they all saw it coming. The coronavirus-induced lockdown that stalled economic activity in the country has left corporates bleeding in the first quarter of fiscal year 2021. Close to 3,100 (ex-BFSI) firms have reported an estimated loss of Rs 6,911 crore in Q1 of FY21 against Rs 95,950 crore profit in Q1FY20, a drop of over 1 lakh crore.

While more than half of the sample slipped in red, nearly a fourth saw a disappointing turnaround in their earnings, from profits in the June quarter of FY20 to losses in the said quarter of FY21. Restricted mobility curtailed consumption and clamped demand that mercilessly pummelled the revenues of these companies. Total income saw a contraction of 38.2 per cent against a growth of 2.2 per cent in June quarter of FY20. The corporates were already grappling with a top line squeeze over the past three quarters and the outbreak of the pandemic only exacerbated the problems. Their aggregate revenues declined 5.7 per cent in September quarter of FY20, 4.3 per cent and 8.6 per cent, respectively in the next two successive quarters, year-on-year (y-o-y). 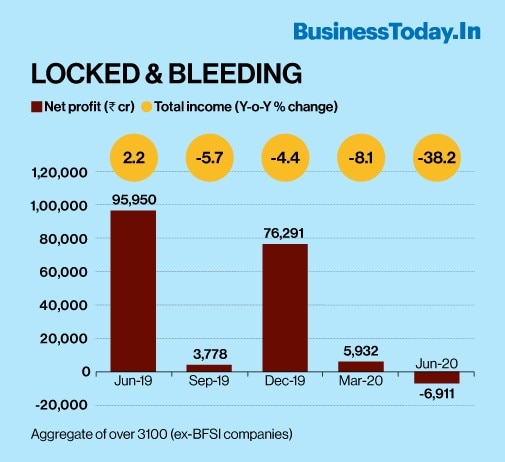 Among the industries, mining companies were the hardest hit with nearly 48 per cent and 88 per cent fall in their top-line and bottom-line numbers. The manufacturing companies' revenues plunged nearly 43 per cent and 67 per cent, y-o-y, during the quarter. Construction and real-estate sector too saw a total income decline of 43.5 per cent while non-financial services revenues were down 26 per cent.

The resilient financial sector, however, managed to report a 10 per cent expansion in its income and a 22 per cent growth in its profit after tax. This, in turn, helped restrict the plunge in the headline numbers of all companies taken together. Sample this: Sales of over 4,100 companies (including financial services) dipped 29.7 per cent and their earnings fell around 78 per cent in Q1FY21, although the severity of the impact can still be felt as over a third of the sample saw a fall of more than 50 per cent in their total income. Revenues of close to 18 per cent firms declined in 25-50 per cent range while 14.3 per cent managed a contraction below 25 per cent, on a yearly basis. The overall expenses of the lot declined approximately 26 per cent during the period. 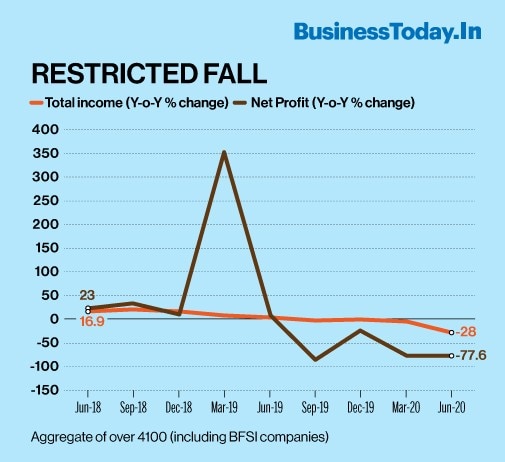 Gradually, some green shoots are visible with the subsequent easing of the restrictions but India Inc will have to wait to claw back their losses as the road to recovery will not be easy.

Lufthansa cancels all flights to India amid row with govt