India's top position can be attributed to the success of Mukesh Ambani's telecom venture Reliance Jio since its launch in September 2016; Jio offered low-cost data plans that forced all incumbent telco players to significantly cut rates 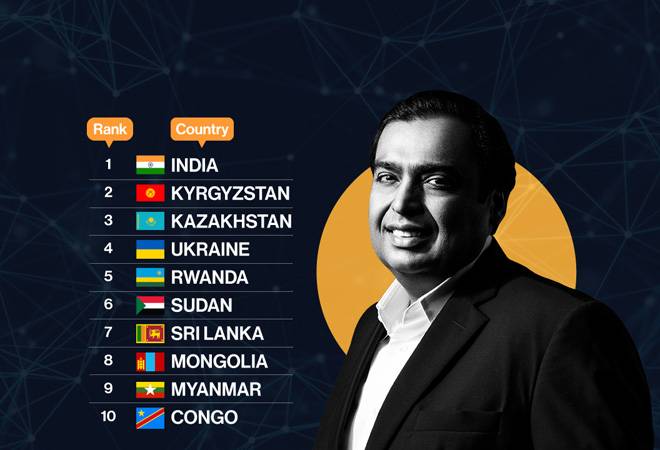 India is home to the cheapest mobile data plans in the world, with 1GB of data costing an average of just Rs 18.5 ($0.26). As per a cable.co.uk report on worldwide mobile data pricing, India ranks number one when it comes dirt-cheap data plans. Neighbouring countries like Sri Lanka ($ 0.78), Mongolia ($0.82) and Myanmar ($0.87) are also in the top 10.

Cable.co.uk, a company that compares best broadband, TV and phone deals, has ranked Zimbabwe as the most expensive place in the world to buy mobile data, where the average cost of 1GB is $75.20 -- 289 times as much as in India.

The survey was conducted after analysing as many as 6,313 mobile data plans in 230 countries to compare the cost of 1GB mobile data across the world. Developed countries like the US and UK have been ranked at 182 and 136, respectively, with 1GB of mobile data costing an average of $12.37 and $6.66, respectively. "Some (countries) have excellent mobile and fixed broadband infrastructure and so providers can offer large amounts of data, which brings down the price per gigabyte," Dan Howdle, Consumer Telecoms Analyst at Cable.co.uk said.

India's top position can be attributed to the success of Mukesh Ambani's telecom venture Reliance Jio since its launch in September 2016. Jio offered low-cost data plans that forced all incumbent telco players to significantly cut rates. In fact, Jio had offered free services for the first three months.

Thanks to the low tariffs, Jio reached a subscriber base of 100 million in just 170 days since its launch.

Three years after its launch, Reliance Jio is now the largest telecom player both in terms of revenue and market share. As per the latest TRAI data, Reliance Jio has the subscriber base of 36.9 crore. It's market share has also grown to 34.9 per cent in the second quarter of FY20. This is the highest when compared to other players. This also led to a consistent decline in the subscriber base of Vodafone Idea Ltd and Bharti Airtel.