'Warning for other brands': Tanishq's removal of Hindu-Muslim ad sets a bad precedent

The trolling of Tanishq ad on social media is a concerted effort, almost like a salutary warning for brands or any one for that matter to not speak up for religious harmony, says social media and brand commentator Santosh Desai 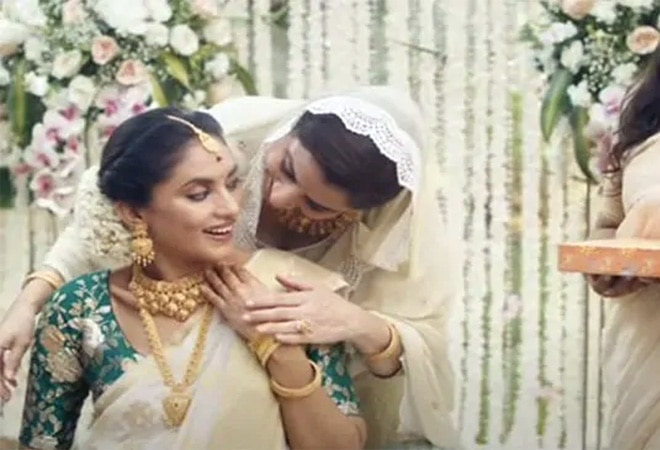 Tanishq, the jewellery brand of The Titan company, has been receiving much love and mostly hate on Twitter. Its ad to promote its festive collection Ekatvam has not gone down well with the Twitterati, so much so that the Tata Group brand had to pull down the ad eventually.

The ad shows the Hindu daughter-in-law being surprised by her Muslim mother-in-law with a baby shower as per Hindu traditions.  The description of the ad's story on YouTube is - "She is married into a family that loves her like their own child. Only for her, they go out of their way to celebrate an occasion that they usually don't. A beautiful confluence of two different religions, traditions and cultures."

A section of society has been labelling the ad for promoting #lovejihad while several others have slammed the 'haters' and appreciated the ad for its message of interfaith love and tolerance. Several leaders including Congress MP Shashi Tharoor, RPG Group's Chairman Harsh Goenka have supported the video.

Amid all the trolling with #BoycottTanishq trending on Twitter, the brand first disabled comments on the ad and then removed the ad from its brand's YouTube channel.

On the hatred the brand is receiving on social media, social media and brand commentator Santosh Desai says: "What is happening is obvious, any mention of religious amity and show of love between the two communities is a red flag as it is against the dominant narrative."

"It doesn't matter what the specifics of the ad are; anything that tries to spread goodwill and respect between different religions would have gotten the same reaction," he adds.

"This trolling of the Tanishq ad on social media is a concerted effort, almost like a salutary warning for brands or any one for that matter to not speak up for religious harmony," adds Desai.

Explaining the phenomenon, Siddharth Deshmukh, Senior Advisor and Adjunct Professor, MICA says that this phenomenon is explained best by Everett Rogers's theory of 'Diffusion of innovation". He says the market for each product is determined by its early adopters and innovators who then influence its value system.

"For Twitter, the early adopters are highly politicised. And, if a brand is launching any digital content, it has to appease this section of society for its product to be acceptable," says Deshmukh.  He adds, that if it was launched on television, the ad would have spoken directly to the majority and would have been accepted easily.

Indian media has been replete with movies and ads showing national integration and cross-faith interaction as a theme. Successful movies such as Veer Zaara is a case in point. But it is recently that the populist narrative has changed.

"We live in a world where brands and advertising bear the pathetic brunt of the anger of the times. The pressure cooker whistle becomes these poor ads," says Piyul Mukherjee, co-founder of a qualitative research agency Quipper.

She adds that Tanishq should have dug its heels in and stood by their idea instead of taking down the ad. "Such acts set a precedent and the world will now expect us to make the blandest and politically correct ads. Which is stupid and insipid. We should have the courage in our convictions," she says.

The brand's statement said that this film has stimulated divergent and severe reactions, contrary to its very objective. "We are deeply saddened with the inadvertent stirring of emotions and withdraw this film keeping in mind the hurt sentiments and well being of our employees, partners and store staff."

During the launch of the new collection last week, Ajoy Chawla, CEO, Jewellery Division, The Titan Company had said that the overall theme of the collection and the following marketing campaign is "about uniting people."

The ad series launched shows on similar themes.  "Through this collection we want to celebrate the one-ness of how people have come together to fight the pandemic," Arun Narayan, AVP Category, Marketing & Retail, Tanishq, Titan Company Limited had said explaining the inspiration behind the festive collection.

Anuj Kapoor, Professor of Marketing area at IIMA says that the ad focuses on achieving Ekatvam or harmony by depicting the actions taken by people from two different religions to achieve that. This relies on the broader assumption that Ekatvam is not fully there and therefore, an attempt is being made to achieve that (using Tanishq jewellery as an aid), he says.

"In my opinion, this is the source of all the backlash and misunderstanding." He suggests that the brand should have assumed that Ekatvam is already there and shown behaviour emerging out of this Ekatvam/unity. For example, showing the same protagonists (daughter-in-law/mother-in-law) talking about future actions (purchase of Ekatvam jewellery or even giving the jewellery to the anticipated newborn). "It's a subtle difference but an assumption would have changed the whole narrative," says Kapoor.