Ambani might be smarting on account of a held-up deal with Saudi Aramco and a legal tussle over acquisition of Future Retail, but he still holds two assets that can put him on top in this wealth race 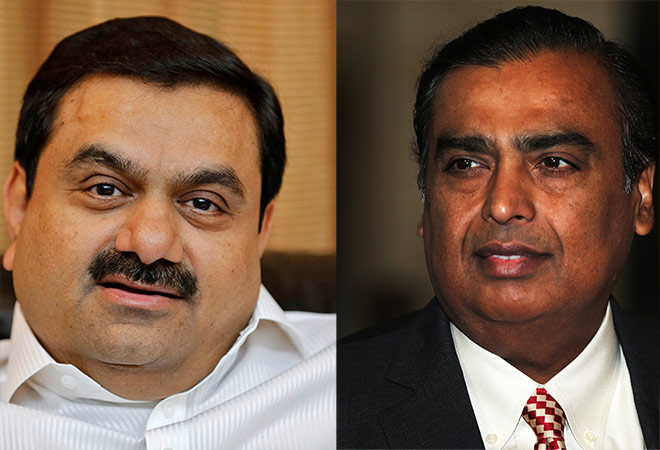 Adani has raised his wealth rapidly, but Ambani still has an ace up his sleeve

Mukesh Ambani, who is at the helm of India's most valuable company Reliance Industries, has held the position of the richest Indian for a long time. But, Gautam Adani has closed the gap rapidly with rising valuations of his companies listed on stock exchanges.

Adani pipped China's 'Lone Wolf' Zhong Shanshan on May 20 to rise to the 14th position on the Bloomberg Billionaires Index and become the second richest person in Asia. Right above him, on the 13th spot, is Ambani. The difference between fortunes of the two Indians stands at a mere $8.7 billion.

So, is Adani set to decidedly win this contest of riches against Ambani? The answer is a distinct no. Ambani might be smarting on account of a held-up deal with Saudi Aramco and a legal tussle over acquisition of Future Retail, but he still holds two assets that can widen the gap in his favour by a huge margin - Jio Platforms and Reliance Retail.

Both units of Reliance Industries signed fat stake sale deals - cumulatively, almost Rs 2 lakh crore - in the thick of pandemic last year. Following the flurry of investments, Jio Platforms holds a value of Rs 4.36 lakh crore (around $60 billion), whereas Reliance Retail is valued at Rs 4.6 lakh crore ($63.2 billion). Reliance Industries' next step, in near future, is expected to be a public issue to tap into this financial goldmine. Last year, Ambani had steadily scaled the ranks in the Bloomberg Billionaires Index as shares of Reliance Industries broke a series of records following several investments in the conglomerate's digital arm Jio Platforms and retail subsidiary Reliance Retail. The 64-year-old mogul managed to outdo the likes of Warren Buffet, Larry Page and Sergey Brin to occupy the fourth spot on the billionaires' ranking in August 2020. By the end of 2020, however, he dropped out of the top 10 as Reliance Industries' shares experienced extreme volatility.

The dip continued. Within the year to May 21, 2021, Ambani has lost $398 million, taking his net worth to $76.3 billion, as per the Bloomberg Billionaires Index.

Adani, on the other hand, added $33.8 billion to his net worth during the same period. His net worth is now $67.6 billion. So far this year, the Adani Enterprises Chairman has been a better wealth creator than most of the 13 billionaires above him on the Bloomberg list, including Jeff Bezos, Elon Musk, Bill Gates, Mark Zuckerberg, Warren Buffet, Larry Page and Sergey Brin. Only Bernard Arnault of Moet Hennessy Louis Vuitton has accrued more wealth than Adani so far in 2021.

ALSO READ: India Inc to the rescue! How Tata, RIL, Adani & others are helping fight Covid-19

The share market is helping Adani stack up more wealth. Adani Enterprises, the 58-year-old billionaire's flagship company, has seen its value rise almost 846.27 per cent over the past one year. Adani Total Gas, Adani Transmission and Adani Green Energy are other multibaggers, with returns at 1,044.51 per cent, 744.07 per cent and 467.89 per cent per cent, respectively, over the last one year. During this time, Adani Power and Adani Ports and Special Economic Zone have delivered returns to the tune of 206.21 per cent and 146.80 per cent, respectively.

Right now, Reliance Industries is effectively a net debt zero company - as of March 31, 2021, its cash and cash equivalents were higher than the outstanding debt. On top of that, it has two treasure troves of financial potential in Jio Platforms and Reliance Retail Ventures. Both units attracted massive investments from several top-tier investors last year.

Reliance Industries is planning to list its digital and retail businesses on the stock exchanges and unlock their financing potential. The other objective is to take them to the same level of success as its legacy oil and petrochemcials vertical. Adani started demerging and rearranging businesses in 2015, listing them on the market to unlock value.

If all goes well, Reliance Industries is expected to launch public issues for Jio Platforms and Reliance Retail in the next three to four years. While any expectations or targets for these IPOs are yet to be formed, they are certain to add to Mukesh Ambani's value by a great deal.

And the bigger asset out of the two (Jio Platform and Reliance Retail) for Ambani will be the telco, believes Anas Rahman Junaid, the founder of Hurun India, which comes out with the richest Indians list every year. Since the strategic investments by Facebook, Google, Qualcomm, Intel and others came less than a year ago, he says, their impact will be apparent with passage of time. Last year in October, Jio joined hands with Qualcomm to begin its journey towards a 5G rollout. The US-based chipmaker has also shown interest in Jio-Google's proposed affordable smartphone.

"A few years back, the rich list used to be dominated by leaders in energy segment. Now the top ranks are held by tech leaders, be it Jeff Bezos, Mark Zuckerberg, or Google duo of Larry Page and Sergey Brin. The tech business potential is huge. What Jio can achieve with strategic investments from Facebook and Google will be substantial. The story is yet to unfold," says Junaid.

To sum it up: Adani is inching closer to Ambani to become the richest Indian, but Ambani hasn't quite unlocked the value in Jio and Reliance Retail yet.

Black Fungus, White Fungus, Yellow Fungus: How are they different?