7,500 MT oxygen being produced daily, 6,600 MT allocated to states for medical use: Govt 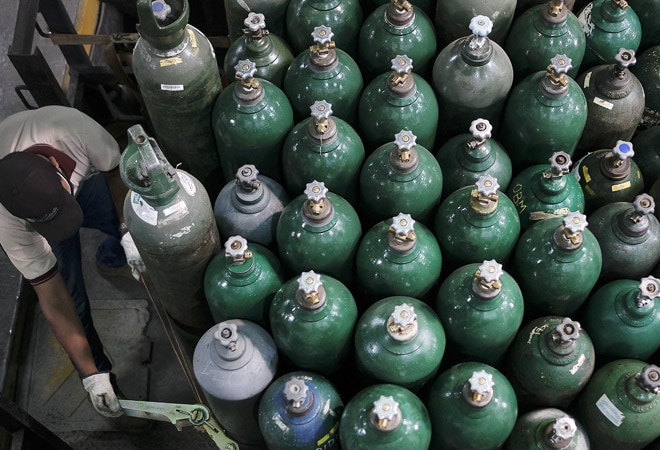 Amid reports of oxygen shortage in the country, the Centre on Wednesday said of the total 7,500 metric tonnes of oxygen being produced in India per day, 6,600 metric tonnes, as on date, is being allocated to states for medical use and assured that efforts are being made to increase its supplies in the coming days.

At a press conference, NITI Aayog member (Health) Dr V K Paul appealed to the states, hospitals and nursing homes to ensure rational use of oxygen as it was a "life-saving" drug for coronavirus infected patients.

Union Health Secretary Rajesh Bhushan said, "We are producing 7,500 metric tonnes of oxygen per day of which  6,600 metric tonnes is being allocated to the states for medical purposes.

"Presently, we have issued instructions that, leaving a few industries, the supply to industries will be restricted so that more and more oxygen can be made available for medical use," he said.

Bhushan further said that a 24x7 control room has been set up where state governments can raise the problems bring faced by them like if their truck is stuck somewhere or the if movement is being hindered.

"When you deal with such a huge challenge, such a big pandemic and multiple stakeholders , then at times there is panic and confusion, and the onus and responsibility is on the Union and state governments to work together and respond promptly so these challenges are addressed," Bhushan said.

The officials said they are also evaluating applications from suppliers abroad for import of oxygen.

In view of the increasing demand for medical oxygen, the Centre floated a tender for import of 50,000 MT of medical oxygen and a pre-bidding meeting was held on Tuesday, according to official sources.

The Health Ministry has been directed to finalise the tender for the same and also explore possible sources for import identified by the missions of MEA.

Besides, the Health Ministry on Sunday said that 162 Pressure Swing Adsorption (PSA) plants sanctioned by Government of India for installation in public health facilities in all states will augment oxygen capacity by 154.19 MT.

In addition to the 162 plants already sanctioned, states have requested for more than 100 such additional plants which are also being sanctioned, the ministry had said in a tweet.

"The entire cost of 162 PSA oxygen plants amounting to Rs 201.58 crore has been borne by the central government.This also includes 7 year maintenance cost to start from 4th year onwards after three years of warranty," the ministry had said in a series of tweets.

Pressure Swing Adsorption (PSA) plants manufacture oxygen and help hospitals become self-sufficient in their requirement for medical oxygen while also reducing the burden on the national grid for supply of medical oxygen.

The Centre on Sunday banned the supply of oxygen for industrial purposes except in nine specified industries in view of shortage of the essential public health commodity in several states amid a spike in COVID-19 infections.

The decision will come into effect from April 22.