Speaking at the Aaj Tak National Security Summit, Jaitley said government has increased the tax base during the last five years and money raised from taxes will be used for defence. 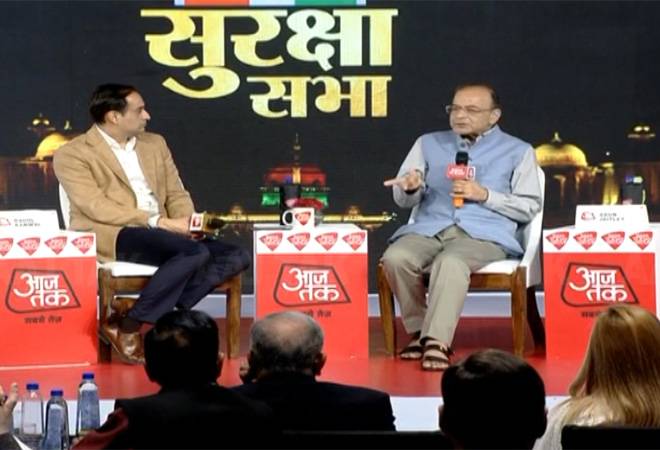 Finance Minister Arun Jaitley said on Tuesday that India needs a bigger defence budget to modernise its armed forces during the next six-seven years. Speaking at the Aaj Tak National Security Summit, Jaitley said government has increased the tax base during the last five years and the money raised from taxes will be used for defence.

Commenting on the use of MIG 21s in the Indian Air Force fleet, Jaitley said, "We don't have outdated jets in IAF fleet. MIG 21s used in the recent IAF operation were upgraded ones."

Talking about the demand for proofs in Balakot air strikes, the FM said 'Netas' should not drag armed forces into politics.

"Do the people who are demanding proofs of the IAF airstrike expect IAF to count dead bodies after the operations?" Jaitley asked.

Mentioning the fake news campaigns run by some people in India post the Balakot airstrikes, Jaitley said no one is willing to listen what 'compulsive contrarians' are saying in India.

"India must speak in one voice as fake campaigns are a problem in the country," the FM said.

"Pakistan's denial of the airstrikes reveals a lot. The Pakistan government is run by the ISI and army.

"If Pakistan would have would have admitted to casualties in airstrikes, then they would had to reply to the international community," Jaitley said.

The United Nations Security Council and Financial Action Task Force would have imposed sanctions on Pakistan after their admissions of casualties in the Balakot airstrikes, the FM said.

Pointing to the diplomatic win of the Modi government in face off with Pakistan, Jatiley said that for the 13th time, Pakistan has gone to IMF to seek monetary help. After the Balakot air strike, even China and Turkey have not fully backed Pakistan.

Organisation of Islamic Cooperation too ignored Pakistan recently, thereby indicating a huge diplomatic cost for the country to remain engaged in terrorism activities in the future.