Following the tense commotion at the Nandigram polling station between TMC and BJP supporters, West Bengal Chief Minister Mamata Banerjee dialled up state Governor Jagdeep Dhankhar to complain about the alleged booth capture in the constituency 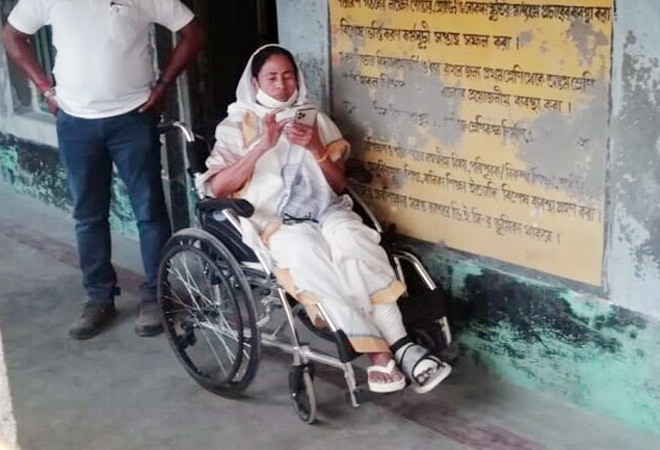 Bengal Chief Minister Mamata Banerjee led a major showdown in Nandigram on Thursday, April 1, where she seated herself outside a voting station.

The TMC (Trinamool Congress) levelled accusations against the central forces of halting voters from casting their ballots in the high-stakes battle against CM Banerjee's protege-turned archrival Suvendu Adhikari.

The polling for the second phase of West Bengal assembly elections began at 7 am on Thursday and since then the TMC has raised several complaints, blaming the BJP and central forces of stopping TMC polling agents and electorates from entering the voting booths.

What transpired in Nandigram?

Nandigram is the high-profile constituency in the state where CM Banerjee is pitted against her protege-turned-adversary, Suvendu Adhikari of the BJP.

Tensions grew in the constituency as it went to vote in the second phase of the West Bengal Assembly election 2021 on Thursday. Sporadic incidents of violence and allegations of booth jamming marred the voting process. TMC accused BJP and the central forces of stopping voters.

After monitoring the situation in the assembly segment, where local TMC leaders complained that their election agents were not being allowed to enter booths, Banerjee left her rented residence at Reyapara around 1 pm. She then visited polling centres in Sonachura, Reyapara, Balarampur, Boyal, Nandigram block 1 and 2.

She rode her wheelchair to the voting station at Boyal Primary School and seated herself outside the booth. Speaking to reporters, Banerjee alleged that the central forces were not permitting voters to exercise their voting rights at the booth.

She also stated that "outsiders are doing Hungama here" alleging that they have been brought "especially for this purpose." Four CRPF (Central Reserve Police Force) were stationed inside the polling station.

As Banerjee resolutely held to her ground at the Nandigram voting booth, BJP and TMC supporters assembled in large numbers on both sides of a ground near the school and started hollering slogans against each other.

Meanwhile, local cops and the Rapid Action Force (RAF) were seen attempting to mollify the edgy crowd on the ground as the atmosphere heated up.

Following the tense commotion at the Nandigram polling station, CM Banerjee dialled up Bengal Governor Jagdeep Dhankhar to complain about the alleged booth capture in the constituency.

"They didn't allow the locals to cast their vote. Since morning I have been complaining. Now I am appealing to you, please see this," she told Dhankhar.

Following this exchange, the governor put out a tweet saying, "Issues flagged by Mamata Banerjee a while ago on phone have been imparted to the concerned. There is full assurance of the concerned to adherence to rule of law. Am confident all will act in right spirit and earnestness so that democracy flourishes."