The Trinamool Congress (TMC) chief has sustained "severe bone injuries" on her left foot and ankle as well as bruises and injuries on her shoulder, forearm and neck 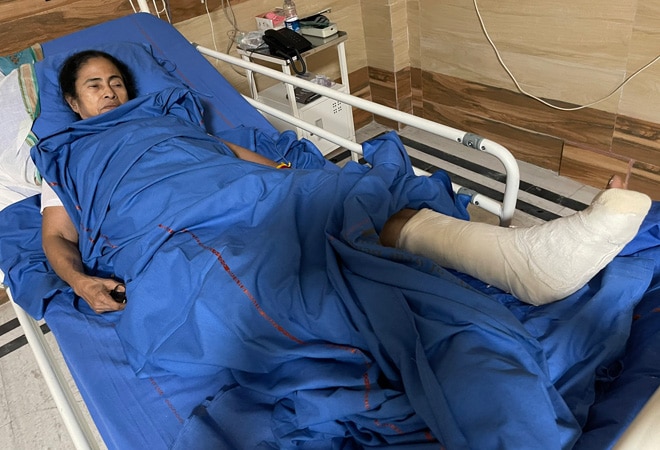 West Bengal Chief Minister Mamata Banerjee has been admitted to SSKM Hospital, Kolkata, after she was injured during her two-day visit to Nandigram. Banerjee was in Nandigram to campaign for the upcoming West Bengal Assembly elections and file her nomination from the constituency.

The Trinamool Congress (TMC) chief has sustained "severe bone injuries" on her left foot and ankle as well as bruises and injuries on her shoulder, forearm and neck.

"Initial examination suggests severe bone injuries in her left ankle and foot along with bruises and injuries in the right shoulder, forearm and neck. The Chief Minister complained of chest pain and breathlessness. She is kept under close watch for 48 hours," Dr M Bandopadhya of SSKM hospital told news agency ANI.

The TMC chief will undergo a CT scan on Thursday. She also developed a slight fever and has been shifted to a special ward at the 12.5 special cabin of SSKM hospital's VVIP Woodburn Block after the MRI at the Bangur Institute of Neurosciences.

The West Bengal government has constituted a team comprising 5 senior doctors - a cardiologist, an endocrinologist, a general surgery doctor, an orthopedist, and a medicine doctor to treat Banerjee.

Mamata Banerjee said when the incident took place, she was standing near her car and praying on seeing a temple. She alleged this is when few people came near her car and pushed the door. The door hit her left leg and caused swelling.

"No police official was present. Four-five people intentionally manhandled me in the presence of the public. There were no police officials for four to five hours in such a huge public gathering, not even the SP. It was definitely a conspiracy," Banerjee added.

Mamata Banerjee's nephew and TMC MP Abhishek Banerjee shared a picture of Mamata Banerjee from the hospital and tweeted, "@BJP4Bengal brace yourselves to see the power of people of Bengal on Sunday, May 2nd. Get Ready!!"

.@BJP4Bengal Brace yourselves to see the power of people of BENGAL on Sunday, May 2nd.

Minister Partha Chaterjee told the media, "Cowards have been trying to stop Mamata Banerjee but no one has been able to. Firstly, state ADG Law and Order was removed then DG and now with this... I'm surprised to see how the EC, who made all the changes, is silent. They must take responsibility."

The Leader of Opposition in Tamil Nadu Assembly tweeted, "The shameful attack on Mamata Banerjee is an assault on Indian democracy. The perpetrators of such a crime should be brought to justice immediately. ECI and the police department should take stringent action to avoid such instances in the future. I wish Mamata ji a speedy recovery!"