One of the most popular tax saving product Public Provident Fund, which not only gives tax benefit on investment but also provides tax exempted maturity amount, will again touch the 8% pa against 7.6% pa that it fetched before this hike. This has become possible after the government decided to raise the interest rate on small saving schemes from quarter beginning October 1, 2018.

However, a hike in the current quarter looked imminent because the 10 year bond yield touched the 8% level in the beginning of this month on September 3. So, it was being anticipated that the rates may be revised upwards.

The second highest interest rate is now being paid for Sukanya Samriddhi Account Scheme, which is meant for saving by parents for their girl child. This scheme will now earn an interest rate of 8.5% pa as against the existing interest rate of 8.1% pa. The saving under this scheme is eligible for tax deduction under Section 80C of income tax Act. 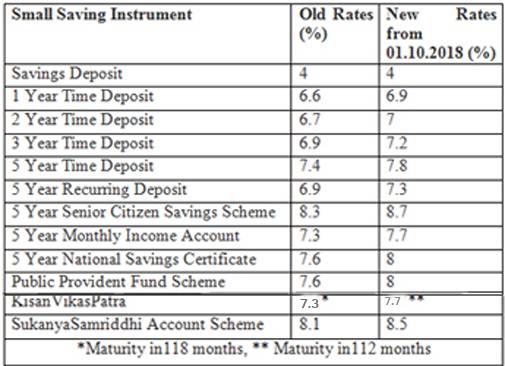 India to pay Iran in rupees for oil imports from November