Madan Krishnan, Vice President, and MD, Indian Subcontinent, India Medtronic, said human capital is the asset adding to it, adoption of technology in a better way to achieve a goal of $5 trillion economy 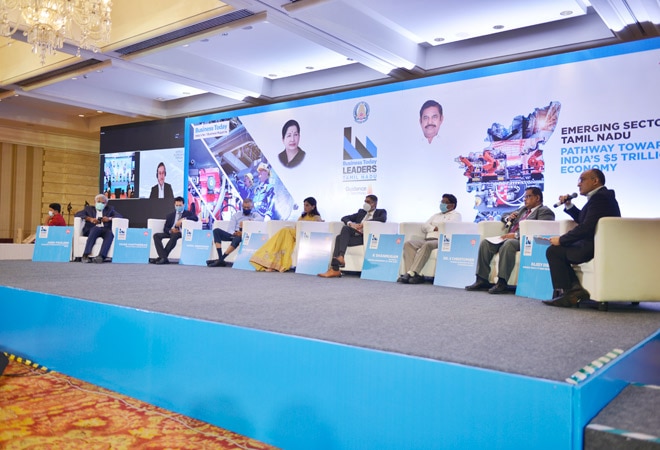 The thriving automotive industry, flourishing digital economy, and the vast scope in academics are some of the X-factors of Tamil Nadu that can play a significant role in India becoming a $5 trillion economy, said experts at the Business Today event 'Business Leaders of Tamil Nadu'.

Josh Foulger, Country Head & MD, Foxconn International Holding, India said, "Tamil Nadu's automotive industry is a crucial factor that can help India in becoming a $5 trillion economy in the coming years. The combination of electronics which is globally $2.7 trillion and automotive, which is already $3 trillion, gives great opportunity". Tamil Nadu is well-positioned given the depth the state has, Foulger added.

In a comparison with the Taiwan electronics market with India, Foulger noted that Taiwan has maintained consistency and has given a comfortable environment to investors. He praised India for its approach towards electronics and building semiconductors but added that India needs to learn how to execute the investment in the right way.

According to Gopal Srinivasan, Chairman & MD, TVS Capital Funds, digital economy is a 'trillion-dollar piece' before India achieves its goal of a $5 trillion economy.  He added that "Tamil Nadu has got the great advantage in focussing on the digital economy with its vast education system, long history in IT service, and iconic academic connection which is symbolised by the research park in IIT-Madras."

Further, he also suggested three areas where the state must experiment in boosting the digital economy: one is opening up private universities, second, to replicate Taiwan' Hsinchu Science Park that connects academic university, a manufacturing park along with digital, IT service park, and third being easy on social infrastructure.

Francisco Betti, Head of Shaping the Future of Advanced Manufacturing and Production, WEF, who joined virtually from Geneva, stated the role of innovation and the public-private dialogue are the two important segments that can help in improving the economy.

Dr Preetha Reddy, Vice Chairperson, Apollo Hospitals, said while the country has a goal to achieve a $5 trillion economy, Tamil Nadu has $1 trillion or more than that. "Manufacturing has huge potential, digital space is growing, and India is playing a huge role in that. Apart from manufacturing, skilling is another major factor," she added.

Madan Krishnan, Vice President, and MD, Indian Subcontinent, India Medtronic, said human capital is the asset adding to it, adoption of technology in a better way to achieve a goal of $5 trillion economy.

On the production of pharma products in Tamil Nadu, Vivek Partheeban, COO, Caplin Point Laboratories Ltd, said that "Most of the talent in the state is in R&D and Manufacturing and such people have moved to other states or overseas. So, if we bring them back it can boost pharma industry in the state thus, can be a major booster for both Tamil Nadu and India".

Dr S Christopher, Professor IITM, Former Secretary DD, R &D Chairman, DRDO, spoke on how focusing on building parts for aerospace and military can help India in accomplishing its $5 trillion economy goal. Besides, thrust on semiconductors is another area where Tamil Nadu can play a crucial role.

Talking about Tamil Nadu's role in the defence sector, Christopher pointed out that the state has got a unique privilege to have defence industry corridor. Explaining the different approaches, Christopher stated in the long-term the state should have government organisations like Karnataka and Telangana have 10-12 DRDO laboratories but Tamil Nadu doesn't have much.  Besides, interacting with the government about parts and tools used in defence should also be done to strengthen the defence sector.