Jaitley said the govt was at an advanced stage in considering the requirement of furnishing PAN card details for cash transactions beyond a limit. 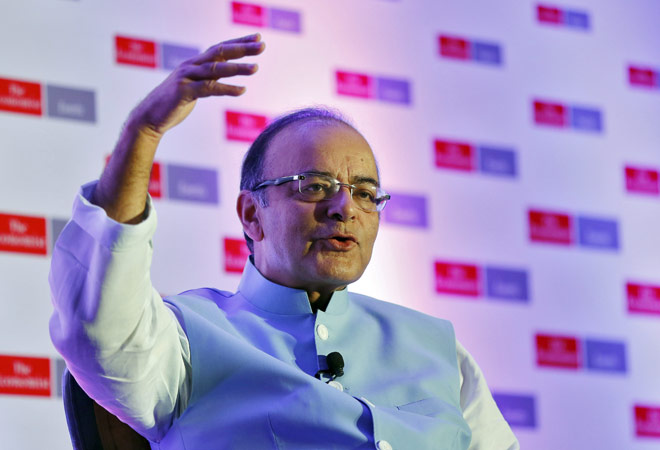 Finance Minister Arun Jaitley has said that bulk of black money was still within the country and called for a change in the attitude of people so that plastic currency becomes the norm and transactions in cash an exception.

In an article 'The NDA government's campaign against black money' posted on his Facebook page on Sunday, Jaitley said the government was at an advanced stage in considering the requirement of furnishing PAN (permanent account number) card details for cash transactions beyond a limit.

He said the NDA government's strategy was to put more money in the pockets of middle and low income groups by raising exemption limits and incentivising savings which will encourage consumption and which, in turn, will increase volumes of indirect taxation.

The Bharatiya Janata Party leader said opening a large number of payment gateways, internet banking, payment banks and the emerging reality of e-commerce will prompt the use of banking transactions and plastic money significantly.

"The bulk of black money is still within India. We thus need a change in national attitude where plastic currency becomes the norm and cash an exception. Being seized of this problem, the government has been working with various authorities to incentivise this change," Jaitley said.

He said those who had declared their undisclosed assets abroad in the compliance window offered by the government "can now sleep well" and those who have failed to file such a declaration will be subjected to penal provisions.

"They will be liable to pay 30 per cent tax and a penalty of 90 percent, thus leading to confiscation of the assets plus more. This law will create a deterrent in future against the flight of capital from India," he said.

He said the government has taken a series of steps for international cooperation in the matters of tax evasion.

Referring to Prime Minister Narendra Modi's initiative at the G-20 meeting for international cooperation in tackling unlawful assets held by the residents of one country in foreign soil, Jaitley said it was intended to lift the veil of secrecy in banking transactions and in real time inform domestic taxation authorities about transactions of their citizens internationally.

He said the government has signed an understanding with the US under FATCA (Foreign Account Tax Compliance Act) wherein the US and India would disclose to each other any real time transaction in accounts with financial institutions by its citizens in foreign territories.

He said Switzerland had agreed to provide India proof relating to several HSBC accounts where India can give some evidence over and above the stolen data which was delivered to New Delhi through France.

"It is expected that over the next two years this international cooperation will be worked out. Thus those with illegal assets abroad, who have failed to make declarations, would now stand the risk of information relating to them eventually reaching the Indian taxation authorities," Jaitley said.

The minister said that 638 people have declared their income amounting to Rs.3,770 crore under the 90-day compliance window offered by government to those wanting to disclose their unlawful assets abroad under the new law.

Jaitley said the government had also accelerated income tax assessments against people holding illegal money in Lichtenstein and in the HSBC bank at Geneva. Criminal prosecutions have been launched in cases where illegalities have been found.

He said a total peak balance of about Rs.6,500 crore has been assessed in these accounts.

"The assessed income of Rs.6,500 crore in HSBC and Rs.3,770 crore declared income during the compliance window should not be treated as income under any immunity scheme.

Pending tax issues will be referred to Shah panel: CEA

Modi, Merkel meet to give fillip to bilateral ties