CAA & NRC: The two together pose a serious threat to India's development story In May 2018, economist Kaushik Basu cautioned Bangladesh about "the risks posed by fundamentalism" to its growth story by saying that "vibrant economies have been derailed by zealotry many times throughout history".

This was before Bangladesh surpassing India in GDP growth became public knowledge. He was explaining why 'Why Bangladesh is Booming' in a Brookings Institution publication. He did foresee then that Bangladesh would soon surpass India's growth rate.

He gave three historical evidence to drive his point home: (a) "that golden era" of great economic dynamism in the Arab world and cities like Damascus and Baghdad "ended when religious fundamentalism took root and began to spread" a thousand years ago (b) Portugal's "heyday of global power" in the 15th and 16th century "passed quickly when Christian fanaticism became the empire's driving political force" and (c) in more recent times, Pakistan's economy performed moderately well with per capita income well above India's but slipped below it by 2005 because "military rule, restrictions on individual freedom and Islamic fundamentalist groups" erected walls against openness.

Basu also warned India against growing religious fundamentalism in that op-ed (in May 2018). "India is a vibrant, secular democracy that was growing at a remarkable annual rate of over 8% until a few years ago. Today, Hindu fundamentalist groups that discriminate against minorities and women, and that are working to thwart scientific research and higher education, are threatening its gains."

Threat of CAA and NRC to derail India's economy

Until then, India knew only about the Citizenship (Amendment Bill) of 2016 (CAB) and Assam's National Register of Citizens (NRC). The CAB has now become the Citizens (Amendment) Act of 2019 (CAA) and a nation-wide NRC has been proposed by the Union Home Minister Amit Shah.

The CAA has sparked a country-wide protest, led by students in more than 20 campuses and internet connections have been shut down in many parts of the Northeast, Uttar Pradesh and West Bengal for weeks. More than 10 people have committed suicide in West Bengal alone as the NRC spread and migrant workers are rushing home to collect their documents.

The CAA provides for citizenship on the basis of religion but specifically excludes Muslims from it.

Expressing his concern and registering protest against this law, Nobel laureate and scientist Venkatraman Ramakrishnan said recently that "India is taking a wrong turn" and cautioned: "Young people in India are very enterprising, working under difficult circumstances trying to do something, and what we don't want is to be distracted from that mission of nation-building by creating divisions within the country."

A far bigger threat emerges from the proposed nation-wide NRC - which would require every in Indian to prove his/her citizenship, failing which they would be declared "illegal migrants" and put in detention centres. With the CAA already in place, the two (CAA and NRC) together would mean that only the Muslims would be filtered out.

Though the Union Home Minister Amit Shah has sought to separate the two following the mounting protests, he did make the link between the CAA and NRC clear more than once from public platforms. For example, at a rally in Kolkata in October this year, he said: "Before bringing NRC in the country, CAB will be passed in Rajya Sabha by BJP-led government at the Centre. We will give citizenship rights to all the refugees, including Matuas (a Hindu sect), who have been thrown out from different countries. Refugees from other countries - Hindu, Buddhist, Sikh, Jain Christian - will never be forced to leave the country."

Only the Muslims were missing from his list of beneficiaries.

Not just Basu, others have also found a definitive link between the growth of religious fundamentalism and economic development.

In July 2018, researchers from the Universities of Bristol (UK) and Tennessee (US) published a study, 'Religious change preceded economic change in the 20th century', clearly establishing the causal relationship between secularism and economic growth. It found that the secularisation graph "leads" the economic development graph in 109 countries it studied, including the UK, Nigeria, Chile and Philippines. 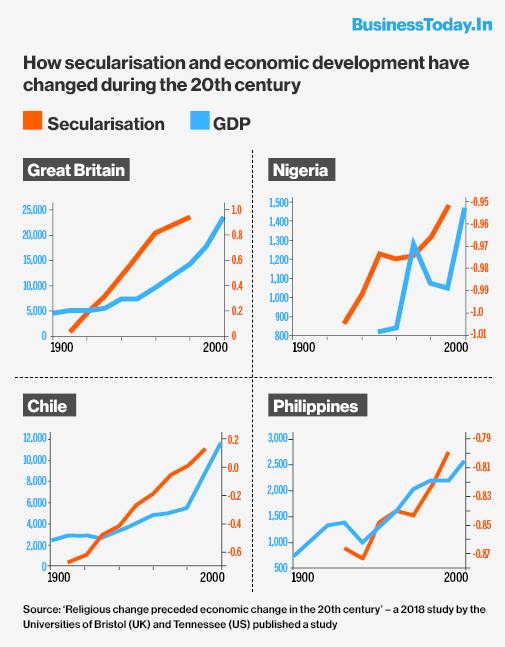 The study used data from birth cohorts from the World Values Survey to get a measure of the importance of religion spanning the entire 20th century (100 years of 1900-2000) and economic data for those 100 years for 109 countries. It also brought together evidence from anthropology, political science and neuroscience.

The lead researcher wrote: "The message is crystal clear: secularisation occurs before economic development and not after it".

The language of this sentence is interesting, for it points to the starting point of the study: "We have known for decades that the secular countries tend to be richer than religious ones" but wanted to find the answer to a more straight forward question: "Was it the secular chicken that came first or the economic egg?"

Respect for individual rights is key

The study also looked deeper to find answer for an apparent dichotomy: Why some rich countries are religious and some poor ones secular. It mentions the US and Catholic countries in Europe which are prosperous yet religion remains important there, while former communist countries of Eastern Europe, which are some of the most secular, have middling economic performance.

The answer, it says is, "it's the respect for individual rights that separates the rich from the poor".

It goes on to add that "secular countries only become prosperous once they have evolved a greater respect for these individual rights (tolerance of homosexuality, abortion and divorce)" and that "it's easy to see why individual rights flower once religious influence has withered".

High cost of a nation-wide NRC

How many are likely to be declared illegal migrants?

The answer would await completion of the NRC exercise but a back of the envelope calculations can be made on the basis of the Assam experience. In Assam, 19,06,657 people, out of a total of 3,30,27,661, found themselves excluded from the NRC list - a failure rate of 6%.

Since India's total population projection for 2019 is 133.3 crore - as per the 'Population Projections for India and States' from the National Commission on Population - a 6% exclusion would mean a total of 7.99 crore people (79.9 million) likely to fail the test and risk being declared illegal migrants.

This figure can't be dismissed lightly as in Assam it was not just about foreigners. Even the family members of former President of India Fakhruddin Ali Ahmed (1974-77) failed the NRC test twice and Mohammed Sana Ullah, a Kargil war veteran who served in the Indian Army for 30 years winning a President's medal in 2014 and was serving as a deputy inspector in the border wing of the Assam Police when he was jailed in May this year, after a foreigners' tribunal declared him a foreigner.

Of course, a fair number of the excluded were Hindus, many were migrants from Bihar. That is why the Assam government rejected the NRC and demanded a fresh one.

Millions to land in detention centres

For those who fail the NRC test, and declared as illegal migrants, detention centres are being readied for them. Several such "detention centres" are already being built across the country - 10 in Assam, one in Navi Mumbai and one in Bangalore rural (Nelamangala).

Besides, in July this year, the central government asked all states and union territories to set up at least one detention centre each to house illegal migrants.

Such a big number of detainees would need hundreds of detention centres, which would have to be built and manned. They would have to be fed too. But before that they may have a 120-day window (as in Assam) to approach foreigners' tribunals, failing which the High Courts and the Supreme Court - all of which would have a huge cost and keep millions away from productive economic activities.

Here are a few such costs:

2. Cost of building and running a total of 12,583 foreigners' tribunals for trying those 7.99 crore people - by taking Assam as a benchmark where 200 foreigners' tribunals are being added to the existing 100, with 1,600 staffers and 400 home guards to handle 19.06 lakh excluded from the NRC.

3. Private cost of fighting cases in foreigners' tribunals alone would cost about Rs 3.99 lakh crore - by taking a benchmark of Rs 50,000 for one towards lawyer's fees, administrative and other costs as provided by a Guwahati High Court advocate. Approaching High Court or Supreme Court would be progressively and drastically higher.

There would be other economic, social and human costs also the magnitude of which is difficult to foresee or calculate.

India would be wiser to take a pause and think of the potential of the CAA-NRC combine to damage its development story.