For anyone, therefore, to say that the process of NPR or NRIC/NRC has not been announced or begun is not true. It has begun.

Now that protests against the Citizenship (Amendment) Act of 2019 (CAA) has spread far and wide and prohibitory orders (Section 144) and internet shutdowns have become the order of the day, a lot of confusion has spread over the meaning and implication of this law and its links with Population Register (PR), National Population Register (NPR), National Register of Citizens (NRC) and National Register for Indian Citizens (NRIC).

Here is a reality check on the implications and links among these through what official gazette notifications, laws and rules provide for. It seeks to clear the fog of confusion before arriving at any conclusion.

Myth 1: Nation-wide NRC not announced. Reality Check: It has been notified in the official gazette

The process of preparing a nation-wide NRC has been kick-started with a gazette notification of July 31, 2019. The notification said:

"In pursuance of sub-rule (4) of rule 3 of the Citizenship (Registration of Citizens and Issue of National Identity Cards) Rules, 2003, the Central Government hereby decides to prepare and update the Population Register (PR) and the field work for house to house enumeration throughout the country except Assam for collection of information relating to all persons who are usually residing within the jurisdiction of local registrar shall be undertaken between the 1st day of April 2020 to 30th September, 2020."

Also Read: Indian-Americans protest against CAA, NRC in front of Indian Embassy in US 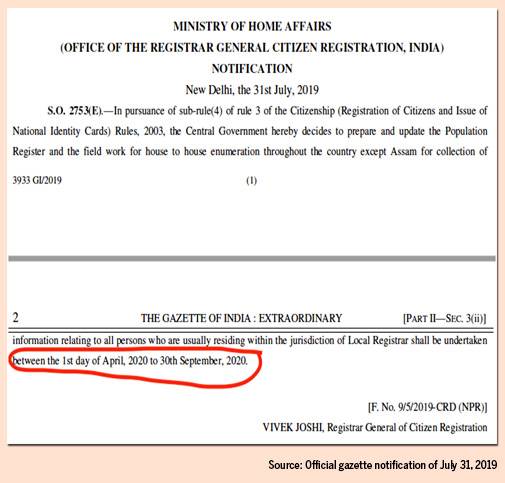 Rule 3 of the Citizenship (Registration of Citizens and Issue of National Identity Cards) Rules, 2003, (2003 Rules) mentioned in the gazette, is about the concept of "NRIC and its sub-rule (4) provides for "Preparation of the National Register of Indian Citizens".

This should remove doubts that a nation-wide NRC has not been announced.

Just that instead of being called NRC - which is specific to Assam and mandated by the Assam Accord of 1985 and the Supreme Court (SC) - it is called NRIC and exclude Assam to differentiate the two.

Myth 2: Population Register and NRIC not linked. Reality Check: They are linked

The "population register" the gazette notification mentions the first step towards preparing the NRIC. This is what the sub-rule (5) of Rule 3 of the 2003 Rules says: "The Local Register of Indian citizens shall contain details of persons after due verification made from the population register."

What are Population Register and NRIC?

The Citizenship (Registration of Citizens and Issue of National Identity Cards) Rules, 2003 defines Population Register as: "Population Register means the register containing details of persons usually residing in a village or rural area or town or ward or demarcated area (demarcated by the Registrar General of Citizen Registration) within a ward in a town or urban area".

How will Population Register get converted to NRIC?

Sub-rule (3) of Rule 4 says: For the purposes of preparation and inclusion in the local register of Indian citizens, the particulars collected of every family and individual in the Population Register shall be verified and scrutinised by the local registrar who may be assisted by one or more persons as specified by the Registrar General of Citizen Registration."

Process for identifying and verifying "Doubtful Citizenship" not provided yet

Sub-rule (4) of Rule 4 of the 2003 Rules makes it very clear what will happen during this verification and scrutiny process: "During the verification process, particulars of such individuals, whose citizenship is doubtful, shall be entered by the local registrar with appropriate remark in the population register for further enquiry and in case of doubtful citizenship, the individual or the family shall be informed in a specified pro-forma immediately after the verification process is over."

So, the process is clear: "doubtful citizens" would be marked out in the population register for further inquiry and then family members would be informed, "in a specified pro-forma".

The arbitrariness creeps in here because (a) It is not clear on what basis "doubtful citizens" would be identified or marked out and (b) the "specified Pro-forma" is not yet in public domain. Clearly, the process would be opaque until these are explained and published.

The purpose of the 2003 Rules is to provide for practical instructions and procedures to execute the NRIC project. Absence of specific process makes it clear that it would be vulnerable to arbitrariness, depending on the whims and fancies of local officials. This has now been challenged in the Kolkata High Court, along with the July 2019 gazette notification to carry out the NRIC.

The arbitrariness increases further as sub-rule (5) of Rule 4 says "doubtful citizens" would be heard by the sub-district or Taluk Registrar of citizen registration, before a final decision is taken to include or to exclude them in the NRIC, but does not specify which documents would be required for this or the process to be followed.

In contrast to this, in the case of Assam the entire process of seeking documents and verification - leading up to appealing before the foreigners' tribunal and beyond - were well defined and transparent.

The next in the NRIC process is: "The draft of the local register of Indian citizens shall be published by the sub-district or Taluk Registrar, for inviting any objections or for inclusion..." (sub-rule (6) (a) of Rule 4 of the 2003 Rules).

The census details like names of people, their address or other details are not published or used for any other process. Besides, the census is carried out under a different law - the Census Act of 1948.

Myth 4: PR/NPR & NRIC started by UPA. Reality Check: It began with 2003 amendment by the Vajpayee regime

When and how did the population Register and NRIC come into the Citizenship Act of 1955?

The NPR process was first rolled in during the UPA regime in 2010-11. Knowledgeable sources point out that it never progressed to the next stage - preparation of the NRIC - as the UPA regime got involved with the Aadhaar project (unique identity for Indians). Next, the NPR was updated in 2015 but, again, it did not progress to the NRIC.

Interestingly, there is no mention of a population register in the main law - the Citizenship Act of 1955 as it stands now, that is, even after the 2003 amendment.

It was brought in through the 2003 Rules.

Ranjit Sur of the West Bengal's civil rights organisation - Association for the Protection of Democratic Rights (APDR) - which brought to light how the NRIC was being sneaked in through the backdoor in the state in the garb of the census 2021 exercise - questions the legal force of such a country-wide exercise through only the 2003 Rules. He says he consulted many lawyers who too expressed doubts about it since there is no such provision in the main law.

It was following the APDR's expose that the West Bengal Chief Minister Mamata Banerjee suspended work on the National Population Register (or NPR).  The chief ministers of 10 other states, including those from Bihar, Odisha, Punjab, Telangana, Kerala and Delhi, have now joined in and declared their opposition to NPR and NRIC.

Myth 5: No link between NPR, NRC and CAA. Reality Check: They are all linked and would filter out Muslims

Even if one were to ignore the Union Home Minister Amit Shah's repeated public speeches linking the two before stepping back due to widespread protests across the country, a clear link is established through "illegal migrant" and NRIC brought in through the CAA of 2003. The CAA (of 2019) - passed recently - filters out the Muslims from granting citizenship to "illegal migrants".

There is more evidence now.

Business Today accessed documents - reproduced below with relevant parts encircled in red - circulated to district magistrates and additional district magistrates (DMs and ADMs) of states. These documents carry information to be sought from people during the preparation of "National Population Register-2020 (NPR-2020)".

Graphic 4: Deadly give away: NPR-2020 seeks to identify "illegal migrant" This is a deadly give away of the fact that the purpose of the NPR-2020 is to identify illegal migrants. Once this is done, all the Muslims would be filtered out through the CAA (of 2019) and put in detention centres being readied across the country.

In fact, 2 days before the gazette notification announcing the population register (nor NPR) was published (in July 31, 2019), a prominent national daily disclosed that the central government has asked all states and union territories to set up at least one detention centre each to house illegal migrants.

For those who failed the NRC test in Assam or would fail the NRIC test elsewhere in India, at least 12 detention centres are being readied across the country - 10 in Assam, one in Navi Mumbai and one in Bangalore rural (Nelamangala).

Seeking information about the place of birth of father and mother in the NPR-2020 shown above is not in the 2003 Rules.

For, the 2003 Rules seek 12 pieces of information: "It (population register) would contain 12 details: name, father's name, mother's name, sex, date of birth, place of birth, residential address (present and permanent), marital status (if ever married, name of the spouse), visible identification mark, date of registration of citizen, serial number of registration and national identity number provided under rule 13. (sub-rule 3 of Rule 3 of 2003 Rules).

On the other hand, the office of the registrar general and census commissioner, India, updated its website to give details about the NPR. It sought 15 sets of information, including "nationality", but not the "place of birth of father and mother".

Not just the gazette notification of July 31, 2019, the start of the NPR has been widely reported by the newspapers. A PTI report of October 11, 2019, said: "The RGI has already begun a pilot project in over 1,200 villages and 40 towns and cities through 5,218 enumeration blocks, where it is collecting various data from people. The final enumeration will begin in April 2020 and end in September 2020."

It further stated: "Training of national trainers is to start from October 14, 2019 and senior state officials have been informed about the schedule of the training."

As it has been witnessed in West Bengal, the training for DMs and ADMs were completed by December first week. They would now be the trainers of other officials who would carry out the exercise at the grassroots level and above.

For anyone, therefore, to say that the process of NPR or NRIC/NRC has not been announced or begun is not true. It has begun. The actual house-to-house enumeration would begin from April 2020.

The conclusions are clear: The process of preparing a nation-wide NRIC (minus Assam) has begun with the initiation of the NPR-2020. The CAA (2029) is already in place. Together, these would filter out the Muslims - and detention centres are being readied to house them.

'Not only will we win, we will form govt,' says BJP as it trails in Jharkhand Assembly Election 2019