"With this manoeuvre the required orbit for the Vikram Lander to commence it descent towards the surface of the Moon is achieved," says ISRO 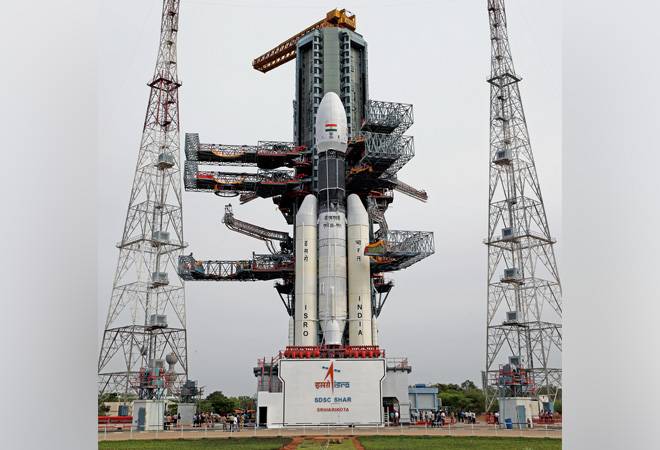 On Tuesday, the first de-orbiting manoeuvre for the spacecraft was carried out, a day after lander 'Vikram' was separated from the orbiter.

The second de-orbiting maneuver of Chandrayaan-2 spacecraft was successfully carried out early Wednesday, the Indian Space Research Organisation said, inching towards achieving a historic soft-landing on the lunar surface. "With this manoeuvre the required orbit for the Vikram Lander to commence it descent towards the surface of the Moon is achieved," ISRO said in a statement.

The nine-second de-orbiting or retro-orbiting manoeuvre was executed at 3.42 am using the onboard propulsion system, the space agency said. On Tuesday, the first de-orbiting manoeuvre for the spacecraft was carried out, a day after lander 'Vikram' was separated from the orbiter. While Chandrayaan-2 spacecraft continued to orbit the moon at a perigee of 96 km and apogee of 125 km, the Vikram Lander is at an orbit of 35 km perigee and 101 km apogee.

"Both the Orbiter and Lander are healthy," the space agency said. It further said that moon lander Vikram is scheduled for a powered-descent between 1 am and 2 am on September 7, followed by touch down of Lander between 1.30 am and 2.30 am. ISRO Chairman K Sivan has said the proposed soft-landing on the Moon is going to be a "terrifying" moment as the ISRO has not done it before, whereas Lunar Orbit Insertion (LOI) maneuver was successfully carried out during the Chandrayaan-1 mission.

Following the landing, the rover 'Pragyan' will roll out from 'Vikram' between 5:30-6:30 am on September 7, and carry out experiments on the lunar surface for a period of one lunar day, which is equal to 14 earth days. The mission life of the lander is also one lunar day, while the orbiter will continue its mission for a year. India's Geosynchronous Satellite Launch Vehicle, GSLV MkIII-M1 had successfully launched the 3,840-kg Chandrayaan-2 spacecraft into the earth's orbit on July 22.

Chandrayaan-2 satellite had began its journey towards the moon leaving the earth's orbit in the dark hours on August 14, after a crucial maneuver called Trans Lunar Insertion (TLI) that was carried out by ISRO to place the spacecraft on "Lunar Transfer Trajectory". In a major milestone for India's second Moon mission, the Chandrayaan-2 spacecraft had successfully entered the lunar orbit on August 20 by performing Lunar Orbit Insertion (LOI) maneuver.

The health of the spacecraft is being continuously monitored from the Mission Operations Complex (MOX) at ISRO Telemetry, Tracking and Command Network (ISTRAC) in Bengaluru with support from Indian Deep Space Network (IDSN) antennas at Bylalu, near Bengaluru, the space agency has said. The orbiter carries eight scientific payloads for mapping the lunar surface and study the exosphere (outer atmosphere) of the Moon while the lander carries three scientific payloads to conduct surface and subsurface science experiments.

The rover carries two payloads to enhance the understanding of the lunar surface. India's second lunar expedition would shed light on a completely unexplored section of the Moon, its South Polar region. According to ISRO, the mission objective of Chandrayaan-2 is to develop and demonstrate the key technologies for end-to-end lunar mission capability, including soft-landing and roving on the lunar surface.

On the science front, this mission aims to further expand the knowledge about the moon through a detailed study of its topography, mineralogy, surface chemical composition, thermo-physical characteristics and atmosphere, leading to a better understanding of the origin and evolution of the moon, the space agency had said. On successful completion, it will make India the fourth country after Russia, the US and China to pull off a soft landing on the moon.