The state pollution control boards were directed to monitor the water quality more frequently in consultations with the health departments. 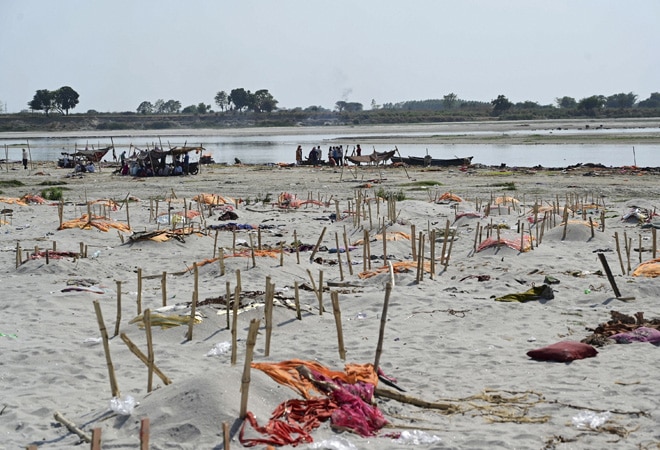 The Centre said dumping of dead bodies in the Ganga and its tributaries has recently been reported, which is "most undesirable and alarming".

The Centre directed Uttar Pradesh and Bihar on Sunday to prevent dumping of dead bodies in the Ganga and its tributaries, and focus on their safe disposal and a dignified cremation after corpses were seen floating in these rivers following a spurt in the number of coronavirus cases.

At a review meeting conducted on May 15-16, the Centre said dumping of dead bodies and partially burnt or decomposed corpses in the Ganga and its tributaries has recently been reported, which is "most undesirable and alarming".

"Namami Gange directs states to prevent dumping of dead bodies in the Ganga and focus on their safe disposal and providing support for ensuring dignified cremation," the Jal Shakti Ministry said.

The state pollution control boards were directed to monitor the water quality more frequently in consultations with the health departments.

The Central Pollution Control Board (CPCB) was assigned the task of overall monitoring, providing guidance to the state pollution control boards and taking up advanced analysis in the matter.

An advisory was issued by Rajiv Ranjan Mishra, Director General, National Mission for Clean Ganga, to the district magistrates, who are also the chairpersons of the district Ganga committees, on May 11.

This was followed up by a letter the next day to the chief secretaries to prevent the dumping of dead bodies in the river and ensure enforcement of the government guidelines on the cremation of COVID-19 victims.

The letter also advised the states to provide financial assistance as well as regulate the rates for the cremation or burial process.

On May 15, the steps taken in this regard in Uttar Pradesh and Bihar were reviewed at a meeting chaired Pankaj Kumar, Secretary, Ministry of Jal Shakti, and further action points were decided.

Highlighting the instructions already given, Kumar had called for expeditious action and underscored the need to give equal attention to such incidents in urban and rural areas along the Ganga and other rivers.

"Stopping of dumping of dead bodies as well as their safe disposal and protection of water quality have to be ensured on a war footing. After knowing the progress from the states, the CWC (Central Water Commission), the CPCB and the state pollution control boards would also be giving their feedback and action plans," he had said.

Mishra stated that the situation is being monitored and follow-up action is being taken in several districts such as Unnao, Kanpur rural, Ghazipur and Balia in Uttar Pradesh and Buxar and Saran in Bihar.

However, some cases have also been reported from other districts. He asked the state missions to keep an eye on the situation.

Mishra emphasised the need to strengthen enforcement, maintain vigil and take proactive action to facilitate and support the families for the cremation of the bodies and asked the state missions to specifically report on this.

"If needed, the project directors can assess and also give support to the district Ganga committees for this out of the NMCG funds available with them, while keeping the NMCG informed," he said.

Shrivastava said all the district magistrates have been alerted about the issue and patrolling is being carried out to prevent dumping of dead bodies in the Ganga.

He also informed that 13 crematoria under Namami Gange, in addition to the existing ones, have been made available for the cremation of dead bodies.

Anand Kishore, Principal Secretary, Urban Development and Project Director, State Ganga Mission, Government of Bihar, informed that it has been decided that the cremation or burial expenses of those dying due to COVID-19 will be borne by the state government.

He added that even if the deceased did not have a COVID-positive report but showed symptoms of the disease, the family will be offered this support.

He also said patrolling is being done to prevent further dumping of dead bodies in the river, especially in districts like Buxar and Saran (Chhapra).

CWC Chairman S K Halder informed that they are monitoring the flow and the water quality of the river through their stations and will further increase the frequency.

CPCB Member Secretary Prashant Gargava said the board has forewarned all water monitoring stations along the Ganga and her tributaries. The periodicity of testing the water quality has also been increased.

Debashree Mukherjee, Additional Secretary with the Jal Shakti Ministry, stated that besides an urgent assessment of the risks to the riverside communities by the pollution control boards, there is a need to raise awareness on the dos and don'ts as regards the use of river water and to prevent such incidents of dumping of bodies in the river.

AAP says it put up posters critical of PM Modi, alleges harassment of its workers by cops