The pre-emptive steps include equipping ships with disaster relief material, and the use of Dornier aircraft to warn fishing boats. According to an official statement, special community interaction programmes will also be organised in coastal areas of the state. 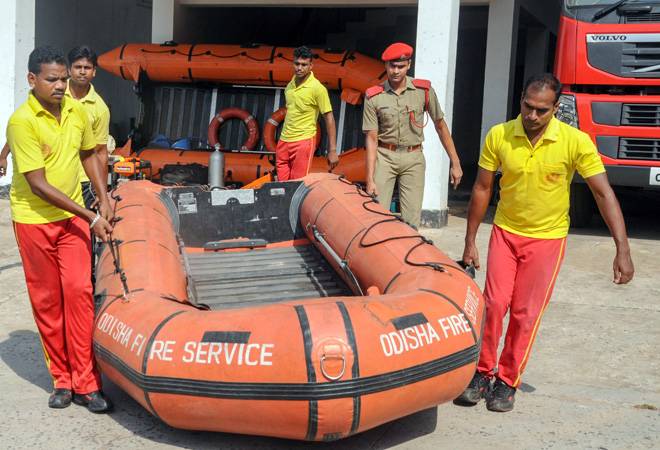 The Indian Coast Guard (ICG) has taken pre-emptive measures to deal with cyclonic storm 'Fani' as it will hit the coastal state's shores tomorrow. The pre-emptive steps include equipping ships with disaster relief material, and the use of Dornier aircraft to warn fishing boats. According to an official statement, special community interaction programmes will also be organised in coastal areas of the state. Odisha has been put on "Yellow Alert" after the Indian Navy said that the cyclonic storm 'Fani' has intensified and turned into an "extremely severe cyclonic" storm. To ensure that widespread precautionary measures are in place in areas likely to be affected by the cyclonic storm, the ICG is in close liasioning with state administration as well as the India Meteorological Department (IMD), reported PTI. The storm over the Bay of Bengal which is about 660 km south-southwest of Puri is now threateningly rolling towards the Odisha coast at a speed of 14 km per hour. It is expected to cross Puri on May 3 afternoon, packing winds up to 175 kmph before landfall.

11:56am:A series of pre emptive measures were undertaken by the ICG to ensure safety of lives at sea.

.@IndiaCoastGuard initiated series of pre-emptive measures from first sign of weather disturbance in Bay of Bengal on Apr 23, 2019 and implemented lessons learnt from Cyclone Ockhi to ensure safety of lives at sea.#FaniCyclone

11:39am:India will be using a number of boats, buses and trains to evacuate as many as 800,000 people along its eastern coast.

11:33am:South Eastern Railway has reportedly cancelled 43 trains scheduled to run between Howrah and Puri, and other destinations in south India over the next two days.

11:14am:Over 8 lakh people in the coastal districts have been evacuated, as per reports.

11:12am:According to officials in the state government, all schools and colleges have been closed for the next three days.

10:54am:The NDMA has advised fishermen to not enter the west-central and off-north Tamil Nadu, Puducherry and South Andhra coasts as the sea conditions are likely to be phenomenal.

10:45am: The National Disaster Management Authority (NDMA) has issued a list of do's and dont's before, during and after a cyclone inflicts damage to life and property. As many as 97.40 lakh SMSes, including 26.30 lakh today, have been sent through Early Warning Dissemination System (Location Based Alert System) to people living in areas that are likely to be affected by cyclone, the government said.