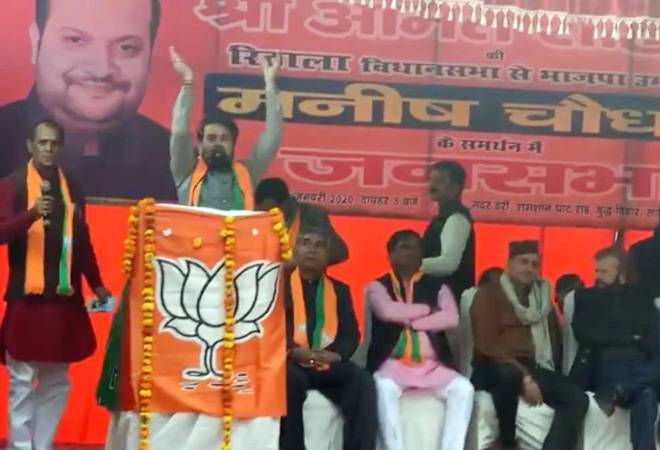 The Election Commission of India (ECI) is examining the viral video in which Union Minister of State for Finance Anurag Thakur can be seen prompting the slogan "goli maaro…", i.e., "shoot down" the traitors, at an election rally in Delhi.

Thakur is not seen the controversial part of the video but he eggs on the crowd and claps his hands. Several BJP leaders, party candidate from Rithala, Manish Chaudhary, were present while the sloganeering was on.

After Thakur, the rally was addressed by Union Home Minister Amit Shah.

After Thakur's video spread on social media, the opposition leaders including Abhishek Manu Singhvi, Randeep Singh Surjewala and Priyanka Chaturvedi took to social media to express disappointment and anguish over his conduct.

National spokesperson of Congress, Abhishek Manu Singhvi, said on Twitter: "This seems to be the modus operandi of the entire party."

Disappointing to see a young leader like #AnuragThakur provoking to make such poisonous slogans during electioneering.

This seems to be the modus operandi of the entire party. https://t.co/SwoOSR6ytd

Surjewala tweeted: "Deeply saddened by Anurag Thakur's conduct. Saw a remote ray of hope of sanity in him, only to realize today that ministerial posts and uprightness make strange bedfellows!"

The Mumbai unit of the Congress party also took to Twitter to take a jibe on Prime Minister Narendra Modi over Anurag Thakur's controversial statement.

Seems like your own minister doesn't heed your Mann Ki Baat. Yesterday you talked about violence not being a solution. And today @ianuragthakur incites brutality.

Either he doesn't agree with you OR

He knows that Mann Ki Baat is nothing but Jumlebaazi! pic.twitter.com/L77STyqMLQ

Priyanka Chaturvedi of the Shiv Sena tweeted: "Hope the junior Finance Minister will shoot the reasons for economic slowdown via the Budget 2020 when he's done shooting the 'traitors' or will the country again be taken for the 'Acche Din' ride?"

Turnover worth Rs 50 crore? Provide these payment modes to customers or pay Rs 5,000 fine per day