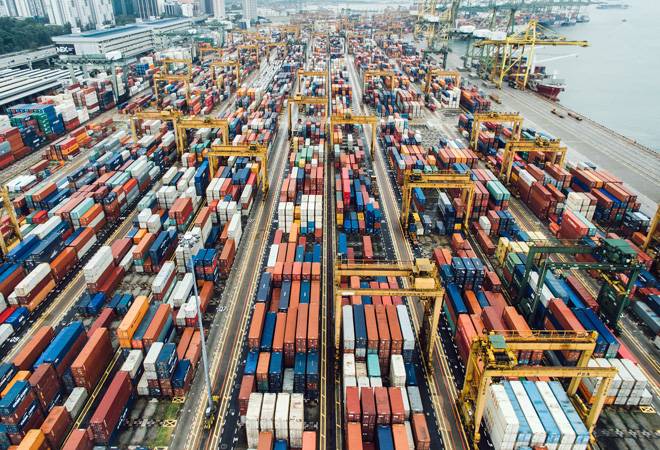 The foreign trade data for the month of June has made the task of export promotion of Union Commerce and Industry Minister Piyush Goyal tougher. India's exports have declined 9.71 per cent to $25.01 billion in June 2019 as compared to $27.7 billion in June 2018. Over two-third of the major product groups in the export basket have registered a fall (in exports) last month. The minister who has taken up measures to arrest the slump in exports in a time bound manner as his priority will now have to address broad-ranging problems across sectors for a meaningful intervention. It becomes all the more difficult as the global trade environment is far from being export friendly.

"The de-growth in exports is a reflection of sluggish global demand and rising tariff war. The high exports base of June 2018 contributed in no less measure. The softening of crude and steel prices also pulled down exports," says Sharad Kumar Saraf, president of Federation of Indian Export Organisations (FIEO).

In his reply to a question on export growth in the Lok Sabha on the status of Indian exports on July 10, Goyal made a case for seeing India's export performance in the backdrop of global trade developments and entire trade ecosystem, which has been going through a very challenging period for a couple of years. While global financial crisis of 2008-09 that accentuated after 2013-14 was the first trigger for world economy to experience a major trade slowdown, exports came under immense pressure again post 2013-14 due to accentuation of the global economic crisis in the second phase when countries like China also got adversely affected, Goyal had stated.

The foreign trade data for June shows that a significant jump from the annual export earnings of $538 billion registered in 2018-19 is not going to be an easy task in the current year.

The biggest worry is not the 9.7 per cent fall in exports that was primarily contributed by the fall in export revenues in two key sectors - petroleum (32.85 per cent) and gems and jewellery (10.67 per cent) in June. Excluding these sectors, the fall was 4.8 per cent. What is alarming is broad nature of export slump. The rice exports declined 28.05 per cent, cotton yarn, fabrics and made-ups 19.73 per cent, readymade garments 9.18 per cent, organic and inorganic chemicals 8.17 per cent and engineering goods 2.65 per cent. All major sectors of exports, including almost all labour-intensive sector exports besides petroleum for first time in recent times, were in the negative with such a decelerating trend, says Saraf.

Indian exports touched a new high when revenues hit $465.9 billion in 2013-14. It had also prompted the government to come out with a Foreign Trade Policy 2015-20 targetted at raising the country's merchandise and services exports from $465.9 billion to approximately $900 billion by 2019-20 and raise India's share in world exports (Goods and Services) from 2 per cent to 3.5 per cent. However, instead of a gradual increase, exports remained subdued for the next three years until it touched $498.63 billion in 2017-18, which is estimated to have grown further next year. While there is no way to get even remotely close to the foreign trade policy target set five years ago, the decline in exports in June shows that even maintaining the current pace of growth is difficult.

FIEO Chief is of the view that US-China trade war and developments in Iran has further aggravated the problem of the world economy. The uncertainty attached to it will also affect the flow of investment and add to currency volatility, he says.

While the government may not be able to do much to correct external issues that result in export slow down, it can try to address domestic issues including access to credit, cost of credit for merchant exporters, interest equalisation support to all agriculture produce exports, benefits on sales to foreign tourists and quick refund of GST.

Not all of that comes within the Commerce minister's mandate, and that is when export slump becomes a problem of the Central government, and not just an issue that concerns one ministry. The sooner other arms of the government, including finance ministry, begin to look at exporters' problems, the better.