Factory output shrinks 16.6% in June even as industries resume production

With the lifting of restrictions in the subsequent periods, industrial activity is resuming, government said while releasing the industrial output data for June 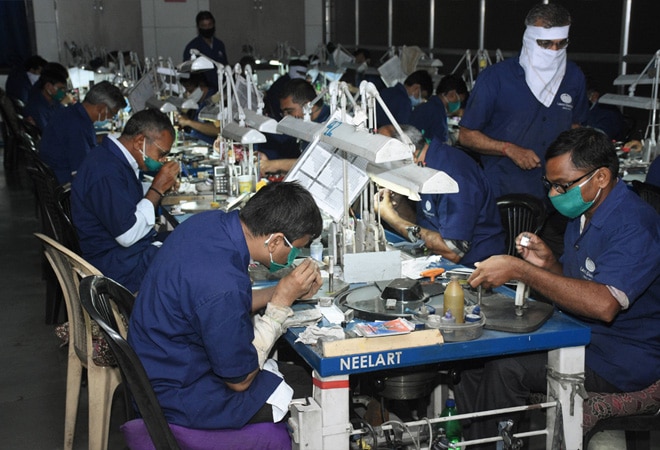 India's factory output, measured on the basis of Index of Industrial Production (IIP), contracted for the fourth straight month in June even as industries resumed production after lifting of the nationwide lockdown on June 1. IIP contracted 16.6 per cent in June compared with a 34 per cent contraction in May, according to the data released by the National Statistical Office (NSO) on Tuesday.

As per use-based classification, in June, the indices for primary goods stood at 109.2, for capital goods at 64.3, intermediate goods at 102.2, and for infrastructure and construction goods at 110.7. The indices for consumer durables and consumer non-durables stood at 77.4 and 157.3, respectively for the month under review.

"It may not be appropriate to compare the IIP in the post-pandemic months with the IIP for months preceding the COVID-19 pandemic," NSO said  in a disclaimer. However, on a monthly basis, the IIP has shown improvement. The index, which was 53.6 in April, improved to 89.5 in May and 107.8 in June.

"In view of the preventive measures and announcement of nationwide lockdown by the government to contain spread of COVID-19 pandemic, a large number of the industrial sector establishments were not operating from the end of March, 2020 onwards. This has had an impact on the items being produced by the establishments during the period of lockdown," the Ministry of Statistics and Programme Implementation (MOSPI) said.

ALSO READ: COVID-19 crisis: Small businesses in Maharashtra, Delhi to be hit most by reverse migration

Commenting on the June IIP numbers, Aditi Nayar, Principal Economist , ICRA, said, "The pace of contraction of various lead indicators, such as the output of Coal India Limited, electricity consumption and GST e-way bills narrowed to single-digits in July 2020, which suggests that the de-growth in the IIP would also shrink in that month. Nevertheless, we continue to caution that pent-up demand contributed to the improved performance of certain categories of manufacturing in June-July 2020, which may not sustain in August 2020 especially in light of the extension of localised lockdowns in various states."

"The IIP for the month of June slumped by 16.6 per cent, better than Reuters poll of (-)20 per cent. Ever since the nationwide lockdown began there has been an adverse impact on the production activity. The production rate remained in red even in June but the rate of fall has decelerated on a sequential basis mainly on account of relaxations in lockdown. Going ahead, with lockdown easing further, we may see some shining figures on the eight core industries like electricity, coal and will have a sliver lining on the growth," said  Rahul Gupta, Head of Research - Currency, Emkay Global Financial Services.