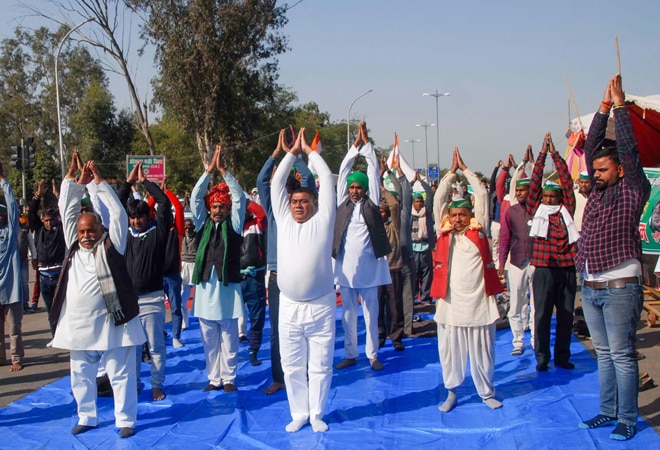 Farmers demonstrating against the Centre's new agri laws on Monday performed yoga on the Delhi-Noida Link Road at the Chilla border where they have been camping for 28 days now. The road remained closed for Noida to Delhi movement but was open for commuters travelling from Delhi to Noida, according to a police official.

At the Dalit Prerna Sthal, farmers belonging to BKU (Lok Shakti) and hailing from various districts of western Uttar Pradesh continued their agitation and submitted a memorandum of their demands addressed to Prime Minister Narendra Modi to the Gautam Buddh Nagar district administration.

"The memorandum has been submitted to Additional District Magistrate Diwakar Singh and mentions the demands of our farmers' union including the withdrawal of the three new farm laws, legislation on minimum support price (MSP) of crops and formation of a 'kisaan aayog' among others, BKU (Lok Shakti) spokesperson Shailesh Kumar Giri said.

BKU (Bhanu) and BKU (Lok Shakti) are not part of the Sanyukta Kisan Morcha, an umbrella body of 40 farmers unions, which are leading the charge at Delhi's border points in Singhu, Tikri and Ghazipur, but have extended their support to the protest. Additional District Magistrate Diwakar Singh, along with Noida City Magistrate Uma Shankar, met the protestors at the Dalit Prerna Sthal.

Singh told the protestors that misinformation has been spread that corporations would usurp the land of farmers under contract farming and clarified this is not going to happen.

Thousands of farmers are currently staying put at Delhi's borders with Haryana and Uttar Pradesh in protest against the Farmers' Produce Trade and Commerce (Promotion and Facilitation) Act, 2020, the Farmers (Empowerment and Protection) Agreement on Price Assurance and Farm Services Act, 2020 and the Essential Commodities (Amendment) Act, 2020.

The protesting farmers have expressed apprehension that these laws would pave the way for the dismantling of the minimum support price system, leaving them at the "mercy" of big corporations. However, the government has maintained that the new laws will bring farmers better opportunities and usher in new technologies in agriculture.

Also read: Farmers' protests: Centre calls next round of talks on Dec 30