Arun Jaitley asserted that India is on a "sound footing" as manufacturing and services sectors have begun picking up and the government was focused on strengthening the real economy. 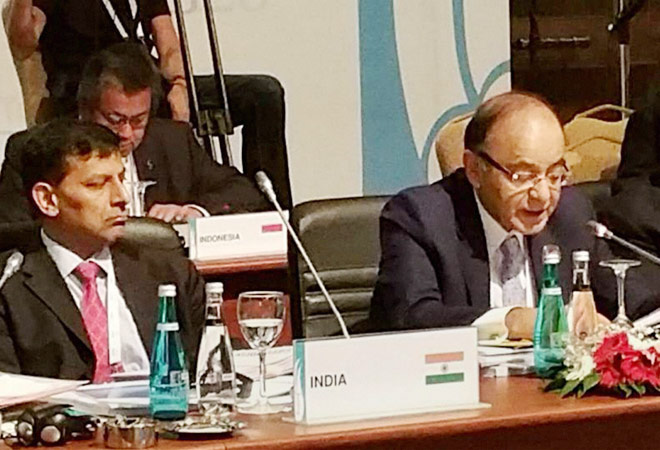 Factors like the Chinese devaluation of yuan and the US Fed's likely interest rate hike are "transient" and it will be only the real economy that will dictate the currency rate fluctuations and markets in India, said Finance Minister Arun Jaitley.

He asserted that India is on a "sound footing" as manufacturing and services sectors have begun picking up and the government was focused on strengthening the real economy rather than being swayed by the market volatility.

"At this stage, one needs to distinguish between the real economy and the impact of currency devaluation on stock market and domestic currency. Eventually when this transient phase blows over, it is the real economy that is going to matter. That is what will dictate both the currency valuation and the stock market itself," Jaitley told PTI in an interview on the sidelines of the G20 meeting of Finance Ministers and Central Bank Governors that ended in Ankara on Saturday.

As the Chinese devaluation triggered a global market sell off, including in India in the past few weeks, the issue dominated the G20 meeting and in the communique issued at the end of the meeting last night the 20 big economies, including India and China, committed themselves to refrain from competitive devaluation. They called for moving towards market-determined currency rates.

In his intervention at the G20 meeting on Saturday, Jaitley strongly pitched for global safety nets to address concerns over volatility in currency and stock markets, a demand that came against the backdrop of the economic shocks triggered by the Chinese devaluation of yuan.

He also sought well-designed and quickly-triggered safety nets under IMF by strengthening of liquidity arrangements by multilateral swap arrangements between member countries to tackle negative spillovers arising from domestic action.

"When compared to the rest of the world, we seem to be on a sound footing. The other positive indication that has now come from the US is that their second quarter growth figures are good and unemployment is going down," he said.

Jaitley said the leaders from across the world, who attended the meeting, took stock of the global economy besides addressing the set agenda of the scheduled sessions.

"Leaders gave explanations about what is happening at their end. As far as India is concerned, obviously last one month has been very choppy, including stock markets, predominantly for external reasons," the minister said, stressing the need to distinguish between the real economy and transient factors.

To a query on whether concerns on Chinese currency and possible US Federal rate hike were raised at G20 meet, Jaitley said comments were made from various quarters in this regard.

"The Fed hike remains a matter which the US will decide later this month. But, according to me, whatever situation emerges, that would be only a transient phase and therefore our response is that we have to strengthen our own real economy parameters," he said.

Jaitley said the G20 meeting has taken place at a time when the global economy is witnessing unpredictable growth prospects.

"Most of the economies are struggling both in terms of their growth rates and currency markets have gone through heavy fluctuations. We have taken this opportunity to strengthen our own policy framework and concentrate on the real economy. It is essential that India grows if we want to create jobs and bring prosperity for our people. Economy has now opened up in a big manner and more sectors are open for international investments," said the Finance Minister who also met Turkish businessmen during an interactive session here on the sidelines of G20 meeting.

Jaitley said the government needs to concentrate on initiatives that strengthen its real economy, particularly in manufacturing, infrastructure and service sectors.

"Even in the middle of hostile global winds, our efforts are to expedite growth and move towards a faster growth momentum. Between manufacturing and services sectors, we are an eight per cent plus growth rate economy. It is agriculture which pulls it down a bit," he said.

Jaitley said that as far as agriculture is concerned, "we started with a good June and July, but we have not had a very positive monsoon in August and September. Therefore some concerns are there".

"But overall with the manufacturing and services picking up and India's ability to post a respectable growth rate looks very positive," he noted.

Jaitley said India has an image of being an economy which has got a very large domestic market.

"We have a huge middle class, purchasing power is good, human resource is available in abundance. But I concede one of the things that was there is that it was considered non-competitive to do business in India, as permissions used to take time, governance was slow.

"That is one major area where a very fast movement is taking place. We are in the process of rationalising our direct and indirect tax structures. We have very large natural resources and now the government has evolved a methodology for allocation of those resources through a transparent market mechanism," the Finance Minister said.

"Clearances have been expedited, more and more laws have been liberalised. There are sectors where we have taken special initiatives", he added.

"We have been net importer of oil and some other commodities. The current global price trends have favoured us and we have been able to generate a large amount of savings that we have used for infrastructure creation and for benefit of the consumers. Inflation is well under control. We have a big food-grain surplus in India. Inflation which used to be very high a couple of years ago has now been contained. Our fiscal deficit has been going down. We have very normal current account deficit," Jaitley said.