"Second to pandemic relief, the government has placed maximum priority on productive domestic capital expenditure which has a high multiplier effect on the economy," the Economic Survey said The pace of government expenditure picked up with easing of movement and health-related restrictions in the third quarter. The total expenditure recorded a year-on-year (y-o-y) growth of 11 per cent, increasing from Rs 21.1 lakh crore during April to December 2019 to Rs 23.4 lakh crore during April to December 2020 (flash estimates). A monthly analysis revealed that total expenditure registered an increase only during the last three months of the year 2020 -- 9.5 per in October, 48.3 per cent in November and 50.2 per cent in December (flash estimates), on a yearly basis.

"Second to pandemic relief, the government has placed maximum priority on productive domestic capital expenditure which has a high multiplier effect on the economy," the Economic Survey added. 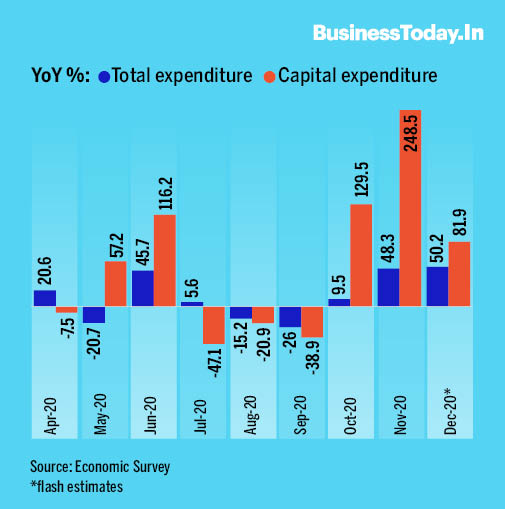 "It can clearly be seen that by timing the expenditure push, especially the capital expenditure, after the reduction in health-related curbs, the growth "bang" for the fiscal buck has been maximised," the Survey highlighted.

With effect from the third quarter, the spending ceilings were relaxed on the basis of revised full year allocations. The revised allocations reflected a substantial re-prioritisation of expenditure to those sectors with the most positive effect on the economy, either in terms of re-kindling growth or meeting welfare needs. "Ministries were allowed to decide the timing of expenditure within the revised allocation. Despite the absence of curbs on capital expenditure, the pace of capital expenditure was restrained in the first two quarters on account of movement restrictions in containment zones, and unwillingness or inability of contractors and workers to carry out works," it said.