Taking leaf out of industrial success of countries like China, South Korea and Vietnam, the DPIIT has mooted a slew of proposals to make Indian manufacturing globally competitive. The key areas chosen for giving thrust include defence, pharma, leather, automobiles and food-processing The draft strategy paper floated by the Department for Promotion of Industry and Internal Trade (DPIIT) on reforming industrial growth has identified multiple areas such as land and power for pushing reforms. It also focuses on taking the share of manufacturing in India's Gross Domestic Product (GDP) to 20% by 2025. 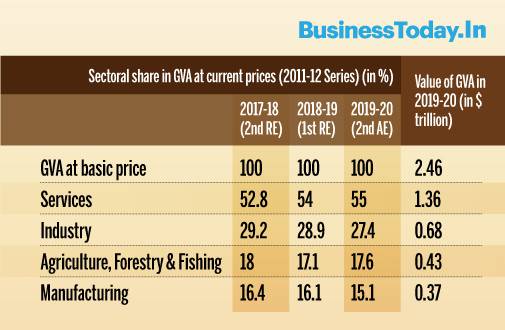 Taking leaf out of industrial success of countries like China, South Korea and Vietnam, the DPIIT has mooted a slew of proposals to make Indian manufacturing globally competitive. The key areas chosen for giving thrust include defence, pharma, leather, automobiles and food-processing. The department on Friday held a virtual meeting with top industry bodies to seek their suggestions.

The key focus area of the strategy paper is to scale up manufacturing in the country to achieve the goal of $5 trillion economy. It has noted that manufacturing goods enable a country to export to 'unlimited' international demand. Further, this circumvents the limitations of domestic demand which is driven by domestic income, thus acting as a binding constraint on growth.

"One of the most critical (steps) is to increase the share of manufacturing, which for India, has been steady at around 16 percent," the strategy paper said.

Among the key areas which require significant reforms are land, logistics and power. The DPIIT has proposed to revise the National Building Code of India to raise Floor Space Index (FSI) in a rule-based manner. FSI  in the Indian cities ranges between 2-5 with low variation across the city, while FSI in cities like New York varies from 15  in the  commercial business district to 0.5 in the suburban residential  areas.

The DPIIT has proposed to adopt alternative models for land allotment and acquisition. This includes annual payback of 10% of land value conditional on operations beginning after specified gestation period (3 years) with penalty up to 2% for idling of land. It has also suggested leasing of land at a concessional rate with payment holiday for 2-3 years after allotment.

In order to promote Special Economic Zones, it has been suggested to allow companies located in SEZs to sell a specified portion of their output to the domestic market as well. Developers could be permitted to enter into a long term lease agreement with stakeholders in Zones in line with the state policies.

For providing power at competitive rates to the industry, plans are afoot to deepen the wholesale power market in India. Improving service delivery and reducing tariffs through better competition among DISCOMS is another key area.

"State/UT governments may be pursued to fix electricity tariffs for industrial purposes at least for next 3-5 years to ensure stability of power charges to entrepreneurs," an industry executive aware of the plan said.

With a growing chorus for Vocal for Local, the DPIIT has also proposed to help industry in brand promotion.

"Incentives must be provided to develop capabilities and resources to help firms enhance their brands, nationally and internationally to boost awareness of Indian brands abroad and access global market intelligence," the DPIIT has stated.

Apart from measures to lower the cost of factors of production, select industries would be given additional push. For instance, electric vehicles would get a major push. Policy steps would be taken to boost Electric Vehicle (EV) penetration in the country.

In order to make India a global manufacturing hub for EVs, the government may consider entering into Free Trade Agreements and mining agreements with resource rich countries in Latin America (Bolivia, Argentina, Chile) and Africa (Congo, South Africa) and others to secure essential minerals like lithium and cobalt.