In the first half of the current financial year, the government has earned Rs 1,54,798 crore in the form of dividends and profits from its entities. This is equivalent to 95 per cent of the entire year's target of Rs 1,63,528 crore The government has earned highest revenue from dividends and profits in the first six months of this year since 2011-12. In the first half of the current financial year, the government earned Rs 1,54,798 crore in the form of dividends and profits from its entities. This is equivalent to 95 per cent of the entire year's target of Rs 1,63,528 crore. 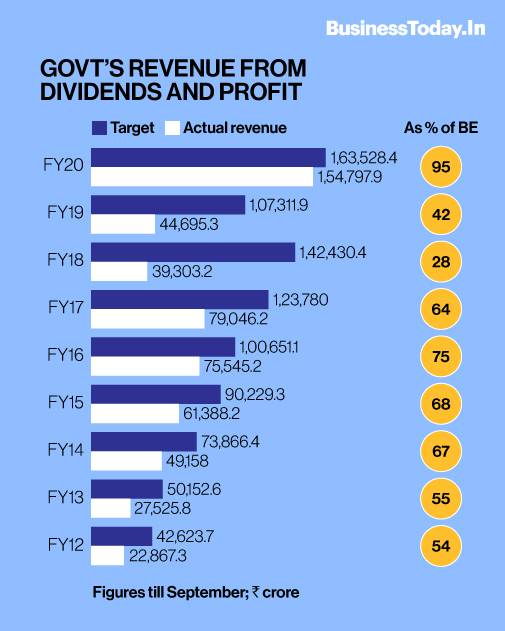 The data is from Controller General Of Accounts (CGA), which prepares monthly and annual analysis of expenditure, revenues, borrowings and various fiscal indicators for the Union Government. In the first half of the previous financial year 2018-19, government's earnings from dividends and profits were only 42 per cent which was in sync with the budgetary targets. But in the current year, the earnings of the centre has spiked propelling its total non-tax revenues to Rs 2,09,038 crore or 67 per cent of entire year's target. The same figure was just 44.5 per cent in the corresponding time frame in the last fiscal.

This earnings of the government from "dividends and profits" is 246 per cent higher than the first half of previous year's earnings.

Reserve Bank of India (RBI), oil marketing companies such as Indian Oil, Bharat Petroleum and Hindustan Petroleum share their profits and earnings with the government. Recently RBI shared a profit of Rs 1.76 lakh crore with the government. Moreover, the finance ministry has asked oil marketing companies to increase such payments by 15 percent, fixing the target of Rs 34,000 crore for this fiscal.

The government has stressed on increasing its revenue from profits and dividends to make up for the shortfall in revenue that will arise because of sops offered by the govt to revive the slowing Indian economy. As per a govt release, 32 such measures to revive have been announced by the ministry of finance post budget.