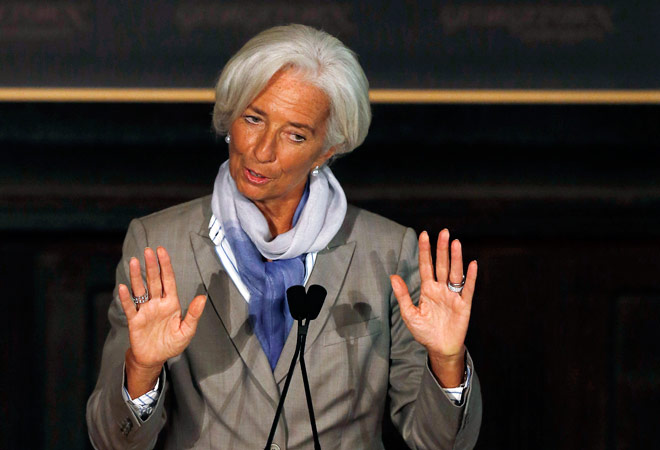 "Downside risks to the outlook have increased, particularly for emerging market economies. Against this backdrop, policy priorities have taken on even more urgency since we last met in April," she said after the G20 meeting.

"Downside risks to the outlook have increased, particularly for emerging market economies. Against this backdrop, policy priorities have taken on even more urgency since we last met in April," she said after the meeting.

"The major challenge facing the global economy is that growth remains moderate and uneven", she said, adding that for the advanced economies, activity is projected to pick up only modestly this year.

"For the emerging market economies, prospects have weakened in 2015 relative to last year, though some rebound is projected next year. For both the advanced and emerging economies, productivity growth continues to be low," Lagarde said but did not name any country.

Interestingly, Lagarde said in Ankara on Friday that India remains among the few emerging economies that continue to grow at a decent pace.

"If you ask me about the takeaway from this meeting, I will say it is uncertainty... the only thing that seems to be growing at the moment is unemployment," Lagarde said.

About the US, she said the Federal Reserve has not raised rates for a long time and it would be good if they do it now while ensuring that there is no uncertainty.

"It is also critical that the G20 (nations) increase their efforts to ensure a timely and effective implementation of their growth strategies. To keep the commitments made in Brisbane, more emphasis on implementation will be required between now and the G20 Summit in November when, along with the OECD, we will provide our assessment of progress towards the goal of achieving an additional two per cent of GDP growth by 2018," she noted.

Lagarde welcomed G20 nations' additional commitment to take steps to promote greater inclusiveness, and to provide an enabling economic environment for developing countries as they pursue their sustainable development goals.

"I urge the G20 (nations) to actively support the positive outcomes of the Addis Ababa Conference on Financing for Development (FFD) as well as the climate change agenda to be further discussed by global leaders in Paris later this year," she added.

The G20 meet also witnessed discussions about the migrant crisis in Europe.

Some of the participants, including IMF chief Christine Lagarde, were critical about certain European nations being biased against migrants on religious grounds.

With the crisis intensifying, the clamour is rising for the European Union to have a cohesive policy with regard to dealing with migrants.