In his speech which lasted for 92 minutes, PM Narendra Modi talked about the key problems facing the nation and how India could remove all obstacles to reach Rs 5-trillion economy mark. 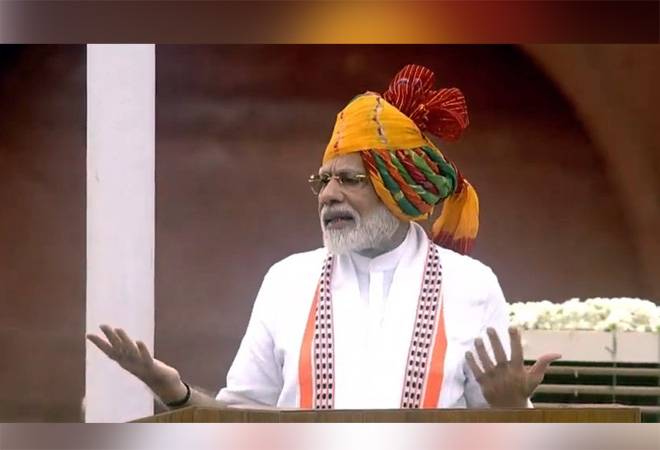 Prime Minister Narendra Modi addressed the nation from the ramparts of Red Fort on the occasion of 73rd Independence Day. In his speech, which lasted for 92 minutes, PM Modi talked about the key problems facing the nation and how India could remove all obstacles to reach Rs 5-trillion economy mark.  Here's a look at key highlights during his first independence day speech after the BJP govt came back to power with a thumping majority this year.

India to have chief of defence staff

In a big move to strengthen security forces, PM Modi announced the integration of all three forces under a defence head.

Rs 100 lakh crore to be invested on infrastructure

The government has decided to invest Rs 100 lakh crore on the country's infrastructure. " Today, according to the needs of the 21st century, modern infrastructure is being set up," Modi said.

"Population explosion in the country will create various problems for the coming generations. Those who follow the policy of small family also contribute to the development of the nation, it is also a form of patriotism," PM Modi said. In his address to the nation, PM Modi said the aim of his government is to ensure ease of living in India along with ease of doing business.

PM Modi emphasised on the need to boost exports in his address  to the nation. "Time has come to think about how we can boost exports; each district of India has so much to offer," Modi said.

Visit at least 15 tourist destinations across India before 2022

PM Modi has called upon Indians to visit at least 15 tourist destinations across the contry before 2022. This will promote tourism in the country.

PM Modi  said, "The target of nearly doubling the size of Indian economy to $5 trillion in five years may seem difficult. But when we have in five years (of BJP rule) added $1 trillion as compared to $2 trillion size achieved in 70 years of independence, then this target is achievable."

PM Modi said he failed understand the support the reasoning behind support to Article 370 and Article 35A. "If these provisions were so important for Jammu and Kashmir's welfare, why did previous governments left it as a temporary provision despite multiple opportunities to do," Modi said.

'Made in India' products should be priority PM Modi said the county should think of consuming local products, improving rural economy and the MSME sector.

The movement towards water conservation has to take place at the grassroots level. It cannot become a mere Government programme. People from all walks of life have to be integrated in this movement, PM Modi said.

Free India from single use plastic

PM Modi called upon citizens to abandon the use of single use plastic. "Can we free India from single use plastic? The time for implementing such an idea has come. May teams be mobilised to work in this direction. Let a significant step be made on 2nd October, " Modi said.