Addressing the US-India Strategic Partnership Forum through video conference, Modi said the pandemic has also shown the world that the decision on developing global supply chains should be based not only on costs but also on trust 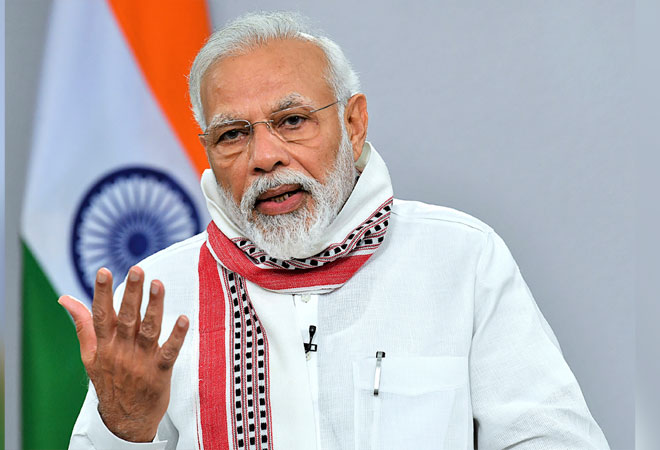 He also said India was among the first nations in creating a responsive system of lockdowns and to advocate the use of masks and face coverings as a public health measure while ramping up its health infrastructure.

In record time, Modi said, medical infrastructure was scaled up including for COVID-19 hospitals and ICU capacities while ramping up its count of testing labs from just one in January to almost 1,600.

The outcome of these efforts has been that a country with 130 crore people and limited resources has shown to have one of the lowest death rates per million in the world and also a steadily rising recovery rate, he said.

Addressing the US-India Strategic Partnership Forum through video conference, Modi said the pandemic has also shown the world that the decision on developing global supply chains should be based not only on costs but also on trust.

"Along with the affordability of geography, companies are now also looking for reliability and policy stability. India is the location that has all of these qualities," he said.

"It is a government, for which ease of living is as important as the ease of doing business," he said, while asserting that the prospective investors should know that his government believed in delivering results.

The prime minister also spoke of the 'Aatmanirbhar Bharat' (Self-Reliant India) campaign to woo investors, saying it "merges the local with the global".

"It ensures that India's strengths act as a global force multiplier. Time and again, India has shown that our goal is global good. 'Aatmanirbhar Bharat' is about transforming India from being just a passive market to an active manufacturing hub at the heart of global value chains," he said.

He cited a slew of reforms that have made India one of the lowest tax rate destinations with a further incentive for new manufacturing units and asserted that the country is committed to democracy and diversity which, he said, investors are looking at.

The prime minister said his government's reforms have made doing business easier and red-tapism lesser.

The work is underway on the world's largest housing programme with renewable energy infrastructure is being expanded and rail, road and air connectivity being boosted, he said.

"Our country is creating a unique digital model to build a national digital health mission. We are using the best of fintech to provide banking, credit, digital payments and insurance to millions. All these initiatives are being taken using world-class technology and global best practices," he said.

Noting that the current situation demands a fresh mindset that is human-centric with a spirit of cooperation between everyone, he said India did the same by scaling up its healthcare facilities in a record time to deal with the COVID-19 pandemic.

Modi said his government launched one of the largest support programmes for the poor globally following the COVID-19 outbreak in the form of the Pradhan Mantri Garib Kalyan Yojna, under which free foodgrains have been provided to over 80 crore people.

The pandemic has impacted several things but it has not impacted aspirations and ambitions of 130 crore Indians, he said, noting that India is becoming one of the leading attractions for foreign investment.

"Be it America or the Gulf, be it Europe or Australia-the world believes in us. We have received over 20 billion dollars of foreign investment flows during this year.

Google, Amazon and Mubadala Investments have announced long-term plans for India," he said.

The road ahead is full of opportunities in the public and the private sector, including the economic and social ones, he said, while citing examples of coal, mining, railways, defence, space, and atomic energy among those that have been opened up further, he added.