The Code on Industrial Relations allows companies with up to 300 workers to fire them without prior government approval; they also make it difficult for unions to go on strike without prior 60-day notice These new codes would eventually create a permanent cadre of insecure and temporary employees, some experts believe

India Inc has hailed the newly-enacted three labour codes, claiming it will spur much-needed investment and create more jobs in the country. But, a section of experts believe the law is tilted in favour of employers and put long-term industrial relations at risk.

They have termed some of the social security benefits provided for workers as "deceptive". The new law would eventually create a permanent cadre of insecure and temporary employees, they believe.

While industry has welcomed the labour law reforms that allow them to hire and fire, eminent academicians argue it will make future uncertain for employees. Some, however, disagree saying millennials prefer easy and flexible employment terms. They want to move from one firm or sector to another and gain varied expertise, they opine. 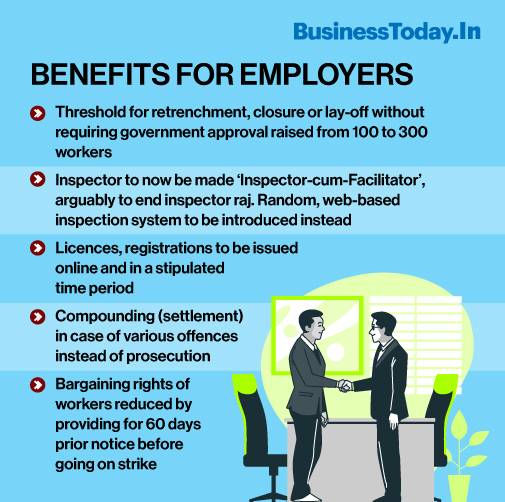 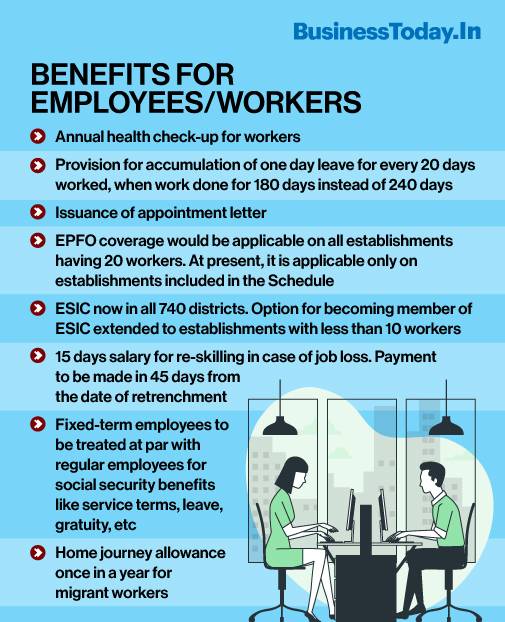 The Code on Industrial Relations allows companies with up to 300 workers to fire them without the prior government approval. The current threshold is 100 workers, making it a cumbersome process for industrial establishments to retrench or lay off. The other industry-friendly change in the new law is 60 days prior notice for unions to go on strike.

Ravi Srivastava, Director, Centre for Employment Studies, Institute for Human Development, said that steps such as annual health check-up and issuance of appointment letters do not mean much unless a minimum period of employment is brought into force. "One benefit is that they will get equal pay and the second is they will get social security benefits. These two benefits have been open to even contract workers under the old law. The only additional benefit for them is gratuity benefit. Now gratuity is the benefit which will accrue to them only if they complete a minimum period in an establishment," he said.

KR Shyam Sundar, XLRI Jamshedpur professor and a labour economist, says the code gravitates in the favour of employers. "Employers have been extended a tremendous amount of labour flexibility in order to determine terms and conditions of service in a unilateral manner and also to be able to dismiss workers on alleged acts of misconduct without even a domestic enquiry," says Sundar.

Not surprisingly, labour unions, including RSS-backed Bharatiya Mazdoor Sangh (BMS), have been up in arms against several key changes in the labour law. "The most controversial chapter VB (now Chapter X) on prior permission for lay off, retrenchment and closure is exempted up to three hundred workers. It will promote "ease of closing business" not "ease of doing business," said infuriated BMS General Secretary Virjesh Upadhyay.

The BMS, along with other unions, have launched protest marches and sit-ins against the labour law reforms. Various stakeholders have, however, unanimously welcomed social security benefits provided in the new labour law, saying it had been due for long.

The Social Security Code, nine related laws condensed into one, has widened the social security net, covering unorganised workers and gig workers. For the first time, a fixed term employee working for a certain period on contract has been given the right of social security like a regular employee.

Provision has been made to formulate various schemes for providing comprehensive social security to workers in the unorganised sector. A "Social Security Fund" will be created on the financial side to implement these schemes.

The new law extends social benefits to even those working with aggregators such as Ola, Uber, Swiggy and Zomato. "Aggregators will be required to contribute between 1-2% of annual turnover towards the social security fund for the welfare of unorganised workers," said Saraswathi Kasturirangan, Partner, Deloitte India. She termed the overall reforms and the consolidation of 29 different labour laws into four Codes as "forward-looking".

Former JNU professor Srivastava thumbed down the new legislations, saying they were neither in the interest of employers nor employees in the long run. However, there could be some short-term gains, he said.

"For the past many years, we have seen employers talk big but they do not want to invest in their workers' training and this is a standard economic theory. Globally, economists have shown that employers do not have interest in skill training of non-core employees. That means there is under investment in skills training," Srivastava said.