Nepal's foreign minister Pradeep Gyawali said if India can undertake negotiations with other nations like China to settle its border issues during the COVID-19 pandemic, then why can't New Delhi have a dialogue with Kathmandu 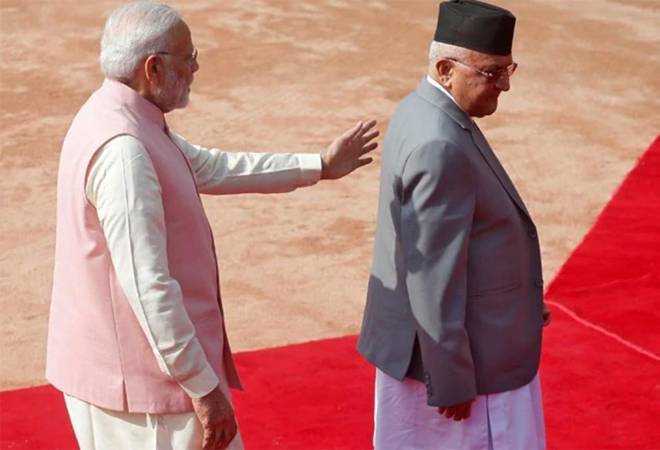 Nepal has said that its new map that redraws its border with India would be permanent with no room for change, but the country is ready for dialogue with India. The statement comes from the country's foreign minister Pradeep Gyawali after Nepal officially released its new political map showing Lipulekh, Kalapani and Limpiyadhura as parts of its territory in the wake of the country's ongoing conflict with India.

The country's parliament is set to hold a special session on Saturday to amend the constitution to change the map laying claim over the strategically key areas of Lipulekh, Kalapani, and Limpiyadhura along the border with India.

Gyawali told India Today TV that the said changes have been supported by all political parties, adding the map is going it be "permanent" and that there is no room for any change in the same.

He further stated that all parliamentary procedures will be concluded by next week following a formal amendment to the constitution which will be approved by the President of Nepal.

"The decision to change its map came after India made changes to its map during the reorganisation of Jammu and Kashmir on November 2, 2019," Gyawali enunciated setting out that Nepal's decision stands permanent because the three territories (of Lipulekh, Kalapani and Limpiyadhura) belong to the country "and there's no ambiguity over that".

However, "a dialogue is required to formally recognise which part belongs to Nepal" the foreign minister emphasised. While the decision, once signed and sealed by parliament, cannot be changed, he stressed that both sides should open informal channels of communication to restart dialogue.

"There has been no response to our letter from the Indian side regarding the start of foreign secretaries-level meeting. However, both embassies are active and trying to open up formal communications," Gyawali told India Today TV.

When asked if Nepal's Prime Minister (PM) K P Sharma Oli will speak to his Indian counterpart, PM Narendra Modi, Gyawali informed, "The two PMs have developed a personal friendship over the past couple of years. We have formally said that Nepal is always willing to dialogue."

On India's silence for holding foreign secretary-level talks with Nepal, he said if India can undertake negotiations with other nations like China to settle its border issues during the COVID-19 pandemic, then why can't New Delhi have a dialogue with Kathmandu.

"As you have seen recently, Army commanders of India and China sat together to discuss border issues. If that can happen between India and China, then why can't it happen with other countries -- Bangladesh, Nepal," the Nepalese foreign minister said.

Clearing the air over talks of China's influence on Nepal's decision, Gyawali clarified, "Nepal is the only country in South Asia that was never colonised. We have good relations with both of our neighbours -- India and China. Nepal cannot shut the door on one side. If you compare our engagements with India and China, there's no comparison. India is engaged with China many times more in terms of trade partnerships or boundary linkage."

Asserting that any resolution to the current crisis between India and Nepal would require "political will" from both sides. He hoped that the prime ministers of both nations would speak over the phone.

Nepal last month released a revised political and administrative map of the country, laying claim over strategically key areas. India has maintained that these three areas belonged to it.

Earlier this week, the Nepalese Parliament unanimously endorsed a proposal to consider the constitution amendment bill to pave the way for endorsing the new map.

The ties between India and Nepal came under strain after Defence Minister Rajnath Singh inaugurated an 80-km-long strategically crucial road connecting the Lipulekh pass with Dharchula in Uttarakhand on May 8.

Nepal reacted sharply to the inauguration of the road, claiming that it passed through Nepalese territory. India rejected the claim, asserting that the road lies completely within its territory.

India sternly asked Nepal not to resort to any "artificial enlargement" of territorial claims after Kathmandu released the new map.

Nepal's PM Oli has said that his government will seek a solution to the Kalapani issue through diplomatic efforts and dialogue on the basis of historical facts and documents.

He claimed that India built a Kali temple, created "an artificial Kali river" and "encroached the Nepalese territory through deploying the Army" in Kalapani. The river defines the border between the two countries.

"We have already made our position clear on these issues. India deeply values its civilisation, cultural and friendly relations with Nepal. Our multi-faceted bilateral partnership has expanded and diversified in recent years with increased focus and enhanced Government of India's assistance on humanitarian, development and connectivity projects in Nepal," he said.