JNU fee hike protests: The JNU students' union (JNUSU), JNU administration and hostel presidents are scheduled to meet the three-member committee formed by the HRD ministry to bring back normalcy to the university 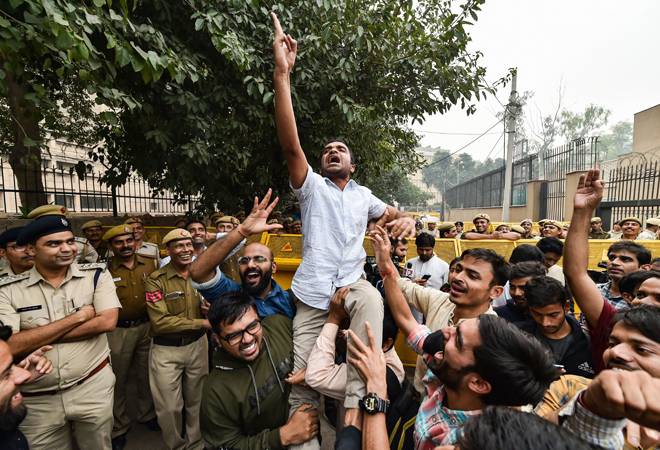 Students of the Jawaharlal Nehru University (JNU) will continue their protests on Tuesday after their clash with the Delhi Police on Monday. Parts of the city remained tensed on Monday as hundreds of students took to the streets to protest against the fee hike. The students marched towards the Parliament where the first day of the Winter Session was underway.

The JNU students' union (JNUSU), JNU administration and hostel presidents are scheduled to meet the three-member committee formed by the HRD ministry to bring back normalcy to the university. "The fact remains that there has been no fee hike rollback as claimed by the administration and rather than any relief to BPL [Below Poverty Line] students, their misery has been compounded. The reality of that rollback is that virtually no fee has come down. The monthly hostel and mess expenses of students are set to rise from 2700 [Rs] per month on an average to 5500 [Rs]," stated a memorandum submitted by the students to the ministry.

The students have claimed that they were brutally beaten by Delhi Police personnel who lathicharged the protesting students. Follow the JNU fee hike protest LIVE updates here:

6:29 pm: Delhi Police has lodged two FIRs on Tuesday in connection with the protest by JNU students. One FIR was registered at the Kishangarh police station, while another was lodged at the Lodhi Colony police station.

4:07 pm: JNUSU has said that protests will continue until fee hike is completely rolled back and Vice Chancellor resigns.

As JNU protests intensify, private photos of protesting students are stolen from FB & circulated publicly by govt supporters. But JNU students won't be deterred by these cheap tactics, because it's not about any individual's habits/looks; it's about creating an egalitarian future

12:20 pm: The JNUSU claimed that the Delhi Police beat up specially-abled students. "When Shashibhushan brought to the attention of the police personnel that he is visually impaired student...the Delhi police very insensitively reacted saying 'Andha hai to protest karne kyon aata hai' (If you are blind then why have you come for the protest). After saying this, he was severely beaten up by the police by kicking him on his chest and stomach and throwing him on the ground," the JNU Visually Challenged Students Forum said in a statement.

12:10 pm: Congress national spokesperson Jaiveer Shergill said, "All those MPs labelling JNUProtest against fee hike as "Anti-National" first should give up their salaries & travel allowances (both on account of tax payers money) including those free Air India tickets which they use every Friday to travel back home."

11:55 am: Rajya Sabha has been adjourned over the protests by Opposition parties on the JNU fee hike issue as well as on Jammu and Kashmir situation.

11:40 am: In a statement JNUSU called November 18 a "black day". The union said that the Delhi Police and the Home Ministry are beyond condemnation.

11:10 am: Delhi Police likely to file FIR over JNU protest

11:00 am: Digvijaya Singh condemns Delhi Police's handling of the situation.

I strongly condemn this action of Delhi Police but I condemn more the attitude of the JNU administration and the HRD Ministry. Least they can do is to reimburse all expenditure of students in JNU who can't afford this fee hike. https://t.co/0o3eH7cPwF

10:50 am: Students took to social media to post pictures and videos to show how they were handled by the authorities.

Three images. Three enough images to showcase what the Modi-Shah Model wishes to implement by attacking JNU. A university that has always set standards for social justice and remarkable academic temperament.#EmergencyinJNU#JNUProtests#StandWithJNU#JNUWar#TaxPayersWithJNUpic.twitter.com/xR3OHhmD22

10:40 am: The Delhi Police has denied the claims and issued a statement saying, "There was no use of water cannons, tear gas shells or lathi-charge at any stage of the protest. Women staff was deployed in adequate numbers to deal with female protesters. Apart from 10 companies of CAPF, around 800 Delhi Police personnel were deployed to handle the protest and ensure maintenance of law and order."

10:30am: The JNUSU is scheduled to hold a press conference at 4pm today.