Number of COVID-19 cases in India climbed to 1,965 on Thursday while death toll rose to 50, according to the Union Health Ministry 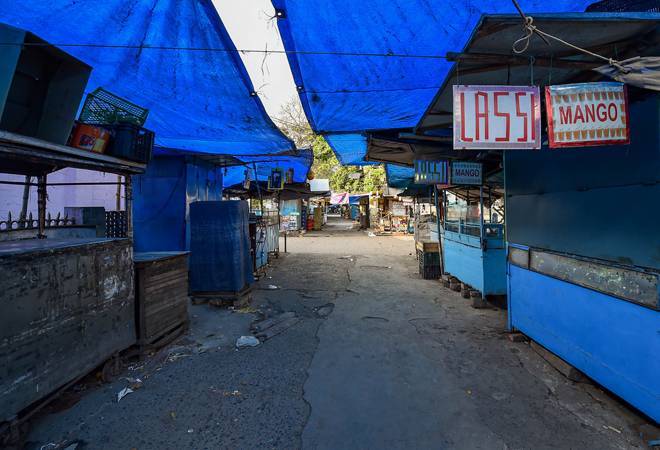 Practices such as respiratory hygiene, hand washing, and other protective activities at an individual level may help maintain a flattened COVID-19 curve

The current 21-day lockdown may help reduce the projected number of symptomatic novel coronavirus cases in India by nearly 83 per cent till day 20 from the beginning of the intervention, thereby flattening the COVID-19 curve, scientists say.

The modelling study by researchers from Shiv Nadar University in Uttar Pradesh considered the optimistic scenario, where cases are isolated immediately within one or two days since showing symptoms.

"We also assumed 80 per cent to 90 per cent of the population resorted to social distancing," Samit Bhattacharya, Associate Professor at Shiv Nadar University told PTI.

The number of COVID-19 cases climbed to 1,965 in the country on Thursday while the death toll rose to 50, according to the Union Health Ministry.

The researchers believe that under the most optimistic scenario, the 21-day lockdown, announced by the government on March 24 to prevent the spread of the novel coronavirus, may help in slowing transmission and "flattening" the COVID-19 curve.

The researchers said the typical goal of flattening the curve is to minimise the number of cases over extended days, to gain more opportunities for interventions to control the spread of the virus meantime, and reduce the burden on the health care system.

At the beginning of the lockdown, India was in the second phase of the COVID-19 outbreak, with the disease spreading to close contacts, and there was no evidence for community transmission. However, the scientists said the country appeared to have slid into the third phase of the outbreak.

Some infectious disease carriers can unusually transmit the pathogen onto a dozen-to-few dozen others, called super-spreaders, they said.

The researchers estimated the number of symptomatic cases during the 21-day lockdown by considering a scenario where the basic reproduction ratio (R0) is 2.2, with super-spreading events triggered by COVID-19 carriers following the 20/80 rule, and an assumption of 30 per cent symptomatic cases.

R0 is an indicator that quantifies the nature of spreading infection -- a number that describes how many people a newly infected person is likely to pass the virus to others, the scientists explained.

For example, the R0 of influenza varies between 1.3 to 2, according to earlier studies, meaning that an infected person could potentially spread the flu virus to one to two others in a fully healthy population.

They said the super spreading 20/80 rule means out of total infected persons, 20 per cent of them contribute in spreading 80 per cent of infections in healthy population.

India, with a population density of 412 people per square kilometer, and an average range of 4.5 to 5 people in each family which typically has one person above 60 years of age is undoubtedly predisposed to the easy spread of highly transmissible COVID-19, the researchers said.

They believe the country may also have witnessed a super surge in symptomatic cases. "Our prediction shows that India could have embraced about 5,000 and 30,790 symptomatic cases in the next 10 days and 20 days, respectively," said Naga Suresh Veerapu, Assistant Professor at Shiv Nadar University.

"The projected number of cases can reach approximately 2,70,360 and deaths 5,407 by day 40 in the absence of an intervention," Veerapu said. A flattened COVID-19 curve for the next two or three months is difficult to comprehend, the scientists said.

All measures that provide few opportunities for the virus to spread must be continued, which not only limit any individual's infection hazard, but also protect the entire community, they added.

These measures may include, avoiding large gatherings, 14-day quarantine for suspected cases of infection, systematic surveillance, and expanded testing for the identification of COVID-19 infections, continued work at home for employees, the researchers said.

Practices such as respiratory hygiene, hand washing, and other protective activities at an individual level may help maintain a flattened COVID-19 curve, they added.