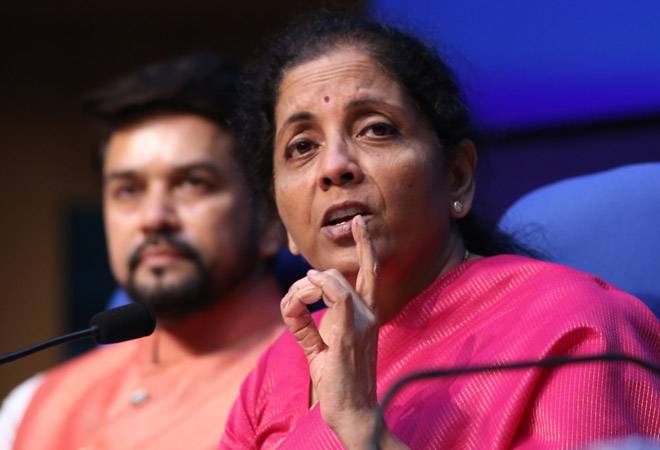 Finance Minister Nirmala Sitharaman on Thursday asserted her Budget proposals are aimed at improving ease of living and reducing pain of citizen, even as she did not accept the opposition demands of withdrawing cess on petrol-diesel and 2 per cent TDS on cash withdrawal.

Replying to the discussion in Lok Sabha on Finance Bill (2) 2019, which contains tax proposals for the current fiscal, the Minister said various initiatives in the Budget seek to promote a less-cash economy.

"The intent of the government is to ensure minimum government, maximum governance. Ease of living is the primary driving force of Prime Minister Modi...we are trying to reduce the pain and making sure ease of living dominates everything that we do as regards to taxation," she said while winding up a debate, which lasted for about three hours.

The Minister did not accept the opposition demand to do away with 2 per cent TDS on cash withdrawal in excess of Rs 1 crore from banks, withdraw additional cess on petrol and diesel and remove 10 per cent customs duty on the newsprint.

On the proposal to hike tax liability on individuals earning more than Rs 2 crore, she said it will not impact Foreign Portfolio Investors (FPIs) provided they organised themselves as company.

Following the increase in surcharge, the effective income tax rate for individuals with taxable income of Rs 2-5 crore will go up from 35.88 per cent to 39 per cent, and for those above Rs 5 crore it would go up to 42.7 per cent.

"There is also issue of FPI where you are trying to include tax deduction from HUF on TDS. It has an impact on those FPI who are registered as trust.

"There is an option for FPIs to register as company. But when you are registered as company, you don't have problem of tax which we are talking about," she said.

However, she said, a trust is treated as taxable entity.

Referring to imposition of 2 per cent TDS on cash withdrawal beyond Rs 1 crore, she said the tax could be adjusted against the liability of the assesses and hence there will be no additional burden on them.

"I want to assure the members, if there are people who are tax paying citizens, who have withdrawn, this TDS will be adjusted with the total tax due.

"So, it's not over and above what is expected to pay as tax but it is going to be reconciled with the total tax claim which can be levied on the individual, it is not something running parallel to it," she said.

With regard to simplification of tax laws, the Ministry has already set up a task force to finalise a new Direct Tax Code (DTC) which will submit its report by month end, she said.

Several members have asked the government to reduce hike in customs duty on newsprint saying it would badly hurt the small and medium newspapers.

They had also demanded withdrawal on cess on diesel and petrol arguing that it was adversely affecting life of people.

The Finance Minister said that seven legislations under indirect taxation including Goods and Services Tax (GST) are being amended to ensure greater simplicity.

With regard to stress on NBFC sector, Sitharaman said the government has come up with proposal that interest on bad and doubtful debt of systematically important non deposit taking NBFCs shall be levied tax on receipt basis and not on accrual basis.

This is an important change, which is necessary considering that challenges that NBFCs are facing, she added.

Besides, she said, amendment to RBI Act is to strengthen RBI's regulatory powers and regulating the NBFCs.

Amendment will empower the RBI to supersede the boards of NBFCs or to remove its directors or to amalgamate NBFC in public interest and maintain financial stability.

With regard to withdrawal of tax exemption on pension given to armed forces personnel disabled in the line of duty, she said it was done with the advise of armed forces headquarters.

"The Finance Ministry had not taken a call on their own.

It was the recommendation given by the armed forces headquarters... it was not a part of my finance bill," she said.