Modi govt to state its stand on Article 35A before Supreme Court: report

While the stance government will take on Article 35A is still under wraps, it will use this opportunity to declare its intent on the constitutional validity of Article 35A. 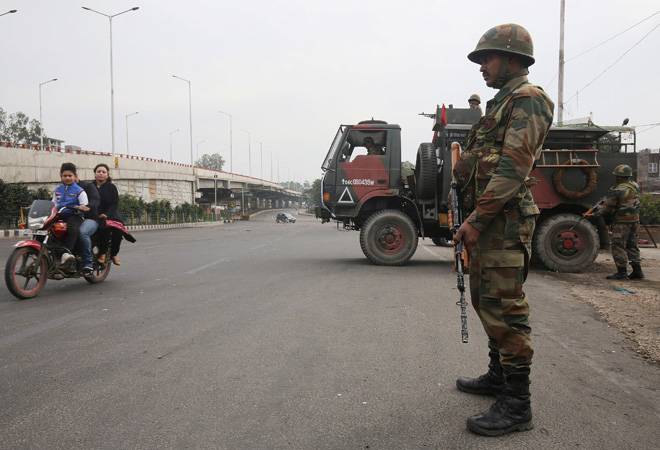 Tensions have been on the rise on Jammu and Kashmir ahead of the Supreme Court hearing on Article 35A. File photo: Reuters

As tension prevails in the Kashmir Valley after the dastardly Pulwama terror attack and impending Supreme Court of India hearing on Article 35A, reports have surfaced suggesting that the Centre will make its intentions clear on the matter before the apex court. The Supreme Court is set to hold an in-chamber hearing on petitions challenging the constitutional validity of the contentious article next week. Ahead of the court date, sources have told India Today that the Modi government will make an oral mention on the issue during the hearing, but not a written submission.

While the stance government will take on Article 35A is still under wraps, the report stated that the government will use this opportunity to declare its intent on the matter. Discussions to finalise government's stance have been restricted to a core group comprising Prime Minister Narendra Modi, BJP president Amit Shah, Home Affairs Minister Rajnath Singh and Finance Minister Arun Jaitley. The group is considering the overall situation before deciding on its response, the India Today report quoted a senior BJP leader.

The senior BJP leader told the news channel that irrespective of what stance the Modi government takes on Article 35A in Supreme Court, it still believes that the Parliamentary route was bypassed in 1954 by the then President of India Rajendra Prasad while incorporating it in the Constitution of India. If the government chooses to state its belief that the Parliamentary route was before the Supreme Court, it will be tantamount to voicing support in favour of the petitions questioning the constitutional validity of Article 35A.

The issue of Article 35A has been a part of the core agenda of the BJP and its ideological parent RSS. With less than two months left before the crucial Lok Sabha elections, the BJP might be gunning for political dividend by taking a stand on the issue. However, a signal of intent not favouring the law could have severe implication for Jammu and Kashmir and mainstream parties in the state. While they have everything to lose, separatist parties stand to benefit by bolstering their arguments against the mainstream parties.

The government moving against the Article 35A, if it comes to that, could cause tensions in Kashmir Valley to rise. Such a move will cost mainstream parties political ground in Jammu and Kashmir, especially BJP, and will give a fillip to separatist factions by allowing them to bolster their argument that the Indian government does not care for the welfare of Kashmiris.

Meanwhile, separatist leader Yasin Malik has been arrested before the Supreme Court hearing on Article 35A. Many activists belonging to the Jamaat-e-Islami, an organisation affiliated with the separatist conglomerate Tehreek-e-Hurriyat, have also been detained.