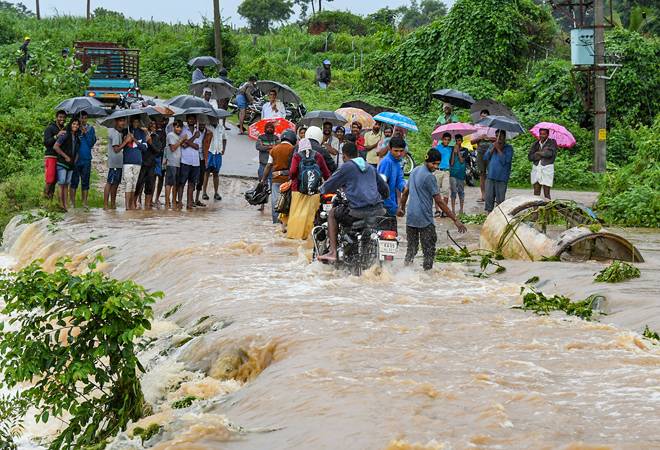 Monsoon rains have wreaked havoc in Kerala, Maharashtra, Karnataka, Assam, Odisha and eastern part of India. At least 22 people have lost lives in floods in Kerala alone, and over 10,000 people have been evacuated to safe areas. At least 27 people have drowned in Maharashtra. In Karnataka, nine people have drowned while over 44,000 people have been displaced. Incessant rains have also triggered flooding in several parts of Madhya Pradesh, Goa, Gurajat, Andhra Pradesh, Odisha and West Bengal, leading to major devastation. The Kerala government has issued a red alert in the wake of excess rainfall. The Kochi International airport has suspended all operations till Sunday as the runway area in the airport is water logged due to flood. The Kerala government has declared holiday for the day for all schools. Wayanad, Kozhikode and Idukki are the most-affected districts. The Army and National Disaster Response Force (NDRF) have been called to rescue people stuck in flood-prone areas. Kerala had also seen the worst floods in a century in 2018, in which over 417 people lost lives and several went missing. As per the Indian Meteorological Department (IMD), the next two days will see more rains in Gujarat, Karnataka and Maharashtra.

Follow BusinessToday.In live blog for all the latest updates on Monsoon rains across India

1.32 PM: Red alert has been issued for 9 districts in North and Central Kerala.

#UPDATE: A total of 6 bodies have been recovered so far, from Meppadi in Wayanad district, where a landslide occurred yesterday. #Keralahttps://t.co/f9g3Jto971

1.28 PM: Indian Navy has opened its air base at Cochin for operation of civil flights.

Heavy rain has increased across most parts of the State. Red alert has been issued for 9 districts in North and Central Kerala, 3 districts in Central Kerala are under Orange alert and remaining 2 southern districts are issued yellow alert. #KeralaFloodspic.twitter.com/Ir2g7Hwwlu

Around 22 people have lost their lives in the Kerala floods and more than 22,000 have been evacuated. According to latest updates, 22,165 people have been shifted to 315 relief camps in the state. Wayanad, Malappuram, Kannur and Idukki are the worst affected. Red alert has been issued for nine districts in the state.

#KeralaFloods#IndianNavy opens its air base at Cochin for operation of civil flights. @CMOKerala@DefenceMinIndia@thetribunechd@indiannavy

12.03 PM: RahulGandhi spoke to the Prime Minister, seeking all possible assistance for the people severely affected by the floods and landslides in the state, especially in Wayanad.

11.55 AM: Traffic movement, through Pattambi bridge, stops as the bridge is flooded.

11.49 AM: Weathermen are predicting heavy to very heavy rains over many parts of the the Gujarat region on Friday, says SkymetWeather.

No relief in terms of rains is expected for the next two to three days. Heavy to very heavy rains will continue  in parts of Wayanad, Idukki, Malappuram, Kochi, and Kozhikode which also remain on red alert. -- SkymetWeather

Congress leader Rahul Gandhi called Prime Minister Narendra Modi on Friday to talk about the flood situation in Kerala. He also sought financial assistance for those affected in the flood-hit state, including in his constituency Wayanad.

10.54 AM: 500 passengers stranded in Maharashtra's Kolhapur

10.50 AM: The Kerala government has declared holiday for the day for all schools across the state due to incessant rains.

10.34 AM: Visuals of Areekode town of Kozhikode district where rains have flooded markets and residential areas.

#MaharashtraFlood: More than 500 passengers stranded in Kolhapur's Kini village, due to heavy rains in the region. pic.twitter.com/987NLMOcVT

10.32 AM: A woman, child dies in cloudburst in Uttarakhand.

10.30 AM: 15 people rescued from Bijapur district in Chhattisgarh.

Kerala: Streets in Areekode town of Kozhikode district are flooded due to heavy rainfall in the region. pic.twitter.com/4wXvVkCvu0

10.28 AM: NDRF perssonnel carrying out rescue ops in Maharashtra.

Uttarakhand: One woman and a child died in a cloudburst which has occurred in Padmalla and Faldiya Gaon village of Dewal block in Chamoli district. About 10 houses of the vaillages have been damaged in the incident. Rescue team and district administration are present at the spot. pic.twitter.com/eSYMCTXnVr

10.03 AM: Domestic airline IndiGo, in a statement said, "All our flight operations to/fro Kochi are impacted due to airport closure owing to flood situation".  "We are offering change and cancellation fee waiver to passengers travelling between August 9 and August 11, 2019," IndiGo added.

Chhattisgarh: 15 people were rescued from Gudra nullah at Bhairamgarh block in Bijapur district yesterday, where they were stuck after it got flooded due to rainfall. They were returning from Barsur to Mangnar village in Dantewada when they got stuck. pic.twitter.com/GhaguNJwT6

10.01 AM: Traffic movement through Pattambi bridge stopped, after the bridge was flooded due to overflow of Bharathappuzha river. -ANI

9.58 AM: 54 people have been rescued by NDRF from Puthumala near Meppadi in Wayanad, Kerala.

#Floods2019@NDRFHQ carrying out rescue ops in Maharashtra. The force has distinguished itself with capability, courage and commitment.#maharashtrafloodspic.twitter.com/dd3ggdz9XU

9.56 AM: Six Air India Express flights have been rescheduled due to operational reasons.

#6ETravelAdvisory: Due to airport closure, flights to/fro #Kochi are impacted. You may visit plan B https://t.co/DSSJqiVQRK to opt for an alternate option or get a full refund. pic.twitter.com/y1RI9c47ON

8.30 AM: The Kochi International airport on Friday suspended all operations till Sunday as the runway area in the airport is water logged due to flood, the airport authorities said. "Kochi Airport closes operations till 1500 hrs of Sunday (11/08/2019)," a statement issued by the Airport said. A Cochin International Airport Ltd (CIAL) spokesman said the runway area of the airport is water logged due to the flood.