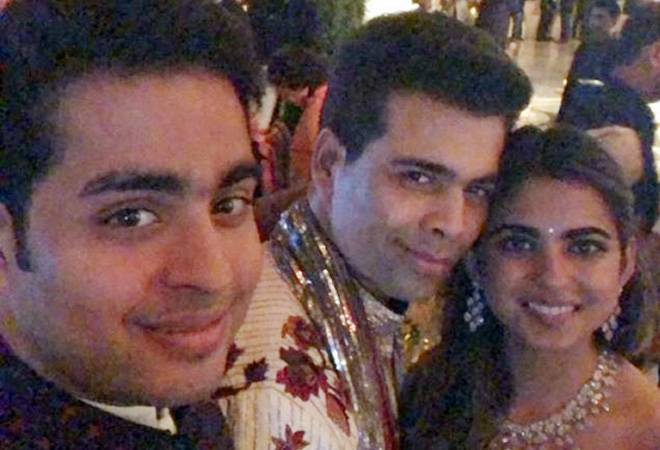 From the looks of it, the Ambanis are all in a mood to celebrate. And why not, the heiress is all set to tie the knot with business tycoon Ajay Piramal's son Anand Piramal. Anand proposed to Isha Ambani following which the couple celebrated the joyous occasion with their family members. Continuing the celebrations, the Ambanis threw an engagement bash in Mumbai a day later. Among the high-profile guests that attended the party were Shah Rukh Khan, Sachin Tendulkar, Karan Johar, Aamir Khan, Ranbir Kapoor and Anil Ambani.

Isha will marry Anand this year in December. Anand Piramal is a Harvard graduate and currently holds the position of executive director at Piramal Enterprises. Soon after completing his education at Harvard, Anand started two different ventures - Piramal Realty and Piramal eSwasthya - under Piramal Enterprises. Anand also holds a Bachelor's Degree in Economics from University of Pennsylvania. At Harvard Business School, he pursued his Masters in Business Administration.

Isha is a board member In Reliance Jio and Reliance Retail. She is a graduate from Yale University where she studied Psychology and South Asian Studies. She will complete her Masters in Business Administration later this year from the Graduate School of Business, Stanford.

The Amabanis and the Piramal family go a long way. The two families have known each other for 40-odd years. In fact, according to sources, Ajay Piramal and his wife Swati were partly instrumental in the marriage of Mukesh Ambani with Nita. They had apparently recommended Nita to Mukesh Ambani's parents Dhirubhai and Kokilaben.

Isha and Anand's is the second engagement party in Ambani family - that too this year. Earlier in March, Mukesh Ambani's son Akash Ambani got engaged to Shloka Mehta, daughter of diamond merchant Russell Mehta. The two families and close friends gathered at a plush five-star resort in Goa for a 'get-to-know-each-other' event before the formal engagement. Following the party in Goa, the couple visited Siddhivinayak Temple in Mumbai to seek blessings. Following that, the couple threw a party for their friends and family. Many Bollywood stars including Shah Rukh Khan, Aishwarya Rai, Karan Johar, Katrina Kaif, John Abraham and Kiran Rao attended the party.

Rupee continues its free fall against US dollar: Should India be worried?