Centre assured that the states that they will not be denied compensation even if they don't opt for either of the two borrowing options; compensation cess of Rs 20,000 crore will be disbursed tonight 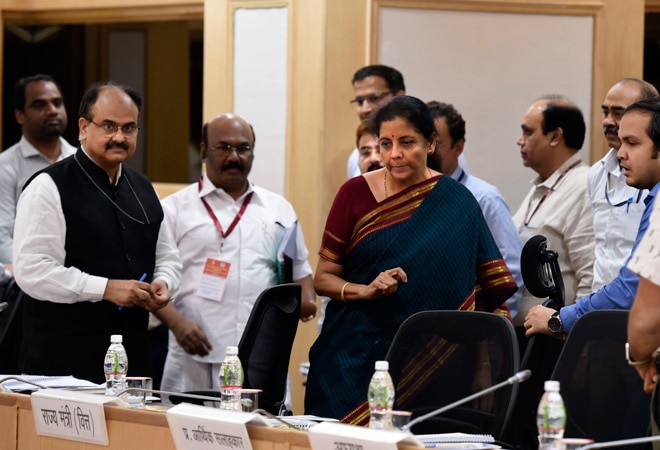 The GST Council will meet again on October 12 to decide on the contentious issue of borrowing for plugging states compensation gap as the issue could not be resolved at the 42nd GST Council meeting on Monday.

Finance Minister Nirmala Sitharaman informed that the issue was discussed throughout the day and some states, which have not opted for either of the two options proposed by the GST Council in its 41st meeting, wanted a third option for which they have written to the prime minister too.

Nirmala Sitharaman said that those states which have not opted for any of the options wants the Centre to borrow the full amount of the compensation gap.

Meanwhile, Sushil Modi also requested the Council to at least allow those states, which have opted for option 1, to go ahead with their borrowing plans.

As many as 21 states have opted for Option 1, under which states will be provided with a special window to borrow at rates at which government of India borrows. The amount to be borrowed under the first option is the amount of compensation gap due to implementation of GST.

This amount was earlier calculated to be Rs 97,000 crore, however, after the inputs form many states, the same has been revised and now the amount that can be borrowed under option 1 is Rs 1.10 lakh crore.

Finance Minister Nirmala Sithraman has said that no states will be denied compensation even if they do not opt for either of the two options proposed by the GST Council.

Meanwhile, the Council has decided to extend the levy of compensation cess beyond the transition period of five years, that is, beyond June 2022, for such period as may be required to meet the revenue gap.

The Council also decided to immediately release compensation cess of Rs 20,000 crore collected so far to States towards loss of revenue during 2020-21.