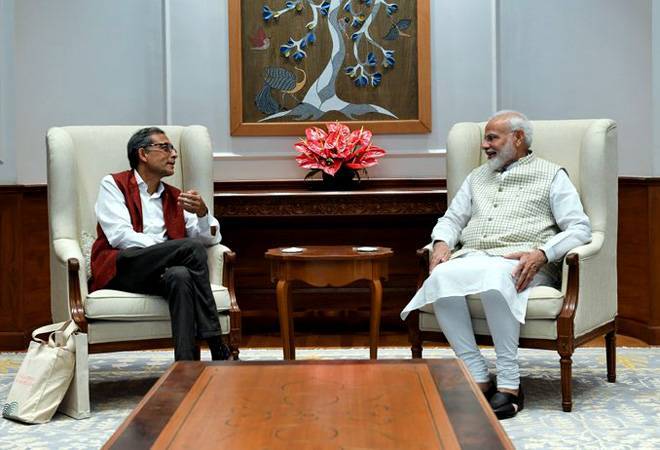 Nobel Laureate Abhijit Banerjee said it was a privilege to meet Prime Minister Narendra Modi. The PM, he said, was "kind enough" to talk about his vision of India, which was "unique". After his meeting with PM Modi at the 7, Lok Kalyan Marg residence, Banerjee said he and PM Modi talked about "governance and reforms in bureaucracy". The Nobel Laureate, when asked about his meeting in wake of his strong statements on the Indian economy, told reporters: "Prime Minister started by cracking a joke about how the media is trying to trap me into saying anti-Modi things. He has been watching TV, he has been watching you guys, he knows what you are trying to do."

Talking about his experience of the meeting, Banerjee said: "One hears about the policies but one rarely hears about the thinking behind it. He (Modi) talked about the way sees the governance, in particular, and why some say, maybe the mistrust of the people on the ground colours our governance, and how it, therefore, creates structures of kind of elite control over the governance process." He also said PM Modi explained how he's trying to bring reforms in the bureaucracy to make it more responsive to understand how people's views need to be taken into account and expose them to reality on the ground.

Indian-American Abhijit Banerjee, a professor at Massachusetts Institute of Technology (MIT), recently won the Nobel in economics, along with economists Esther Duflo and Michael Kremer, for their work on "an experimental approach to alleviating global poverty". He is in India to promote his book 'Good Economics for Hard Times: Better Answers to Our Biggest Problems', co-written with Duflo. Today, he will leave for Kolkata where he will visit his mother and spend two days in the city.

Earlier, PM Modi also tweeted about his meeting with Banerjee. "Excellent meeting with Nobel Laureate Abhijit Banerjee. His passion for human empowerment is visible. We had a healthy and extensive interaction on various subjects. India is proud of his accomplishments. Wishing him the very best for his future endeavours," he tweeted.

Excellent meeting with Nobel Laureate Abhijit Banerjee. His passion towards human empowerment is clearly visible. We had a healthy and extensive interaction on various subjects. India is proud of his accomplishments. Wishing him the very best for his future endeavours. pic.twitter.com/SQFTYgXyBX

The Nobel laureate's meeting with PM Modi holds significance against the backdrop of his criticisms of economic policies of the Modi government. While addressing a press conference at the Massachusetts Institute of Technology after winning the prize, Banerjee had recently said the Indian economy was "doing very badly". In his recent interviews, he has advised increasing taxes for the rich and making cash available for the poor to boost consumption.