The current crisis erupted last Friday when the Rajasthan Police sent a notice to Pilot, asking him to record his statement over the alleged bid to bring down the government 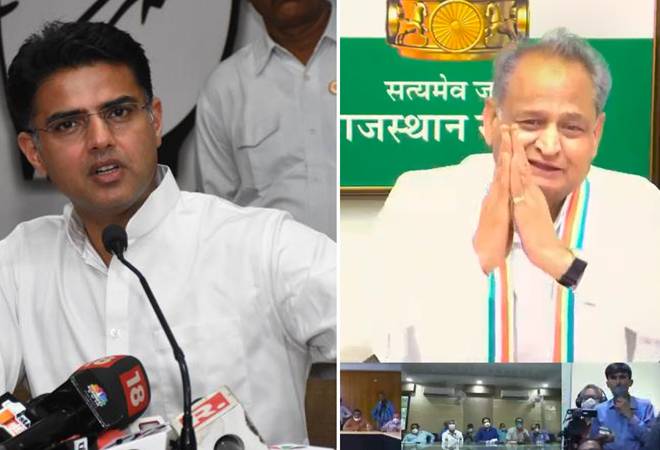 Rajasthan political turmoil: The rivalry between Ashok Gehlot and Sachin Pilot became prominent during the Rajasthan assembly elections in 2018

Amid hectic parleys, Pilot told media that he would not join the BJP.  "Such speculation is being fuelled to tarnish my image," he said.

Congress leader Kapil Sibal on Thursday also asked Pilot for "ghar wapsi" (re-joining the Congress party). Sibal tweeted, "False rumours spread to malign. Pilot : 'I am not joining BJP'  I guess then legislators at a hotel in Manesar is merely a vacation in Haryana's comfort zone under BJP's watchful eye. What about 'ghar wapsi'?".

Congress party sought the disqualification of Pilot and 18 other dissident MLAs from the Rajasthan assembly on Wednesday.

Now, MLAs of the Sachin Pilot camp are planning to file a plea in the Rajasthan High Court challenging the Speaker's disqualification notice. The MLAs owing commitment to Pilot are holed up at the ITC Grand Bharat Hotel in Manesar.

Pilot was sacked on Tuesday as Rajasthan's deputy chief minister and the president of the state unit of the party after he did not attend the Congress Legislature Party meetings. After being sacked, Pilot had tweeted in Hindi on Tuesday, "Truth can be rattled, not defeated".

The current crisis erupted last Friday when the Rajasthan Police sent a notice to Pilot, asking him to record his statement over the alleged bid to bring down the government.

The same notice was sent to the chief minister and some other MLAs, but Pilot's supporters claimed that it was only meant to humiliate him.

The Special Operation Group (SOG) had sent out the notices after tapping a phone conversation between two men, who were allegedly discussing toppling the Gehlot government.

The rivalry between Gehlot and Pilot became prominent during the Rajasthan assembly elections in 2018. Pilot has been upset since the Congress picked Gehlot as Rajasthan CM after the 2018 polls, while his own supporters insisted that he deserved credit for the party's victory as its state unit president.